Way Off Broadway Community Players will be holding open auditions on Monday, January 12, 2015 at 7 pm for the fourth production of our 18th Season, John Bernas’ hilarious A Little Murder Never Hurt Anyone. It is under the direction of Jo Rake. Auditions will consist of cold readings from the script. There are roles for 2 women and 4 men.

The Story: Rich, bored Matthew vows to kill his rich, bored wife, Julia, so he can become a jet setter like his friend who recently lost his wife. And so the game begins - a hilarious year-long match of wits and the witless. It seems that Matthew is successful in murdering everyone but Julia. There are several mysterious deaths that occur on the grounds of the family estate, a butler who is not what he seems, a detective who can't buy a clue, that is, not until Donald stumbles upon Julia and gentlemanly butler Buttram in what is perceived to be a compromising situation. He jumps to the conclusion that Julia is the murderer - trying to murder Matthew! Adding to the confusion are two innocents (sort of) caught in the hilarity as they plan their wedding. It ends in a nice bang and with a bit of a message about the importance of love. A spoof of and love letter to the screwball comedies of the 1930s and to stage mysteries in general. This is an evening full of witty dialogue and slapstick comedy.

Auditions are open to the public and will be held at Way Off Broadway Community Players’ theater, located in the 2243 Business Park at 11880 West FM 2243, Leander, 1 mile west of Hwy 183, just east of Bagdad Road. All interested parties are encouraged to audition.

Way Off Broadway Community Players is continually searching for performers, technicians, and other volunteers of every experience level. Additional information is available at our website, http://www.wobcp.org

Like us on Facebook. Get updates on auditions and show notices, learn more about the cast, and don't miss out on some great pictures. We're at: 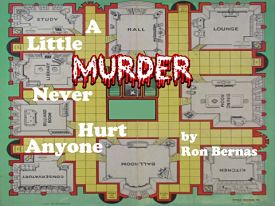