Bring It On: The Musical

* These dates and details are subject to change. All contingent upon COVID regulations and precautions.

Creators: From Emmy Award winners Allen Robertson & Damon Brown comes an original movie musical, the feel good story of the summer. Allen and Damon are known for their decade-long PBS show, The Biscuit Brothers as well as the Summer Stock Austin premieres, Tortoise and Hare, Steadfast Tin Soldier, Stone Soup, The Elves and the Shoemaker, Rob1n, and Haunted.

Tagline: What if it turns out that you actually knew the answers to life’s biggest questions . . . but forgot them?

Story: SCOUT is a comic musical fable telling the story of a single day in an ordinary suburban neighborhood as seen through the extraordinary lens of Scout - a vibrantly imaginative soul on the verge of a major change she can’t control.

Cast: We’re seeking a diverse cast of singers, dancers, actors ages 14-23. All body types and all skill levels. Not all roles will require singing and/or dancing. Everyone is encouraged to apply. This ensemble piece will be tailored to fit the strengths of the final cast. Keep in mind this is for film so we're looking for something authentic and honest. We want to see YOU not the material. We’re looking for collaborators.

Distribution: The film will be submitted to film festivals, played locally at outdoors including a premiere event, and packaged for an educational program to be distributed to schools across the country.

Bring It On: The Musical

Loosely based on the film about high school cheerleaders, Lin Manuel Miranda's Bring It On: The Musical will be performed as an outdoor interactive experience and will also be available for streaming. A diverse cast of 30+ and a crew of 20+ will bring to life a story about high school cheerleaders from rival schools, who learn to respect each other and by the end of the show, celebrate their true victory: friendship.

A senior head cheerleader whose world gets turned upside-down when she transfers schools. She is constantly working towards the goal of a championship and her "one perfect moment". After using her friends to exact revenge, she realizes that friendship is much more lasting than a trophy.
Gender: Female
Age: 17 to 19

The head of the Jackson dance crew. She has fought her way from nothing to make a name for herself, which leads her to not put a lot of stock into people like Campbell. But she has a tendency to bring down her walls and embrace a true friendship.
Gender: Female
Age: 17 to 19

One of the Jackson dance crew. Not the sharpest person on the squad, but is loud enough to make up for it.
Gender: Female
Age: 16 to 19

Jackson's school DJ, mellow and friendly. A true Cinderella story, working his way from a dorky freshman to a smooth senior. He becomes attracted to Campbell for her heart, bravery, and determination.
Gender: Male
Age: 17 to 19

A transgender woman. Any ethnicity. Her gender is simply not an issue, accepted by her friends, barely referred to. BFFs with Nautica and Danielle. Has a wicked tongue but a generous spirit.
Age: 15 to 19

The only male cheerleader on the Buccaneers and Campbell's boyfriend. Tender and comforting, but not the most adept to his surroundings.
Gender: Male
Age: 17 to 19

One of the Buccaneers cheerleaders. An extremely loyal follower of Skylar who keeps her intelligence hidden under a bushel.
Gender: Female
Age: 16 to 18

Campbell's neighbor and the newest member of the Buccaneers cheerleaders. Her initial impression is one of naiveté and meekness. But she proves to be a social climber who schemes to take over Campbell's life at any cost.
Gender: Female
Age: 15 to 18

One of the Jackson students and a hip-hop artist. His hormones make him lust after Bridget.
Gender: Male
Age: 15 to 19

The mascot for the Buccaneers. Nerdy and out of shape, but she strives for a place on the cheerleading team. Despite being an outcast, she has a good heart and a great spirit.
Gender: Female
Age: 15 to 19

One of the senior Buccaneers cheerleaders. Her popularity has given her quite the mean streak, though she does not have the brains to make up for it.
Gender: Female
Age: 17 to 19

One of the Jackson students, a hip-hop artist. A combination class clown and attempted ladies' man, but he strives for fame and fortune.
Gender: Male
Age: 16 to 19

Click HERE for full application information for SSA Apprentices --  students and professionals who have completed their first year in college or are age equivalent, with a focus in one of the non-performing aspects of theatre production*. SSA apprenticeships are paid positions that require specific qualifications. 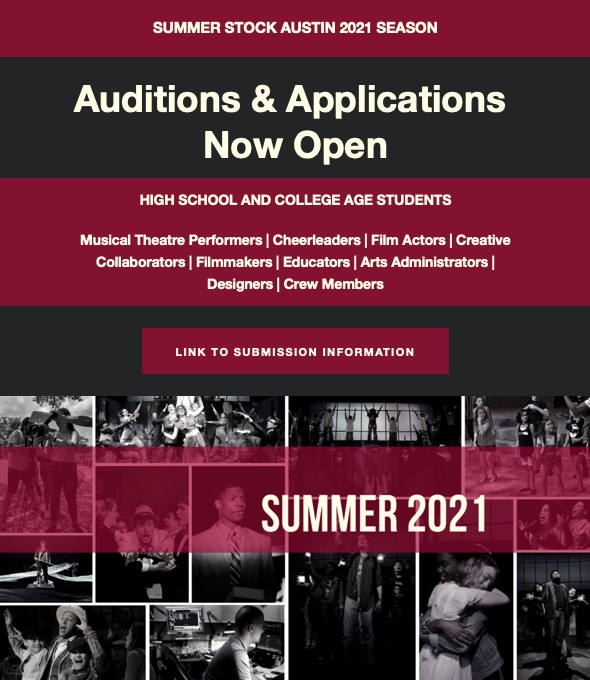 A summer intensive musical theatre production company made up of students from high schools, colleges and universities, staging two major musicals and a musical for families during the summer at …