Spies, murder, love, and other trademarks of Alfred Hitchcock come to life in the style of a 1940s radio broadcast of the master of suspense’s earlier films showcasing The Lodger, Sabotage and The 39 Steps. This is the formidable Hitchcock of an older vintage before he came to America, before he met Cary Grant, Ingrid Bergeman and Grace Kelly, working full power even before the days of talking pictures. Opening up new realms of suspense.

This is the Hitchcock of the 1920’s and ’30’s—a familiar figure in many respects, but also one with qualities that will surprise as well as please those who haven’t gone back far enough in time to get acquainted with Hitchcock as he was in the process of becoming the master of suspense, thrillers, romance…with haunting amusement and wit. This production is a triple feature, complete with vintage commercials, that recreates a daring train chase, a serial killer’s ominous presence, and a devastating explosion through the magic of live sound effects and musical underscoring. This spooky, exciting piece is perfect for an evening of theatre…

Spooky! Exciting! Spies, murder, love... all the trademarks of Alfred Hitchcock come to life in the guise of a 1940s radio broadcast. This triple feature sweeps you into the studio audience as you thrill to The Lodger, Sabotage, and The 39 Steps, complete with vintage commercials and the magic of live sound effects; recreating all the edge-of-your-seat atmosphere that made Hitchcock a household name.

Way Off Broadway will hold open auditions for the play "Vintage Hitchcock: A Live Radio Play" by Joe Landry at 7 pm on Monday, November 4 at the theater.

At least 2 or 3 Females, 2 or 3 Males; actual number to be determined by director
All actors will play multiple parts giving readings as part of a radio drama.

It's going to be set in a 1940's radio station setting. The actors will be moving and interacting with each other, just not tons of blocking. IT WON'T BE "STAGED" READINGS. They will have their lines memorized. They will have their scripts with them, as they did when doing the radio shows in the 40's, but the actors will not be "reading" them. (they will use them as cheat sheets!). Each act is a different Alfred Hitchcock show, edited, but will be the show from beginning to end, keeping all the suspense of the full length show. Not just excerpts. The actors will be performing 3 separate Hitchcock shows, in condensed form.

The actors will be playing actors playing the various roles. Multiple roles for each show they are performing. They will need to be able to be different voices/characterizations.

The actors will also be doing some of their own sound effects.

And they will be in costume. Basically bringing our audiences into the radio of the 1940's.


Auditions consist of cold readings from the script. A resumé and photo would be helpful but are not required. Bring your personal schedule to identify conflicts with rehearsal and performance schedule. We are located at 11880 Hero Way West, Bldg 4, Leander, TX 78641 (behind Smokey Mo’s). 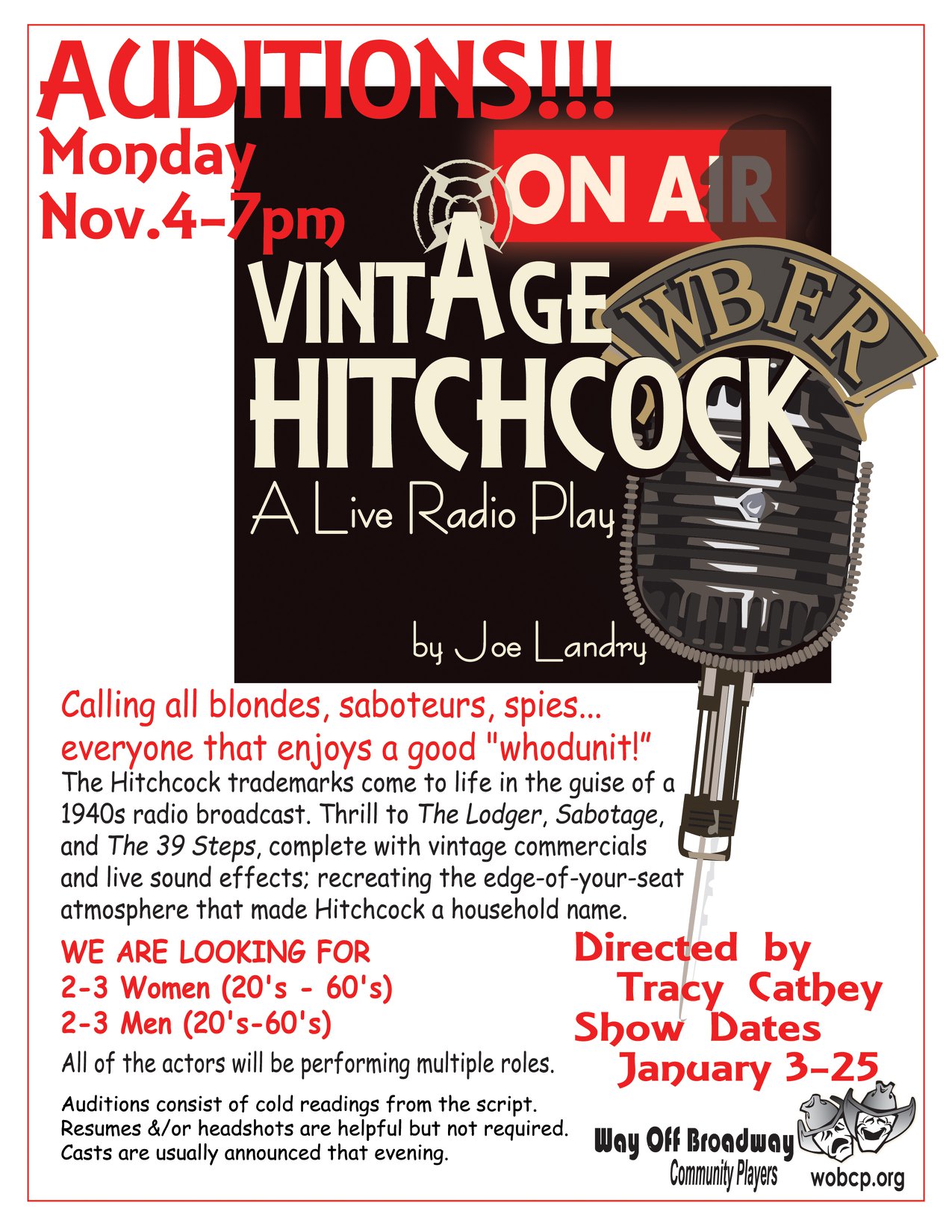