Anybody for Murder?
by Way Off Broadway Community Players

Not only an exciting thriller but an evening of hysterical comedy. This ingenious play is written by the team that brought us A Sting in the Tale. Max is planning to murder his wife Janet, collect her life insurance, and enjoy life with his girlfriend, Suzy when cousins Mary and George arrive on their Greek island with news: Mary and Janet are beneficiaries of a huge fortune. Plans and plots hatch, and soon everyone is bent on murder. All that stands in their way is the presence of the next door neighbor, who knows a thing or two about murder, crime writer Edgar Chambers. This thrilling comedy is by the writer of the television series The Avengers.

The Characters
Janet Harrington – Is an attractive middle-aged lady, who is married and in love with Max, in spite of his wondering ways. She has a slight lisp with her “R’s” and “W’s”, a wide-eye innocence that seems to be more naive than she really is. She also has long (blonde) hair.
Susy Stevens – Is a very attractive, young sexy bombshell with a good figure and who is fully devoted to Max and his plans. She also has natural short dark (red or brunette) hair.
Mary Ticklewell – Is Janet Harrington’s 2nd cousin. She is a middle-aged married woman, who is outwardly pleasant, yet gushing woman who is strong-minded with a rather controlling nature over her husband. Like Max, she can be scheming and manipulative to get what she wants.
Max Harrington – Is an ex research chemist, who has moved with his wife to a Greek island to start their own vineyard. He is a middle-aged, attractive, charming man who is both a sharp dresser and a womanizer. He is intelligent, manipulative and uses his charm to get what he wants.
Edgar Chambers – Is the Harringtons' neighbor who also lives on the island but is some walking distance away. He is a middle-age single man, who is tall and thin and generally looks rather untidy. He is a bit of an eccentric would-be murder mystery writer, who is working on his first novel.
George Ticklewell – A pleasant, yet slightly pompus, hen-pecked husband to Mary. Although he is moderately successful attorney, he is inappropriately dressed and just generally unsure of himself.

The auditions are open, with no pre-registering or scheduling. Our auditions are typically held at the WOBCP Theatre early in the week following the opening of our previous show. The auditions will typically consist of cold readings from the script.

Once you arrive at the theatre, you’ll fill out an audition form, listing your experience, and which roles you are most interested in. Prior to the audition date, biographical information about the roles will be posted to the show’s page on this website. If you have a headshot and/or resume, please bring them, but they are not required. 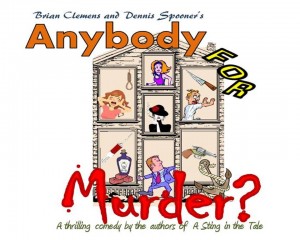