In this laugh out loud Texas Farce, the Futrelle Sisters are in trouble – again. Their beloved hometown, Fayro, is in danger of disappearing, and it’s up to the sisters to save it from extinction! Ever since the Super SmartMart and the rendering plant closed, folks have been leaving in droves. But a solution is at hand! A salsa factory is looking to relocate, and they are coming to town on a scouting mission. Unbelievable promises are made in order to woo the rep to choose Fayro—such as that on the very weekend of the rep’s visit, the town just happens to be having their biggest celebration of the year: “Fayro Days”, which includes a craft show, a pet costume parade, a beauty pageant and a huge Civil War battle reenactment…with only 15 people! So now it’s up to the remaining citizens of Fayro to quickly make these promises a reality. Added to this is the dilemma of a desperate bride-to- be attempting to practically drag her unwilling groom to the altar, a husband’s mid-life crisis coinciding with his wicked old Aunt’s visit – and the panic as she drops dead – right before the Salsa Rep comes to town. But everyone pulls together to save their town in a testament to Southern strength and ingenuity—and a recipe for total hilarity!

The Characters
Geneva Musgrave – The crusty owner of the only flower shop in town. And she doesn’t let you forget it.
Honey Raye Futrelle – A sexy, vivacious go-getter. Loves to be the center of attention. And is always looking for her next marriage…of which she’s had a few. The second oldest Futrelle sister.
Gina Jo Dubberly Waverly – Honey Raye’s niece. She’s young, inexperienced in the ways of love, naïve and earnest. Recently named Cow Inseminator of the Year.
Rhonda Lynn Lampley – The oldest Futrelle sister. She’s a fun loving ball of fire. Nothing grows under her feet. Co-owner of the Dairy Dog eating establishment
Twink Futrelle – The middle Futrelle sister. She’s determined and practiced. Door to Door cosmetic saleswoman. Is happy to be engaged. Finally. Even if she’s the one who had to do the asking.
Frankie Futrelle Dubberly – The youngest Futrelle sister. She’s sensible and down to earth. Seems to be the glue that keeps the family together. Her motto is “Pray for sunshine, but always be prepared for rain.
Iney Dubberly – Dub’s elderly aunt. The meanest, most cantankerous old woman you can ever hope not to meet. No one is really sure she’s actually ever liked anyone…or if she’s not the spawn of the devil.
D. Dayva Davidson – A smart, well-dressed visitor to Fayro – and the B&B’s first guest. Raynerd takes it upon himself to show her the sites.
Justin Waverly – Married to Gina Jo. He’s nervous and sincere and just happens to be the Pastor at The Tabernacle of the Lamb.
John Curtis Buntner – A straight-laced and dedicated deputy sheriff. Just happens to be the fish that Twink finally caught in her net. And wishes he had swum clear.
Dub Dubberly – Married to the youngest Futrelle sister. He’s a beleaguered good ol’ boy, been unemployed for several months. Keeps looking for ways to divert the fountain of youth to his door.
Raynerd Chisum – an uncomplicated man-child. Friends of the Futrelles, and works at the Dairy Dog. Always eager to help in any way he can.
Buck Strickland – An upbeat, take-no- prisoners type of guy. Another visitor to Fayro. 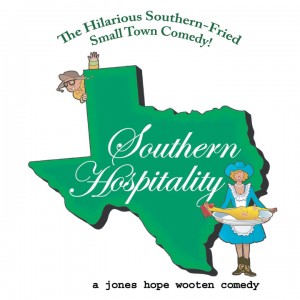