The Curate Shakespeare As You Like It
by The Baron's Men

This unusual piece is subtitled "The record of one company's attempt to perform the play by William Shakespeare." When the prolific Mr. Nigro was asked by a professional theatre company to adapt As You Like It so that it could be performed by a company of seven, he devised a completely original play about a ragtag group of players led by a dotty old curate who must present Shakespeare's play. The dramatic interest and the comedy derive from their hilarious attempts to impersonate all of Shakespeare's characters. The play has had numerous productions nationwide and has become an underground comic classic.

Thursdays, Fridays, and Saturdays at 8 p.m.

ROSALIND—she’s gone mad, but in a cheerful way. Knowledgeable but batty at the same time.

CELIA—so over everyone around her. Not here to make friends. Her sensitivity is buried deep under a layer of attitude.

AUDREY—not the sharpest knife in the drawer, but manages to pull off playing Rosalind when no one believes in her.

THE CURATE—de facto director of the group. Very confident. Demanding.

AMIENS—keeps his head down and does the work. Unfortunately, he flubs his big speech (repeatedly).

Rosalind, Celia, and Audrey should read as female; Amiens and William should read as male; The Curate and The Clown could be either or neither. That said, I am open to flexibility with all the roles. Audition for the part that speaks to you.

Auditions by appointment only. For info, please email director Kate Clark via auditions@thebaronsmen.org . 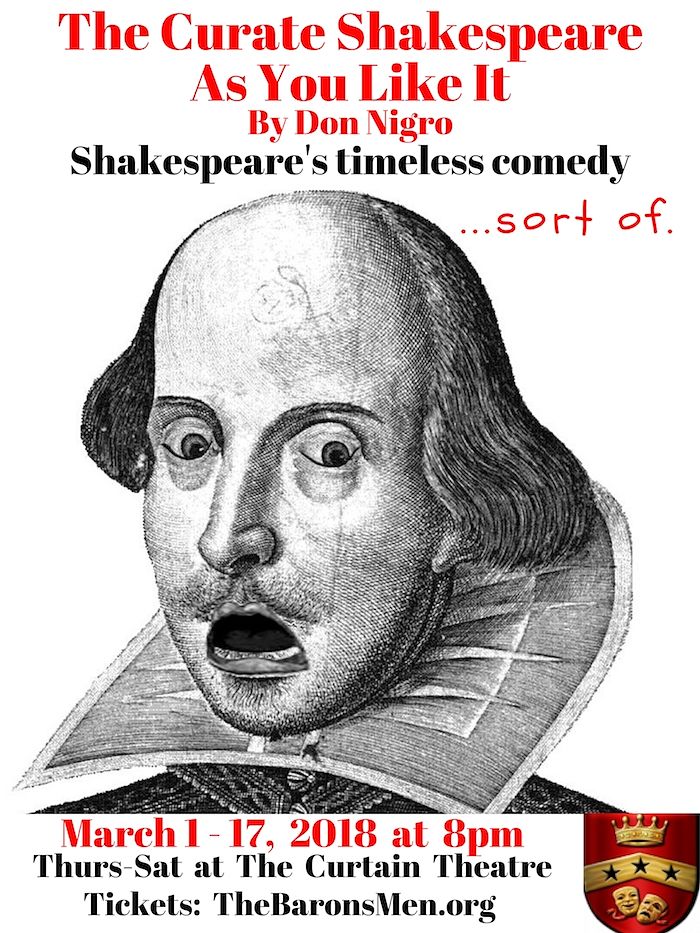