Till Beth Do Us Part
by Way Off Broadway Community Players

A career-driven wife Suzannah, needs a lot more help on the home front than she’s getting from her husband, Gibby. Enter Beth as the newly-hired assistant, a gregarious, highly-motivated woman who whips the household into an organized, well-run machine – at the perfect time. Suzannah’s, boss is flying in from London for an important make-or-break business dinner. Gibby grows increasingly wary as Beth insinuates herself into more and more aspects of their lives, and into Suzannah’s career. Beth is given carte blanche to change anything in the household that “will make it run more efficiently.” And the change Beth makes is convincing Suzannah that Gibby must go! When he realizes it’s Suzannah’s career Beth is really after, a newly-determined Gibby sets out to save his marriage aided by Suzannah’s best friend, Margo, and his best friend, Hank. Their effort to stop Beth goes uproariously awry just as the boss arrives for that all-important dinner. Whether you’re married, single, rethinking your divorce or currently being controlled by someone up to no good, you’re sure to enjoy this family-friendly, laugh-out-loud, fast paced farce!

Gibby – comfortable in life – sees no need to change anything. Everything is going along fine, if not exactly planned, then according to expectations. Expectations are somewhat basic – keep working, build the man cave, improve golf game, stay friends with kids and allow Suzannah to have her ‘career’. Doesn’t mind her working as long as it doesn’t interrupt his domestic tranquility – and dinner.

Suzannah – pleased with life so far, but believes it is time for a new challenge. Fulfilled her perceived (and enjoyable) obligations regarding home, family and husband. Now that the kids have moved out she is highly motivated to move on to ‘her turn’. Resents, but tolerates Gibby’s complacency – recognizes that while he may not contribute to her plans he will ‘allow’ them – knows she needs support, but not sure how to obtain it. Frustrated, but determined and very focused on her opportunity.

Margo James and Hank Russell – basic ex ‘king and queen of prom’ couple – for both life peaked in high school – unable to focus on life after perceived glory days, they took to blaming each other instead of focusing on working towards a better future. Looking over the horizon instead of seeing what is directly in front of them.

Margo – still looking for her Prince Charming and painfully aware of just how many fro… uh… disappointments there are out there. Very loyal to both Haydens – doesn’t quite understand their ‘perfect’ marriage, but strives to find a something even better.

Hank – always on the look for his next ‘conquest’ – unaware of the parody of himself that he has become – prides himself on his appearance and fitness as he always wants to be ready for his next reunion, tryout or date – proud of wearing same belt size as in high school, ignores the fact that he has to wear pants a little lower and sometimes has trouble breathing.

Beth Bailey – ruthlessly efficient, highly driven, professional assistant. Oozes southern charm to the point of disbelief.  Is she really what she appears to be? And just who is she really trying to assist?

Celia Carmichael – shrewd, successful business woman. Willing to hide her acumen under the guise of genteel dizziness in order to gain advantage or to ease efforts of dealing with colonials. 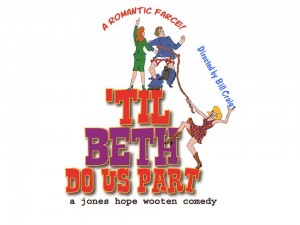