Tonight’s Gonna be a Good Night: A Review of Zach Theatre’s A Christmas Carol, 2015
by Brian Paul Scipione

EXPLOSIVE AND CHARMING, two adjectives very little aligned, are actually the most apt description for Zach Theatre’s 2015 interpretation of Charles’ Dicken’s classic A Christmas Carol (ACC). An usher in the lobby warned me on the way in, “Take everything you remember about A Christmas Carol from your childhood and forget it.” His endearing enthusiasm was enough to excite the most suspicious Scrooge in the place.  And true enough, the performance took a few liberties with the premise but for the most part remained faithful to the tried and true, tear-inducing tale of a grumpy old man who learns the true spirit of Christmas thanks to the appearance of four audacious ghosts. The apparitions spend the night of Christmas Eve in turns delighting and terrifying him with scenes from the past and the possible future.

You might be thinking, yes we all know the story, but the truth is we don’t all know the story and it is to the neophytes in the audience that the action is geared,-- I mean, of course, the children. This version of ACC is full of songs, pratfalls, colorful costumes, songs,stage effects with  a trap door and props, over-the-top accents, songs, smoothly moving scenery and, yes, more songs.  It is in this cornucopia of musical selections that director Dave Steakley finds the heartbeat of this production, and let me tell you: It's is a very, very rapid heartbeat. 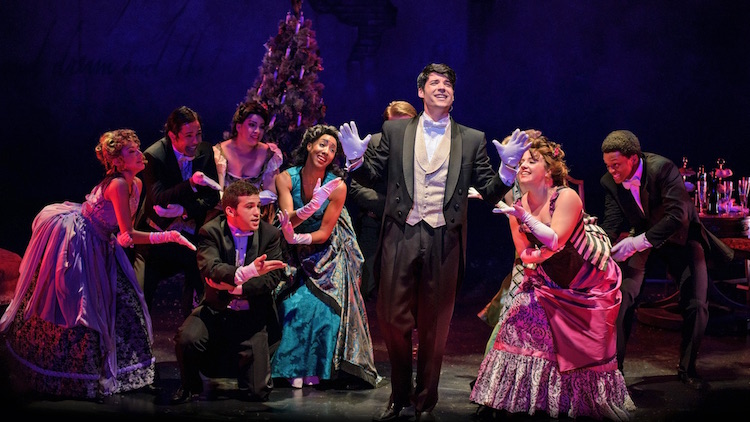 The play opens with Scrooge’s Nephew Fred combining narration and singing as he brings us into the story en medias res.  Rock classics, modern day pop songs and traditional Christmas carols all throw their hats into the ring during the first twenty minutes of the show. Nearly every moment brings a prompt for a song. Fred visits his curmudgeon uncle to invite him over for Christmas and sings three songs to convince him to come. Then the two gentlemen collecting for charity come to solicit Scrooge--  to no avail, but they try anyway with two songs (including a rousing rendition of The Doobie Brother’s Long Train Running).  When this falls to weaken the man’s heart of stone they attempt a third song with Fred and a delightful Bob Cratchit joining in. The response from Scrooge is as expected. So Fred takes his leave of his uncle with another song.

Going to the Zach Theatre is a wonderful night out.The organization is first class, from the live piano music in the lobby, the specialty hand-crafted cocktails, the photo ops, to the stately building and grounds. This is the closest Austin gets to Broadway, and every production is meticulously crafted.  ACC is no different. The sound design is deft and all-encompassing, whether it is the entire cast singing or a mere stage whisper, nothing is missed by the audience and nothing is overbearing.  The set design is on point, with its rotating stage and swooping flies of scenery.  The pacing of the play is perfectly timed to keep the action almost continuous. The transformation of Scrooge’s four-post bed into a stage coach is especially ingenious. 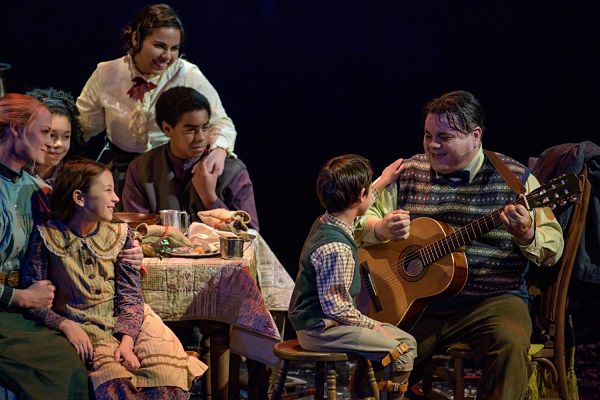 As to be expected, what makes this production a rousing good time is the professionalism and alacrity of the ensemble. The character choices are fairly typical of the archetypes the performers are playing. Scrooge is grumpy, Fred is convivial, and the townspeople are beleaguered. The notable exceptions include Paul Sanchez as Bob Cratchit.  Sanchez manages to keep a sanguine grin on his face while betraying it with a heaviness of brow that beautifully exhibits his character’s internal struggle beneath his ever optimistic exterior.  Not to mention the operatic zeal of his version of O Holy Night, which absolutely brought down the house. 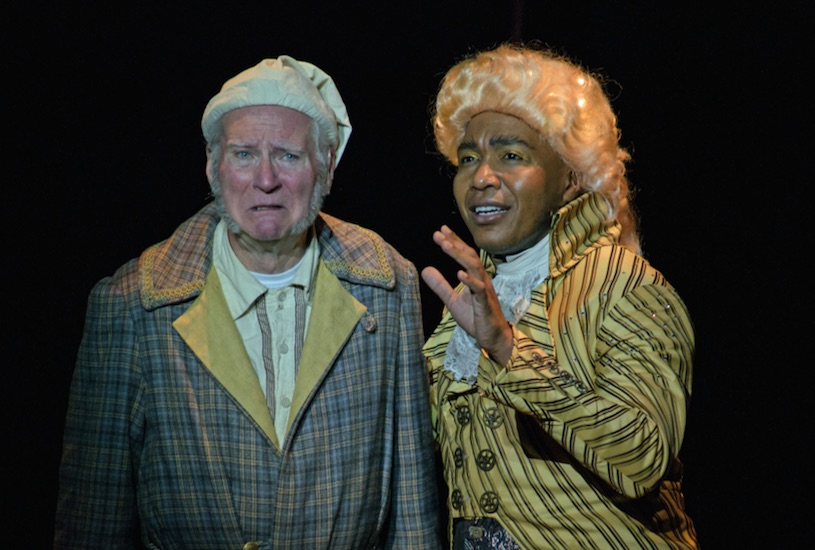 Kenny Williams as the Ghost of Christmas Past peppered the audience with side-splitting asides for comic relief. His take on the ghost that shows Ebenezer the mistakes and glories of his past was innovative and charming.  Like a lounge singer you'd want to follow you around and narrate your life, Williams fires up the show's already rapid pacing with smooth singing and his ever coy smile. Finally, Joel Mercado-See's channeling of Bruno Mars was a delight. 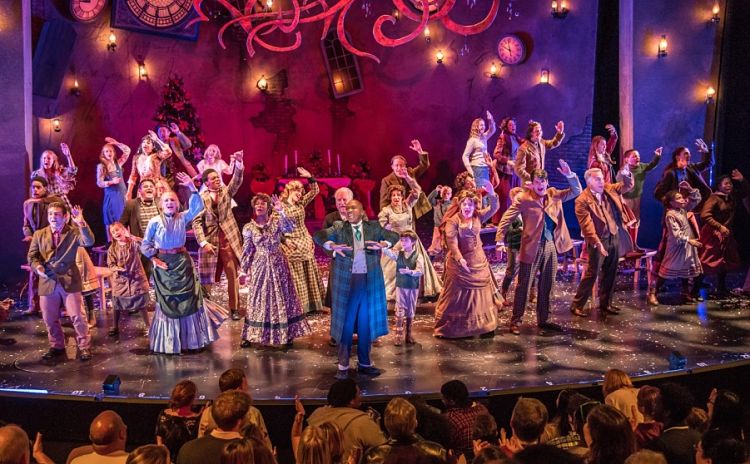 The 2015 production of A Christmas Carol is a must-see for families with children and anyone in need of a booster of Christmas cheer. It’s fun and well-crafted, but beyond that it is positively infectious with joy.  The song choices from Happy, Best Day of My Life and the Black-eyed Peas' I Gotta Feeling all reflect the underlining message of the play: believe in Christmas and in your own ability to change your life, and the world is your oyster. 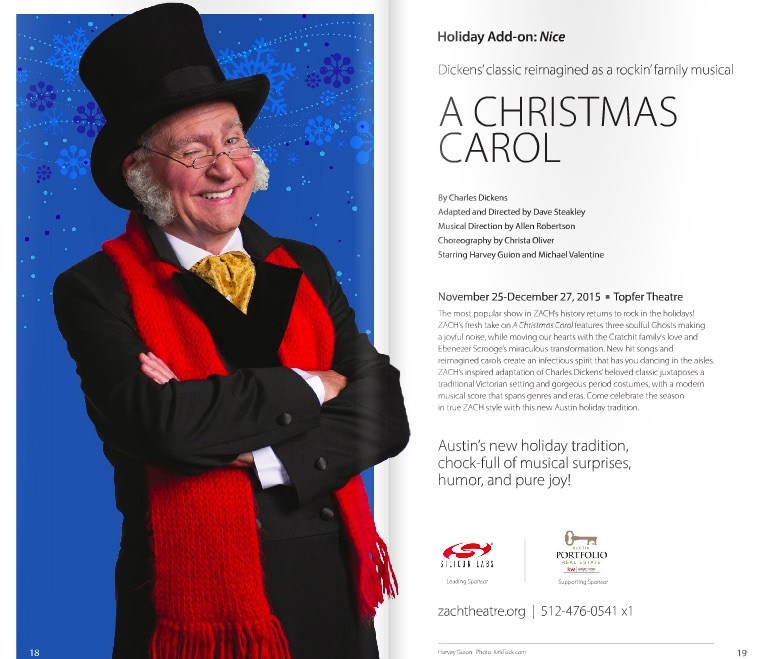