Review: Women in Search of Love by FronteraFest
by Michael Meigs

Last Saturday's FronteraFest "Best of Week 3" brought us a lot of yin and very little yang. Of the five pieces brought forward, four were solos by actresses. 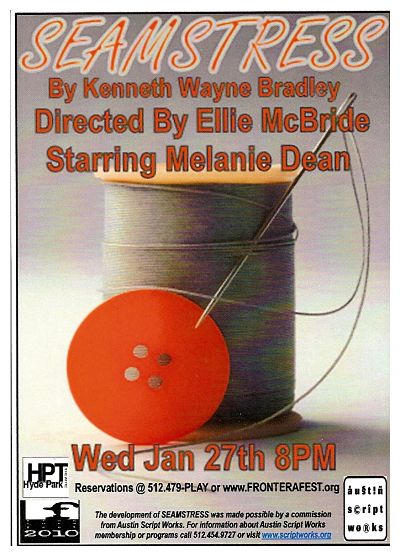 Yang did hold its own. The six "Confidence Guys" who did improvised Mamet gave us that playwright's expletives, elisions, incomplete understoods and macho pushiness to the life. After a quick poll of the audience they played it as salesmen in a failing car dealership. Maybe it was a set-up, but they had the edgy macho attitudes down pat. It could have been City Theatre's 2008 Glengarry Glen Ross if they'd substituted real estate for the automobiles.

Melanie Dean was there as Lo, the seamstress from small town Texas, as I had predicted in an ALT review earlier in the week. It was a pleasure to hear the story of Kenneth Wayne Bradley's Seamstress a second time and to appreciate Dean's interpretation of that woman of simple heart and serene confidence.

Seattle performance artist Keira McDonald ended the evening with a wild, wild piece sending up the female astronaut who went nuts back in 2007 and drove across the country to pepper spray a love rival. I did a February 1 review of McDonald's Astronaughty for Austinist.com, part of ALT's outreach for new readers. 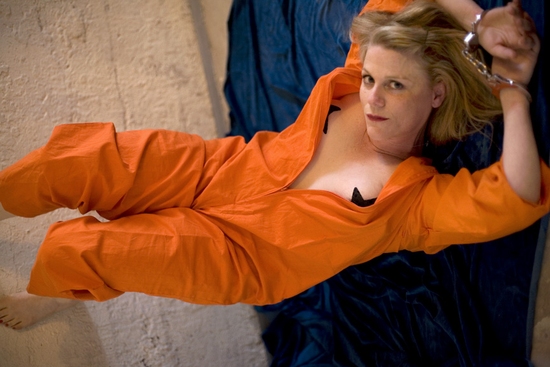 The two other solo monologues were meditations on the search for love. Brash Krissi Reeves and thoughtful Joy Loveall were single women looking at that subject at different ages, from different life stations and with different expectations. Women at different points along the Tao. 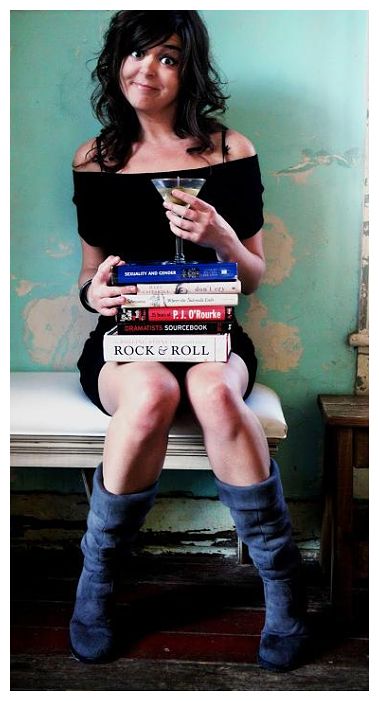 Reeves, pictured above, is a fast talker, in love with words and concepts, throwing herself at this world with its 3.5 billion men, churning hard, keeping score and dampening her disappointment with the red wine that she swigs emphatically during her heart-to-heart with us. Twenty-four first dates over the last 365 days, of which only three led to repeat contact.

Reeves is a funny, self-critical bundle of needs and nerves, the sort of friend who would probably call you up at 2 a.m. just because she needs to talk. I liked her sharp writing better than her rushed delivery, and I kept thinking that if she would give those words to someone else, they would fly higher. Her Spinning the Bottle is "an existential comedy for the cynical romantic." She delivered it sitting on the couch most of the time, and it had bright hard surface of open-mike comedy, the sort that's all brain making fun of the heart.

Joy Loveall's program description of The Sex of Joy was right to the point: "a humorous glimpse into the world of a woman unexpectedly single at 50 as she explores sex, love and intimacy and seeks the lessons to be learned in each experience." Attractive, looking youthful and speaking to us with disarming directness, the pseudonomous actress was almost a first-timer ("Her last big gig was many moons ago as Bottom in A Midsummer Night's Dream at an all-girls high school.") She found herself alone at age 50, Joy told us, giving only a few words in passing to a vanished marriage and none at all to the breakup. She turned to friends, a couple with an open marriage, because she needed to be held. Joy Loveall explored for us the delicate emotional tissues of the resulting relationships, without subjecting us to statistics or to grotesqueries. Calm, confiding and without apparent buffeting of overwhelming immediate needs, Joy was all heart, engaging us as if we were standing with her on a terrace in a long summer evening.

Best of the Week at the FronteraFest - five short pieces