Review: The Skin of our Teeth by Different Stages
by Michael Meigs

Thornton Wilder's The Skin of Our Teeth is 67 years old but it plays as if it had been written and workshopped last week by one of those Austin indie arts groups of which we are so proud.

It's wild stuff --a history of humankind as embodied by the Antrobus family, with a mad mix-up of times, epic figures, surreal settings and primal myths. Refract that story through the lens of a dramatic structure that the author and actors keep turning into a kaleidoscope, dress it up with Lowell Bartholomee's videos, and live with the fact that you never know what's going to happen next. 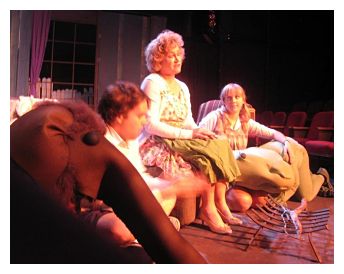 Wilder wasn't shy about announcing the epic proportions of this tragicomedy. The family's last name is "Antrobus" -- a label that shouts "human being" or "humankind," derived from the Greek άνθρωπος ("anthropos" -- as in, for example, "anthropology").

Your first act is located in an apparently modern New Jersey, except that it's not modern -- the Ice Age is encroaching. Pert, buxom maid Sabina, played by Amy Lewis, is our chatty chorus, occasionally lapsing from character to comment as Amy Lewis, an actress playing the part of Sabine. Mr. Antrobus is at his office or workplace, working on the alphabet, until he brings home his new invention, the wheel. 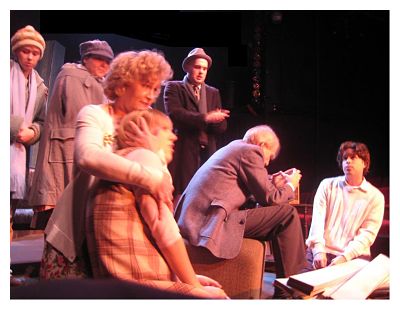 It's so cold outside that the dogs are sticking to the sidewalks. Mrs A and the kids let the pets into the house -- both the midget woolly mammoth and the dinosaur. Son Henry (previously named "Cain") shows an unhealthy obsession with slingshots and violence, while daughter Gladys is a dreamy blonde teen whose skirt keeps riding up. When Dad finally gets home he is followed by a huddled mass of people seeking refuge. Mom relents and lets them in.  We meet the prophet Moses (straight out of the shtetl), the blind poet Homer (looking like a panhandler) and three of the Muses. Lights go down on the set. An instrumental of a familiar television cartoon theme blares to announce the intermission, giving us a giant intertemporal wink not possible back in 1942.

Wilder gives us three acts, and Different Stages invites us to patronize the Vortex cafe-bar at their intermissions. I heard that the girlfriend of one of the 17 players in the cast complained that The Skin of Our Teeth was "a really long play," but with those pauses and the astonishing twists of each act, I was never aware of elapsed time. 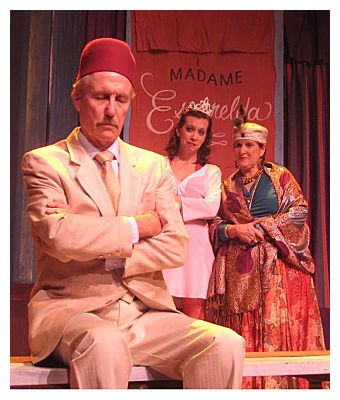 Act II is at a seashore town, where Antrobus is sworn in as President of the Fraternal Order of Mammals (his red fez suggests that like Shrine International, the FOM could stand for all manifestations of civil society). Mom frets about those hopeless kids, the fortune teller tells Dad's fortune and ours, and the slinky red-clad Sabina, recently the winner of a beauty pageant, decides to entice and seduce that interesting older man.

Rowdy conventioneers mock the action and one another. This pleasure garden suggests the celebration of wish-fulfillment and the briefness of pleasure. Imagined real life intrudes: that chatty Amy Lewis playing Sabina gets into a wrangle with stage manager Suzanne Balling and refuses to play a scene: "It would be just too upsetting." 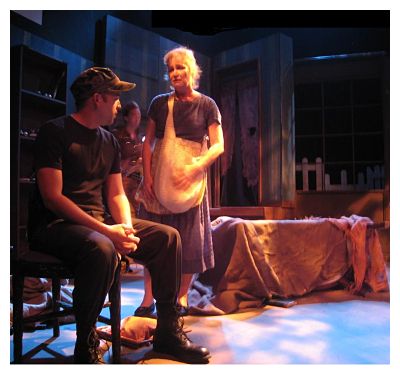 Act III, inevitably, is New Jersey in a world of war (with no prompting from script or players, I flashed on the Talking Heads' Life In Wartime). Women and children are hiding in the cellar, cute-butt Sabina looks even better in shapeless fatigues, and Dad comes looking for the enemy: his own son. Again, Wilder bends the rules of this stage world: Michael Hankin, playing the intrepid but fatigued Mr. Antrobus, tells us that seven cast members got food poisoning from the lemon meringue and they're over at St. David's getting their stomachs pumped. We will have to accept some of the miscellaneous crew members walking through the roles of the great philosophers as they visit the drowsy Antrobus couple at designated hours of the night. The last of these imperfect ghostly visitations, at midnight, is the author of the Book of Genesis. . . .

The show's title is drawn from a first-act remark by the juicy Sabine, "We escaped the Depression by the skin of our teeth. . . ." Timing for this mounting of the play is propitious, considering that we've just lived through the evidence that economists were entirely too optimistic about the prospects for dampening the business cycle.

There's lots of talent in this show. Bobbie Oliver as Mrs. Antrobus at the 5000th anniversary of her wedding to Mr. A is the eternally vigilant and long-suffering Wife. Michael Hankin fits nicely into Antrobus as Everyman, by turns smug, tempted, concerned, ferocious, deeply bitter about offspring, ultimately tired out but always beginning again. Amy Lewis as Sabine keeps us firmly anchored in Wilder's non-reality, courting the audience as adroitly as she courts Mr. A.

Andrew Matthews as son Cain/Henry moves with impressive facility from the goofy adolescent of Act I to the hunted and hunting soldier in Act III, with an appealing additional turn as an edition of himself, Andrew Matthews the actor, when Wilder again breaks the stage conventions. Blumensaadt has recruited a lively and vivid bunch of supernumeraries for the cast, including particularly Suzanne Balling, C. Robert Stevens, and Karen Jambon.

Wilder's piece premiered in New York in 1942, less than a year after Pearl Harbor. One understands the pessimism of the third act but also understands the message of eternal rebuilding atop the rich detritus of Western culture.  The Skin of Our Teeth won the Pulitzer prize,  but it lasted only 347 performances in New York. It was undermined in part by an assertion that Wilder had somehow copied it from Joyce's Finnegan's Wake (!). Its disappearance was probably more directly due to the relentlessly cheerful gearing up of the U.S. populace for a world war (a mindset neatly replicated this week, by the way, by The 1940s Radio Hour just put on by the Austin Community College choir). 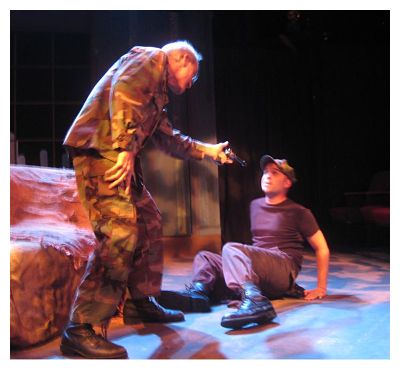 IMDB.com records that The Skin of Our Teeth was never turned into a feature film.  The video market offers only one video, presenting the stage version taped in 1983 for broadcast by public television.

Wilder's Our Town became the staple of high school English classes and an innovative New York revival has prompted new interest in that script.  That could happen with The Skin of Our Teeth.  Norman Blumensaadt and his friends show us the relevance for a cyber-age audience of the themes, the amusements and the wild juxtapositions.

But don't count on it. Grab the chance to see this production.

All GACA "A-Team" reviews at NowPlayingAustin

Review by Barry Pineo for the Austin Chronicle, November 26

Backgrounder by Robert Faires in the Austin Chronicle, November 19: "Forgotten Radical: Thornton's Plays Are Wilder Than You Remember"

Click to view program for The Skin of Our Teeth by Thornton Wilder, done by Different Stages

The Skin of our Teeth
by Thornton Wilder
Different Stages 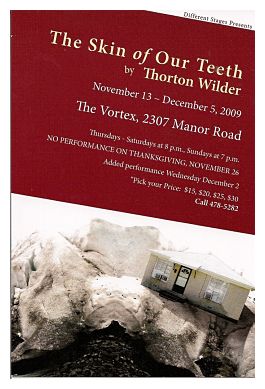