Review: The School for Scandal by The Vortex Repertory Theatre
by Michael Meigs

Summer theatre programs for young persons are wonderful. I got my own start treading the boards in just such an enterprise. The Vortex Repertory in east Austin has run its tuition-free program for 13- to 17-year-old actors since 1991. The theatre has racked up awards and the participating students have gotten their own rewards, intrinsic and experiential. For this production of Sheridan’s School for Scandal the company of 14 actors worked with Vortex resident artists Betsy McCann and Gabriel Maldonado (directors) and Stephen Fay, as well as a full technical team of Vortex regulars. I attended the Thursday, July 31 performance of their second and final weekend, for which the 150-seat theatre was two-thirds full.

The School for Scandal was staged in May, 1777, at the Drury Lane Theatre in London, which Sheridan had purchased from the famous David Garrick. 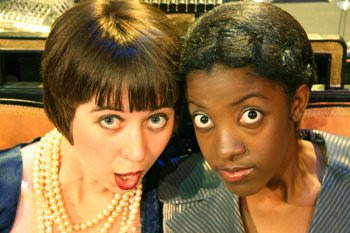 The text is a challenging read and even more challenging in presentation. Sheridan creates for us the glittering world of London aristocratic society, peopled with bejeweled gossips, the idle, and the profligate.  In the first scene we meet the conniving Lady Sneerwell (Brenna Pritchard, left), who is adroitly planting gossip around town with the assistance of her conniving assistant Snake (Hayley Armstrong, right).

A dual intrigue develops. It involves, first, the foolish knight Sir Peter Teazle (Fay), married late in life to a country girl (Anjelica Jewell) who has fallen for the glamour of city ways, tattling, spending and flirting.

Secondly, acquainted with Teazle and Sneerwell’s gossips are two brothers, Joseph the hypocrite and Charles the wastrel, whom we see exposed when their long-distant benefactor Sir Oliver (Jonathan Blackwell) returns incognito from India. To assess their characters, he interviews them, separately, in assumed identities as an impoverished distant relative and as a moneylender willing to bid for family portraits, the last assets of the house.

Theatre historians report that the idea of a "scandalous college" of gossips had occurred to Sheridan five years earlier in connection with his own experiences in Bath:

“His difficulty was to find a story sufficiently dramatic in its incidents to form a subject for the machinations of the character-slayers. He seems to have tried more than one plot, and in the end to have desperately forced two separate conceptions together. The dialogue is so brilliant throughout, and the auction scene and the screen scene so effective, that the construction of the comedy meets with little criticism. . . . “

[from Encyclopedia Britanica, 1911, quoted at http://www.theatrehistory.com/irish/sheridan001.html]

The wit and brilliance of the dialogue are the attraction of the play but they are also the greatest challenge for the actors. Irretrievably set in the raillery of the London salon, the play gives every character the same arch phrasing, elaborate sententiousness, and wit – as one 19th century commentator noted, “Their wit is Sheridan's wit, which is very good wit indeed; but it is Sheridan's own, and not Sir Peter Teazle's, or Backbite's, or Careless's, or Lady Sneerwell's.”

So how do young 21st century actors handle this beautifully archaic mode of expression? The cast is, after all, dealing not only with the sense of the text but also seeking to emulate the orotund sing-song of upper-class British speech -- while delivering lines with appropriate comic timing.

Director McCann’s choice to set the play in the 1920s helps somewhat, and some speak their words very well, ‘fore God.

The two women in the image above, Brenna Pritchard and Hayley Armstrong, combine eloquence of speech with apposite appearance. Pritchard, also a talented song-writer, has an animated valentine-shaped face framed with a flapper’s short bob. Armstrong, with ingenious expression and mime, slithers herself into an entirely convincing snakey malevolence.

Another standout is young Alexander Slay-Tamkin, who out-Fauntleroys Little Lord Fauntleroy. The diminutive Slay-Tamkin confidently plays the fop, and his presence and diction are as remarkable as his plaid stockings and gold kerchief.

Anjelica Jewell as Lady Teazle is bubbly and wide-eyed, as befits a rapidly urbanizing lass, and she is particularly affecting in her duo scenes with old Sir Peter (Fay), both early, when she teases him, and later, after she is discovered by her husband to be hiding in Joseph Surface’s quarters. Joseph (Wyndham Shortt) offers a mendacious explanation; with her long, deliberate pause before admantly contradicting him, Jewell shows that she and director McCann know how to ride the audience’s expectations.

Kristen Crane as Rowley, steward to Sir Peter, is assured and not in the least intimidated by a role originally written for a man. The rival brothers – Shortt as the sanctimonious Joseph and Romeo Joy as Charles the n’er-do-well – are cast to type and deliver their characters clearly.

Jonathan Blackwell as Sir Oliver has fun fooling his nephews in the characters of the fey moneylender Premium and the doddering relative Stanley. He plays them broadly, but no one seemed to mind that!

Vortex staff and cast deal with the challenges of multiple locales by simply announcing them away – no change of furnishings was required, because actors promenading through the playing space announced the change of locale and the attendant maid and butler scrolled up a different portrait in the frame at stage left.

At the curtain call the cast surprised the enthusiastically applauding audience by plopping themselves down on the set. Members Chance Parmley and Anissa L. McVea stepped forward for a brief, humorous appeal for support for the Vortex summer program (“For this program, which is tuition-free, we’ll take your cash, your car, your house, your children – and put them all to good use for the theatre.”)

Smiling, these two stationed themselves with a fishbowl at the exit of the theatre.

I couldn’t resist. I gave them my thanks and dropped in a double sawbuck.