The Red Dragon Players at Austin High School consistently perform at levels considerably above those of their peers, a fact confirmed once again last year when their Over The Tavern was judged the winner among the one-act plays presented by the largest high schools in Texas.

There's some good fortune and serendipity involved  there, as well as healthy geographic/demographic input, but a good deal of the credit must go to Billy Dragoo, head of the theatre department. In addition to his coaching and directing abilities, the man has a real teacher's touch in selecting the scripts for his talented young troupe.  No "smiley-face" plays here or predictable standards.  In the past couple of years I've attended Alan Ayckborne's Season's Greetings, Jane Martin's Talking With, Caryl Churchill's Mad Forest and Tom Dudzik's Over The Tavern (ranked first of the 256 competing submissions from 5A high schools in Texas).  And get this, since it's now official: Austin High School will be presenting the pilot production of a 'School Edition' of Spring Awakening, this coming December 8-12.

Lilllian Groag's The Magic Fire fits nicely on that shelf of challenging, instructive playscripts.  This play was first produced in 1997 at the Oregon Shakespeare Festival, with the support of a grant from a Kennedy Center New Play Fund.  It's the drama of a family of Austrian and Italian immigrants to Argentina, set in the times of Peronist fascism.  In the first act one gets to hear the solemn radio announcement of the death of Eva Perón.

The work takes the form of a memory play in which the narrator, Lise Berg, recounts her recollections of a childhood of that period.  It's not clear whether it's really autobiographical. The narrator reveals at the end that she went away to study in the United States after the tense events of the play and the family's permitted emigration to Uruguay. Biographical information about the playwright is relatively limited on-line.  Google lists a couple of titles of dramatic analysis written by her in French, resident in the libraries at Lake Forest College (1968) and Northwestern University (1975). After a period as a successful actress and playwright, she became a busy director of classic theatre pieces and drama. There's even a YouTube video of her talking about a 2011 production in Virginia of Orfeo.

So Katie Berlin in the role of Lise Berg may be exploring a largely fictional autobiography.  She learns only now, with us, of unsuspected events affecting the dozen or so individuals of the Berg-Guarneri family circle.  She steps in and out of the events, sometimes observing, sometimes interacting with her own younger self played by Kat Mateja, sometimes replacing her younger self.  The hard lesson with which she comes away from this theatrical bending of realities is that nostalgia cannot be trusted; it's a fiction made of half truths, grown-up pretense and the innocent presumptions of youth.

The diversity and eccentricity of this family group is such that it would merit a novel. That, in effect, is what Groag establishes for us with the lively back and forth within the music-loving, opera-loving large family as they cocoon more and more into their big apartment. Fortunate in their pre-war and wartime escapes from Europe, they've landed in a country where the same political forces are at work. Because a high-ranking Argentine military officer living in the same apartment house has informally adopted them, with a special affection for the naive Lise, they live within a protected circle. The 'Magic Fire' reference is from Wagner's Die Walkure, in which the sleeping Brunnhilde is protected by a ring of fire that only a genuine hero can cross.

Will Shaw as the family's protector General Henri Fontannes has a controlled watchfulness. We see him at first in civilian clothes; when he appears in uniform, braid and white gloves, he is almost apologetic to the Bergs. Within the family circle Lise's parents are her worried mother Amalia (Aubrey Elenz) and her nervous musician father Otto (Jackson Minton).  Minton displays a nervous tic -- the tendency to shut his eyes or look upward at moments in the dialogue -- that may be actor's nerves; in any case, it fits the personality of a man who feels threatened by a militarized society ready to assume guilt by association. The family includes an angry old nonna (Ria Agarwal) who has never forgiven her now-dead husband for 'kidnapping' her and taking her away from her native Italy; a breathily emphatic actress Elena (Maggie Miller) who has had no work since the political authorities took control of the National Theatre; and sharp-tongued Aunt Paula (Catherine Schwartz), well on her way to spinsterhood and not in the least satisfied with that or with her world in general.  The males both related and attendant are equally vivid.

The Magic Fire covers ground that has been covered elsewhere -- in many a play or film about life in wartime Europe, for example -- and it does so with a rewarding wealth of character and detail. One teaching point to remember here is that  the ideology of fascism -- the obligation to obey the authorities of the state -- prevailed even among individuals who were otherwise highly cultured and apparently humanitarian. Even the healthy, quirky innocence of a family like the Berg-Guarneris was no shield.  Lise rediscovers those lessons and recounts them to us. The question unanswered in that title metaphor is whether that next-door regime-supporting general was the genuine hero, or whether the escape of our Lise was due to chance, opportunity and later personal pluck.

Click to view excerpts from the program for The Magic Fire by Lillian Groag. 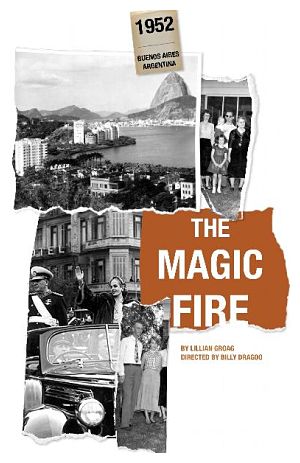