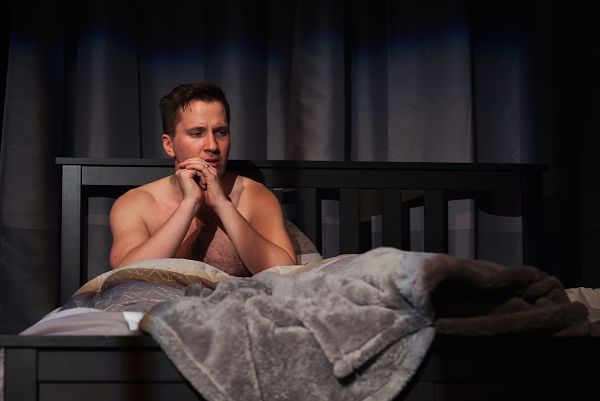 The Last Five Years is the story of a relationship that proceeds through attraction, dating, marriage and beyond, all in the span of less than two hours in stage time and five years in narrative time. The elapsed time is unimportant to the relationship and the production. The show seems like about thirty minutes and gone too soon. Attribute this to the deft and efficient direction of Michael McKelvey, surefooted and fresh from numerous successes in Austin in recent years despite his relocation to Pittsburgh. Most notable among them was last summer’s award-winning Silence! The Musical at Salvage Vanguard Theatre.

The Last Five Years falls into the rock-solid category of boy-meets-girl-then-life-happens.  The expectation of bathos and boredom at sitting through another tritely earnest contemporary fairy tale is banished quickly by exceptional live music and talented, powerful singing by the two singers David Gallagher and Sara Burke. There’s no need of amplification. 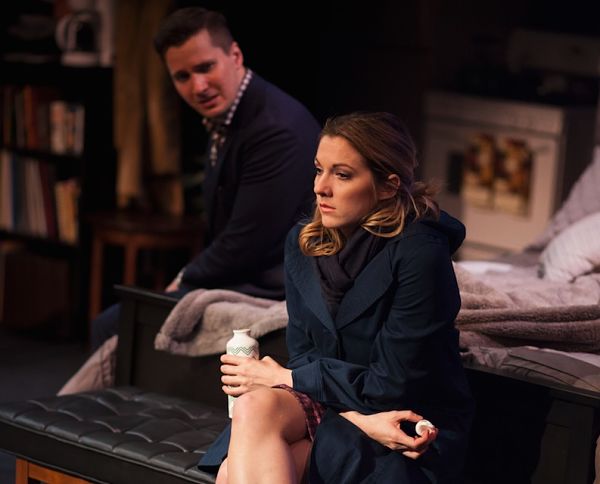 And this is probably by design: the demands of the plot are so light that they can be ignored in favor of our full enjoyment of the music. This is why people go to musicals anyway. Credit  goes to Rob Greenfield on piano and Leigh Mahoney on violin for playing the music live with the singers.

Jason Robert Brown’s musical is an award-winner with legs, as they say. This revival of Penfold’s 2009 production plays at the Trinity Street Theatre weekends until April 12.  This repeat production is part of the ongoing collaboration between Penfold and McKelvey.

The plot has a kind of mirror symmetry. The protagonists’ separate lives come together at a focus of marriage and then gradually seek increasingly divergent paths. We know this from the beginning with the singing of the good-bye note. David Gallagher as Jamie and Sara Burke as Cathy sing the story of their relationship almost entirely in flashbacks of memories of pivotal events, those experience everyone cherishes until the ends of their days.

And here lies the brilliance of the lyrics by Jason Robert Brown. The milestones of attraction, love, and loss are common to all; that’s why we love this theme, from Romeo and Juliet until today. And while the cultural straits of young lovers who are talented, ambitious Manhattan residents have become almost cliché in current Broadway show writing, The Last Five Years reaches beyond itself brilliantly to touch almost everyone who has known romantic love.

The generalizing quality of the production is symbolized best by the photograph cover of the program.  The image is a near-close-up of a couple dancing closely on a darkened dance floor. The man’s head is seen from behind, and it is tipped toward the woman’s deeply obscured face. They are so close yet so impersonal as seen by the viewer. He is Everyman; she is Everywoman. The credit here goes to photographer and graphic designer Kimberley Mead. The man is indeed Gallagher; the woman is Annika Johansson in the 2009 production. 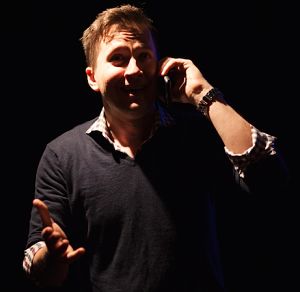 The measure of a theater to many is how well it supports musicals. In this regard Trinity Street Theatre measures up very well. The singers weren’t miked nor were there apparent pick-up microphones in the lighting grid above the stage. Yet the sound was near-perfect.  Last August he relatively new Trinity Street Theatre hosted a co-production with the Austin Jewish Repertory Theatre of Fiddler on the Roof. It should be encouraged by all to host many more musical productions in this inviting space. This facility and the even newer Ground Floor Theatre on the east side may create the critical mass of available musical-friendly spaces for an explosion of musical theatre in Austin.

David Gallagher is a dynamic singer who leaps around the stage with abandon. He doesn’t quite attain the behavioral inflections, however, of a Jewish writer stud in love with a Gentile dancer and actress, so well embodied by singer Sara Burke. 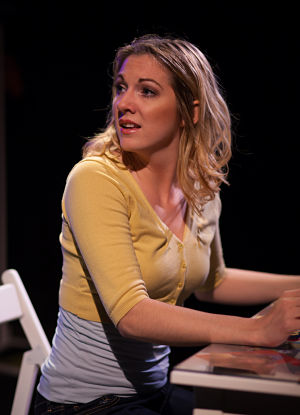 Small matter — of greater import is the imbalance in the singing material. Gallagher’s songs drew applause while Burke’s songs, presented superbly, stimulated thoughtful reflection. Even so, Burke brought down the house in one line in a song declaiming the woes of auditioners. No spoiler here; you’ll have to go to the show and wait for it.

Austin audiences have reason to hope that the Penfold-McKelvey collaboration will persists through many more productions.

For more information, email us at info@penfoldtheatre.org or dial (512) 850-4849. Box office hours are 8am to 5pm Monday through Friday. On performance days, we are also available by phone from 1pm to 5pm on Saturdays and Sundays and the hour before each performance.