Review: The King and I by Zach Theatre
by Michael Meigs

The first and probably unnecessary point to make is that this opulent evening is not the place to go for authenticity.  The Zach Theatre has of course gone to great lengths to provide us with an Asian experience, and it's an enchanting one.  It's not a historic document, however, and The King and I on the stage at the Topfer Theatre is really a fantasy about the guardedly cordial meeting of East and West.

Freely adapted from Margaret Landon's fictionalized biography of Anna Loewin, English governess of the family of the King of Siam (modern Thaland) in the 1860's, this Rodgers and Hammerstein classic is probably as far from reality as Disneyland or the Land of Oz.  The 1951 musical was the basis for the 1956 film that resulted in an Academy Award for Yul Brynner in the role of the King of Siam. With the film and some 4500 performances of the musical Brynner stamped himself into American popular memory. 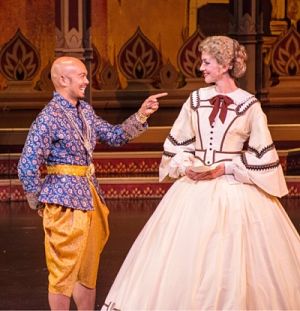 Now, 73 years after the Broadway premiere and 68 years after the film, this senior piece of stagecraft gives us an unexpected look into the hearts and minds of an immediately post-WWII America.  Eight years earlier Rodgers and Hammerstein had given the country Oklahoma!, a celebration of the besieged homeland; with The King and I they served up an acceptably romanticized version of the mysterious Far East, newly present in the popular mind.  Set almost a hundred years earlier, the book of this musical portrays an impossible courtship between East and West, between a worshipped feudal king and a widowed, thoroughly practical and good-hearted schoolteacher.  Much of the memorable music is irretrievably mid-century American. "I Whistle A Happy Tune," "Hello, Young Lovers," "Getting to Know You" and "Shall We Dance?" could easily have fit into the farm- and ranch-lands of Oklahoma.

Exoticism of location is also exoricised somewhat by the use of English throughout.  For example, Rommel Sulit appears as Kralahome the autocratic chamberlain to the King, barking orders in a foreign tongue, presumably Thai, but he moves into the governess's tongue fairly promptly.  An indication of his own sophistication, perhaps; and the King (Mel Sagrado Maghuyop), while fumbling theatrically from time to time for the right expression, is just as fluent.

Less explicable is the fact that Tuptin (Yoonjeong Seong), tributary gift from the King of Burma, and her escort Lun Tha (Jason Yao), communicate entirely in English. Quibbles these are, perhaps, but clues to the intentions of the authors: this pair of secret lovers become renegades to remote Asian tradition. They are presented as figures as tragic as Tristan and Isolde, the protagonists of that most Western of romantic legends.

Faced with all this puzzlement, the King eventually proves incapable of dealing with conflicts of duty, divinity and undeclared love. He immediately begins to pine and decline, providing the audience with the satisfaction of a noble deathbed scene and the accession of a Crown Prince (Michael Wheeler) more amenable to Western ways. 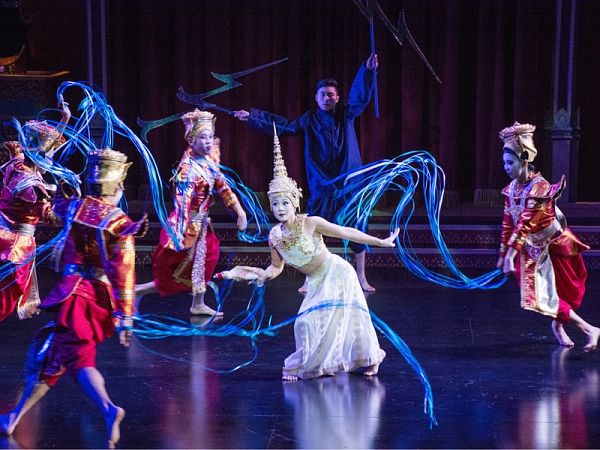 Granted those fantasies, however, this production directed by Abe Reybold holds delights that overcome -- in fact, overwhelm -- the essential provincialism of its plot.  Scenic design by Kenneth Roy is fabulous, from the looming Thai-style front scrim to the sailing ship to the evolutions of the royal palace, including no fewer than three towering Buddha statues.  The Asian-influenced ballet interludes introducing the court in Act I and retelling the story of 'The Cabin of Uncle Tom' in Act II are vividly, wonderfully choreographed by Yuki Ozeki and Greg Zane.  Neither piece really advances the central plot, but taken together they're worth more than the price of admission, whatever you might have paid for your seat in the Topfer.

Jill Blackwood is pert, attractive and quite proper in her very English insistence on rules and reciprocal behavior.  June Julian as senior wife Lady Thiang is a pleasure to watch and a delight to listen to. Maghuyop as the King is droll, confident and eventually desperately fierce-- at home in a role that he has played in two previous productions. Yoonjeong Seong as the Isolde figure Lady Tiptup outdoes that, listing in her program bio eight productions of The King and I. 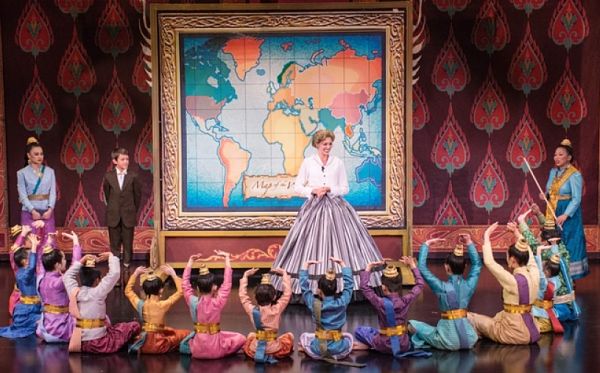 Calculated to melt your hearts, the crowd of Siamese children helps lend warmth to the proceedings. There are two casts of them, each as diverse as the other and including faces that are identifiably Vietnamese or Korean.  Siam in 1860 was no Asian melting pot, but it's a satisfaction to see this suggestion that the United States today is just that.

The King and I
by Rodgers and Hammerstein
Zach Theatre