Connor Hopkins' The Jungle is a deeply serious work using high craft to dramatize the worst days of American industry.

Upton Sinclair's 1906 piece, first published in serialization and then as a novel, caused a tremendous stir. He tells the story of an penniless immigrant family, crushed by corrupt exploitation, indifference, and unsanitary conditions of the Chicago meat packing industry. Sinclair's ambition had been to shake the American public into awareness of the inhumanity to the workers practiced by management and by capitalists -- an aim mirrored in Trouble Puppet's tag from the work, "They were slaughtering men there, as surely as we were slaughtering animals."

The Jungle was assigned reading in my high school American history class, long ago. I recall skimming impatiently through the early pages and then feeling gathering horror at the explicit depictions of animal slaughter and of brutalism I could never have imagined. The reading public shared those sentiments a hundred years ago, rousing political pressures that eventually led to Federal investigations, legislation, inspection and the founding of the agency that was eventually to become the U.S. Food and Drug administration.

Sinclair sought to strike for social justice and against wage slavery. He was deeply disappointed in the outcome and is quoted as saying bitterly, "I aimed at the public's heart, and by accident I hit it in the stomach."

Hopkins' version of The Jungle is aimed equally at the heart, and the abstraction of puppetry escapes the filth and blood that obsessed the initial public. Yes, the old floor sweeper dying of tuberculosis hacks interminably into the open case of packed beef. When the processing line stops because of an accident, one worker desperately afraid of losing his job strikes down another and hides the unconscious body inside a packing case with the beef. 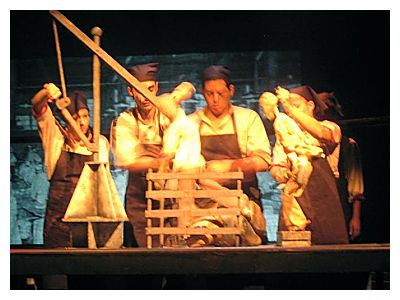 And central to the story is the rite of slaughter that takes place at center stage, a repeated dance of death. A bellowing cow enters the pen; the puppet worker on the right strikes the animal on the head with a sledge hammer; the puppet worker on the left leaps into the corral, straddles the beast with his back to us and hooks its hindquarters to a hoist; he leaps out again and the hoist raises the dangling animal cadaver and swings it away. The cycle repeats. It's a haunting image and an intimidating act of virtuoso puppetry, and it comes again and again throughout this piece. 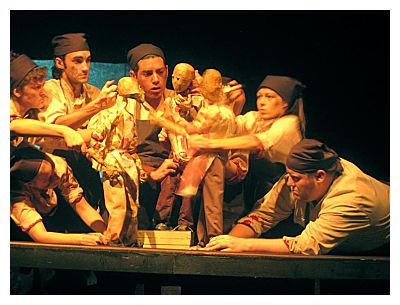 The action of The Jungle occupies the entire stage. Eight puppeteers appear in this production. They are blank-faced, apparently emotionless, dressed in smocks and head cloths like those of factory workers. They work the puppets, who are jointed dolls about two feet tall, each with metal grips at the head and the elbows. Each puppet figure owns two of these handlers, and sometimes three. The story is told in deft, convincing movement, so closely coordinated among the puppeteers that they appear to be extensions of their own puppetmaster. The puppeteers give voice to the figures, or pant for them, or cough for them, but they say nothing otherwise.

The exception is Zeb West, the bowler-hatted factory foreman. West is harsh, dismissive, derisive and lecherous. He owns the workers. All of them. Puppets and puppeteers alike get the same treatment. West snarls and dismisses the men for the slightest delay. West's hot whisper in the ear of a woman puppeteer serves double for his hot grope of a woman puppet on the canning line.

In the midst of this degradation we witness moments of family and community. A courtship; a wedding; a funeral; a wake. Hopkins provides haunting shadow puppetry in the background to emphasize the trips to the cemetery, but most of the time the projected images are of grim factory walls or stockyard images.

Sinclair's novel made a hero of the labor union spokesman. Hopkins makes the union organizer ineffective and has the story's dogged hero Jurgis Rudkos scorn him, at least through much of the story. Unlike the novel, the puppeted Jungle offers never a glimmer of hope, either for Jurgis or for his offspring -- the final scene before the blackout returns to the slaughter corral in an expressionistic, vengeful tableau.

The story is elegantly told but it's a relentless downer and a curious piece of sociology.

In program notes Hopkins says, "The concerns of Sinclair's Jungle remain timely and compelling today; a century after the novel was published, America is still struggling with issues of food quality, industrialized farming and slaughter, immigration and labor, and social justice."

That seems a stretch, designed to cover the fact that Trouble Puppet's The Jungle is an anachronism, a direct throwback to agitprop theatre of the 1920s and 1930s. We're invited to hate the man in the bowler hat and the system that produced him, and this story is one of no hope, no hope at all. It's an artefact and as told here has very little to do with America today.

It's a beautiful piece of work, but Trouble Puppet's The Jungle is hollow at its heart.

Review by Robert Faires in the Austin Chronicle, October 1 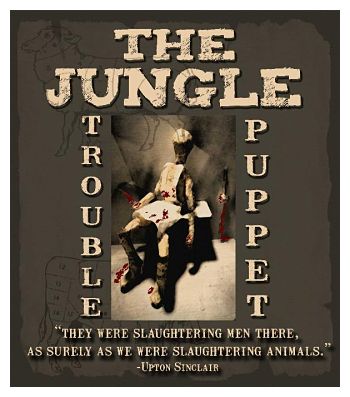