The very venue is a dream catcher.  This tidy wood-frame two-story house is situated on Garden Street -- hence its bed & breakfast title The Eponymous Garden -- and it's saturated with atmosphere.  Owner Sterling Price-McKinney has written scripts for performance here in connection with the Salvage Vanguard Theatre, and this is the location for the SVT's annual fundraiser.

This isn't the Austin of of the politicians and high rollers who used the Driskill Hotel just off Congress Avenue; it's the Willow-Spence historical district, built by respectable middle-class folk in the 1920's and 1930's, a time when that neighborhood south of First Street and a bit further east from East Avenue (now I-35) was a cordial middle-class community leafy with oaks and pecan trees. You sense that whole lives were lived here in simplicity and virtue.

The Bottle Alley Theatre Company was pleased to be granted the use of this B&B, and they willingly scheduled their performances of Chris Fontanes' The Ivy House on Mondays and Tuesdays, weeknights usually just as idle for theatrical performance as they are for quaint but well-situated little inns.

The cozy spaces of the ground floor don't permit much of a crowd.  The company limits attendance to between 12 and 15 spectators each evening.  With an acting company of 7, that's theatre up close and personal, and unless you're already an intimate of at least one of the actors, you won't know which of those present will be presenting the connected stories.

The monologues, dialogues and action shift from sitting room to bedroom to stairway to kitchen-dining room and even out to the rear porch.  Playwright-director Fontanes lingers nearby and from time to time may direct your attention with a helpful gesture.  At times the intimacy of the setting undercut the actors' craft, leading them to deliver lines with a quietness more appropriate to controlled video production than to a situation where a dispersed and moving audience had to be attracted and informed.

While I was reflecting on the experience of that evening at the Eponymous Garden, it occurred to me that I regretted the decision several years ago of the Austin Circle of Theatres to adjudge itself a greater mandate and redub itself The Austin Creative Alliance.  I've now followed dramatic art in this town for a full five years, and it has become more and more evident to me that the metaphor of the circle is the appropriate one for much of Austin's mimetic art.  When we create theatre, we are talking to one another about who we are, what we feel, and what we consider to be important.  We gather a circle of artists, often close friends, and we gather an audience around their performance.   In his 2008 meditation, UT professor of philosophy Paul Woodruff captured the process and reflected its importance in the book's title: The Necessity of Theatre (Oxford University Press).

The admittedly self-assigned mission of AustinLiveTheatre.com is to bring those circles to light and to encourage both artists and audiences to join them.  To some extent this effort to publicize and market live narrative theatre runs in countercurrent to what's actually going on.  Theatre makers usually aren't intentionally excusive, particularly when it comes to audience.   But very often they're content just to post an event on Facebook, for they know that their circle of friends and supporters will respond.

The Bottle Alley Theatre Company, with a core membership of recent graduates from UT Corpus Christi, fits this pattern.  Fontanes was quick to extend a hand to AustinLiveTheatre soon after they organized last year.  Theirs is a boot-strapping effort, just like those of many another budding company of artists.  Their first two productions were done at The Broken Neck, a ramshackle venue much farther east, more often used for neighborhood rock sessions. That's where I attended Stage, their first presentation, also written by Fontanes.

The audition notice for this show stated that it was "somewhat hard to describe."  I edited that comment out, and seeing the production confirmed my initial reaction.  It's hard to summarize or outline, perhaps, but not, I think, too difficult to describe.  The Ivy House is about yearning, and particularly about the quiet, moody search of young adults for life partners.

Fontanes' several stories are revealed to us as the actors step forth from the crowd.  Tim Olivares begins and ends the work with quiet soliloquies on the leather couch in the living room, and Kimberley Gifford, seated opposite him, establishes the core relationship of Painter and Gwendolyn as they enact their awkward first meeting in a coffeeshop while still students.  Kate Jones steps in as Zoe the sharply energetic waitress, visibly resentful of them.  Zoe will soon be dialoguing with the Steven Cruiser as Noah, her gentle, hovering companion.  We'll meet the delicate Erin (Rachael Shaw) and the spiritually hungry Shine (Ariel Gillman).  In the ground-floor bedroom we'll attend delicately staged encounters -- an extended relationship shading into frustration and a couple of infidelities.  Painter's friend Dante (Taylor H. Whitmire) is unapologetic about seduction but avoids confessing it to his buddy, perhaps making a bad situation that much worse.

Standouts in the cast were Kate Jones as Zoe the deceptively no-nonsense waitress/artist longing to leave for New York City and Gifford in the principal role as the unattainable love interest Gwendolyn, who joined the ensemble at a relatively late date in the process.

Memoryspeak by these characters informs us of a pregnancy, an accident that was really a suicide, a fierce breakup and abandonment and a despairing effort to reach beyond the grave.  Emotions and relationships are discussed on the stairs, on cell phones, at the kitchen table, on the back porch and on the floor of the kitchen by characters consuming junk food and spooning ice cream from the container.  Desire, hurt, uncertainty and yearning -- above all, yearning -- are palpable.

Playwright Fontanes connects these stories deftly and reserves a couple of surprises for us. The fiction ebbed away with Olivares' final soliloquy on the living room couch, a tidy bookend for the performance, but we waited in suspense to see if more was to come.  The formal apparition of the cast for closing bows confirmed that the narrative was at at end.  We applauded their valor and portrayals; they disappeared from the living room.  An instant of silence ensued, followed by a burst of discussion in the circle of audience members.  They'd clearly had been touched and moved.  The actors joined us, constituting an additional modulation of the circle.

For the Sunday evening invited preview on February  24 there was an audience of thirteen. Everyone but me appeared to be in their twenties.  It mattered little, for that evening's performance brought back feelings, misgivings and yearnings for all of us.  Call it time travel; call it empathy or voyeurism; call it what you will, but Bottle Alley Theatre Company's art spoke to me just as it spoke to everyone else in the room.

The Austin circle has pretty much closed on this production. The only remaining performances here are scheduled for Monday, March 4 and Tuesday, March 5.  Bottle Alley takes these memories on the road at the end of the week in Tyler, Texas, with Theatre 20 at Potter's Place, 719 W. Front Street, Friday the 7th and Saturday the 8th. 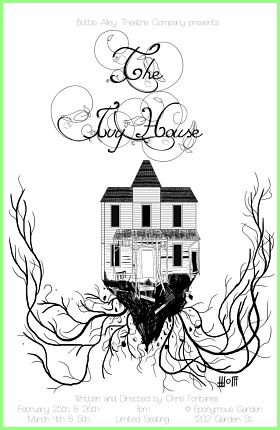