Review: The Island of Dr. Moreau by FronteraFest
by Michael Meigs

Vigorous, brash, opinionated and witty, Charles P. Stites would be an entertainment all by himself if you had regular access to him.  He posts frequently on Facebook, celebrating books, poems, actors, artists, authors, incidents of daily life, Half Price Books,  his favorite coffeeshop and family and friends.

Actor and director, he has appeared on Austin stages (most recently in La Bute's Fat Pig and in Shakespeare's Coriolanus but earlier for City Theatre as Tartuffe and as the odious Ricky Roma in Mamet's Glen Garry Glen Ross).  In scarcely disguised incoporation as Paladin Theatre Company he produced memorable ensemble pieces (Kava's Early Girl with an all-female cast and Mamet's Sexual Perversity in Chicago). Two years ago he appeared in Lee Blessing's Chesapeake, a 'monodrama' in which Stites delivered the entire shaggy-dog narrative and all characters.  I'm not in the least abashed to quote my characterisation of that performance as "the most gripping act of theatre imagination I've ever seen in Austin."

We've had to wait for The Island of Dr. Moreau, also a monodrama.  Stites had put it on his program for 2013 but let it drop out of sight.  He continued work on script and presentation and locked in four performances for the 2014 FronteraFest.  I was busy trying to attend all of the locally produced Long Fringe pieces (plus others), but I wasn't about to miss Stites doing H.G. Wells.  I caught his final performance last Sunday.

Charlie's Island was quite a topper to a very rich buffet of FronteraFest theatre.  The same assurance was there: word-perfect on his script, he transformed instantly from one character to another, endowed each with distinctive voice and accent, and radiated intensity.  I felt the same eerie lift that had taken me during Chesapeake, one that goes beyond ordinary mimesis and approaches a hypnotic concentration.  In the week that I've had to reflect on the experience, I've found only one metaphor for what the man is capable of doing in this format: the very experience of reading a vivid, sharply drawn work of fiction.  The sort that takes you through the page, through the code of print and language, into some place immediate, foreign and intimate all at the same time.

Charlie Stites' talent makes me think of the self-exiles in Bradbury's Farenheit 451, refugees from a world where books were banned.  Each one memorized a book, guarding that precious world within, in obstinate conviction that once controlled and sterile society disintegrated, knowledge and imagination could be regenerated.

He acknowledges right up front that he has freely adapted Wells' 1896 novel.  Moving any novel into the monodrama format requires extensive refocusing, of course.  Stites retains the overall thrust of the British writer's story.  At the same time he adds themes and incident that make that dark adventure tale even more harrowing and cast an intriguing additional layer over it.

You may have read the novella.  It's not as well known as The Time Machine, but its theme of the Faustian temptations of science, while 19th-century crude in concept, touches upon concerns that worry the popular imagination still.  The narrator is shipwrecked and eventually cast up on an isolated Pacific island where Dr. Moreau has been applying surgical techniques and neurological manipulation to give animals quasi-human shape and understanding.  Moreau the creator has produced remarkable results and a population of almost-humans living in the jungle.  Along with his reluctant and often drunken physician assistant Montgomery, a decadent escapee from New Orleans, Moreau struggles to maintain human dominance over the increasingly wilding populataion of created beings.

Wells wrote in part to decry the practice of vivisection, held in horror by eminent Victorians but practiced by contemporary scientists.  That word never appears in Stites' presentation, perhaps because of its quaint ring, but our own society has an equally queasy feeling, widely expressed in opposition to animal testing, fur coats, eating meat, and shelters that kill unwanted animals.  Our society is of a divided mind about what's unhuman and what's inhumane.

On that level, the anger and resistance of the converted animals makes an exciting, fast-moving story.  Their rebellion is of course inevitable, and our narrator is caught in the middle of it.  Stites' account of doings in Moreau's surgical lab and of the tense confrontations between Master and dominated are drawn with  razor-sharp imagination and detail.

Equally intriguing is the adapter's account of the inhumanity of men subjected to extremes of isolation and stress.  Roughly the first quarter of his story is his own invented account of three men in a lifeboat on the open sea, somewhat similar to Stephen Crane's story The Open Boat.  Here, however, the three men had scrambled to abandon the sinking ship, leaving others behind; over their eight-day ordeal they run out of water and out of hope, sinking eventually to the animal level of incipient cannibalism.  Human identity and morality are put under tremendous stress, and blood thirst is both actual and symbolic.

Religion, or at least moral behavior derived from religion, is an additional theme, stronger in Stites' vigorously pruned version than in the book.  Wells made The Law a central element in the story, showing the animal-men subservient to Moreau's law and its representative.  That theme is prominent here; but well toward the end of the performance, amidst disorder, Stites lets it slip, almost casually, that our narrator is a priest.  That bit of information explains the man's torment at the zero-sum end game in the open boat.  Once the man becomes the captive of the grotesquely reshaped creatures, he finds that his rosary has disappeared into the hands of one of them that intends to use it to impose his own dominance over fellow creatures.

And Stites cuts our mad scientist some slack, quite unexpectedly.  Wells's Moreau dies in the jungle, ignobly; Stites's Moreau is stern but distant throughout, but when the animal-men are about to tear him and Montgomery to pieces, he shouts untruths that motivate them to spare the narrator's life.  It's a most Christian deception.

Those overtones of Christian morality prompted me to look more closely at Wells' own religious philosophy. I had vaguely recalled that in his Short History of the World (1920) the British sceptic had scandalized contemporaries by denying the divinity of Jesus. Was Stites distorting the British author's aggressively speculative pro-science, evolution-friendly messages?

Perhaps not.  Wells' history can be read online, and his brief chapter XXXVII, 'The Teaching of Jesus,' is introduced as follows:

Now it is on the whole more convenient to keep history and theology apart. A large proportion of the Christian world believes that Jesus was an incarnation of that God of all the Earth whom the Jews first recognized. The historian, if he is to remain historian, can neither accept nor deny that interpretation. Materially Jesus appeared in the likeness of a man, and it is as a man that the historian must deal with him.

Wells makes a good case that Jesus's teachings were indeed revolutionary, offering new comfort to the poor and oppressed and directly threatening elites and the status quo.

To me the Christian Christ seems not so much a humanised god as an incomprehensibly sinless being neither God nor man.  His sinlessness wears his incarnation like a fancy dress, all his white self unchanged.  He had no petty weaknesses.  Now the essential trouble of my life is its petty weaknesses.

Craufurd's analysis was that Wells, while rejecting tenets of the Anglican church, was really more of a Deist and a believer in the eventual perfectability of the human species.

The self-taught historian, futurist and science fiction fabulist was probably, more than anything else, an intellectual provocateur.  So, in his own way, is the eclectic and eloquent Charlie Stites. 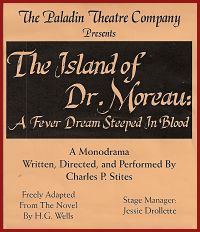