Review: The Illusionists - Live from Broadway by touring company
by Brian Paul Scipione

This exhilarating, dynamic and nearly flawless magical variety show from Broadway is both very easy and difficult to review. The difficult part is simple to explain: I want to gush about it and tell the reader everything I saw but I don’t want to give away any spoilers. And let’s face it, when you are talking about illusions with stunning conclusions everything is a spoiler.  The easy part, as you would expect from a professional touring production, is that the show is amazing from start to finish.

After a truly transformative evening at the Bass Concert Hall with more than two hours of show time, I left with the overwhelming feeling of a child’s wonder-filled joy. Through mere chance, a doll tossed blindly around the crowd found its way towards me, and the next thing I knew I was being whisked up towards the stage as a ‘volunteer’. Perhaps a nascent sense of nerves emanated from me as I stumbled past the legs and beverage cups. I made my way up the long row towards the aisle as voices of encouragement from my fellow audience members broke out all around me. One of the many reasons to love Austin: strangers cheering on strangers in a collective spirit of support and good times.

I got on the stage and felt the collective weight of the audience’s anticipation which was markedly overwhelmed by the debonair poise and prodigious self-assurance of the man who appeared by my side, Colin Cloud, the Deductionist. He was there to read my mind and that’s what he proceeded to do. 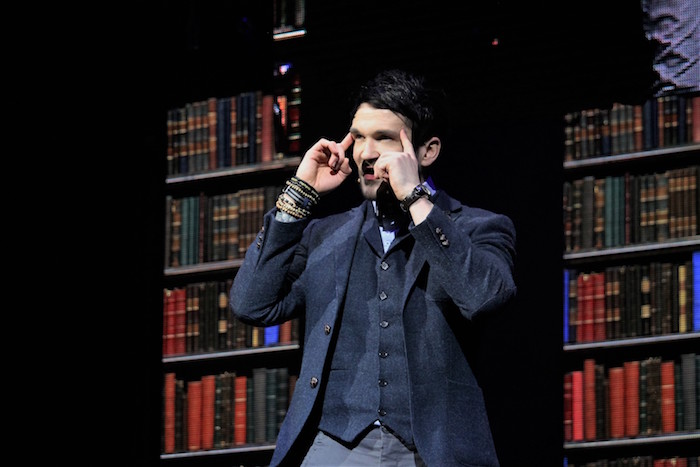 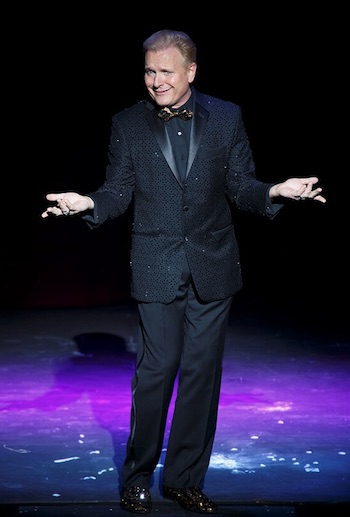 I was there, on the other hand, as an objective observer, a journalist. I can’t say how he did it because I just don’t know. I couldn’t have been any closer to the action. I circled my answer on the page, folded it up and handed it to the other volunteer from the audience and watched her toss the very same piece of paper (still folded up) into a blank space in the middle of stage. The Deductionist had never even touched the paper since giving it to me in its still blank form. I had been invited to look around for hidden cameras while I annotated on the paper the name of a friend.

I took advantage of my time on-stage to check out my surroundings: searching everywhere for hidden wires, trap doors, or elaborate equipment such as a deus ex machina. All I saw was a big empty stage scarred by the marking tape that indicates where the performers and crew would take their places in the course of the night. As much as it was an adrenal rush to be in the show for a moment, I was glad to go back to the relative safety of my seat

The Illusionists troupe includes a crowd of professional magicians who run the gamut of skills and family friendliness. Joining the Deductionist is Jeff Hobson as the Trickster.  Hobson does quite a bit of sleight of hand but concentrates on his role as emcee and bawdy joke teller. He dons a fantastic sparkling jacket and glitter-embossed shoes and delivers wry punchlines with an infectious enthusiasm that plays all the way to the back row of the giant hall. Ben Blaque is the Weapon Master and by all means a stunning force with the crossbow, performing a range of sharp shooting with sharp arrows.I especially appreciated the modern twist when he split an apple with an arrow resting on his own head. Much cooler than the dated approach of making the pretty assistant wear the apple and assume the risk. 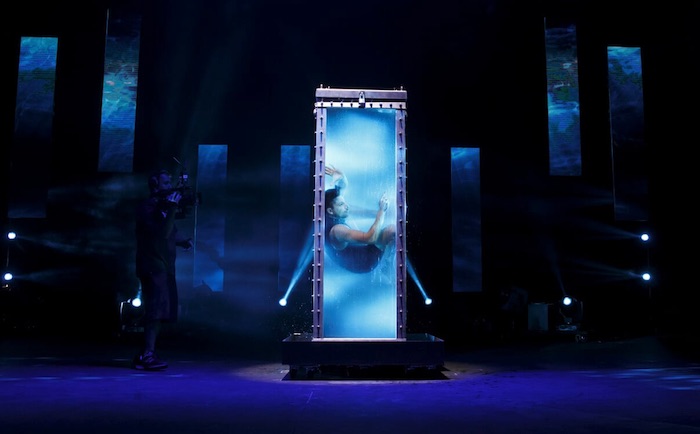 The Escapologist, Andrew Basso, performed what the Trickster assures us is the only non-illusion of the night.  He is chained up and plunged upside down in a pad locked glass tank of water. Using only a paper-clip and incredible concentration (not to mention lung capacity) he has only minutes to free himself.  Kevin James was delightful and affable in the role of the Inventor bringing a light-heartedness to the festivities.  Perhaps the most touching moment of the show is when he brings a little girl from the audience to help, not only make a regular piece of paper dance and jump, but later turn into a real rose before her eyes. Lending credence to this awesome trick is the fact that he performs it in the theater’s aisle and not on the broad stage. In another illusion, he saws a person in half as a nod to classic stage magic except in this modern version, the lower half of the body goes running off stage while the upper half lunges out and grabs an audience member by the arm causing her to unleash a scream that was very real indeed. 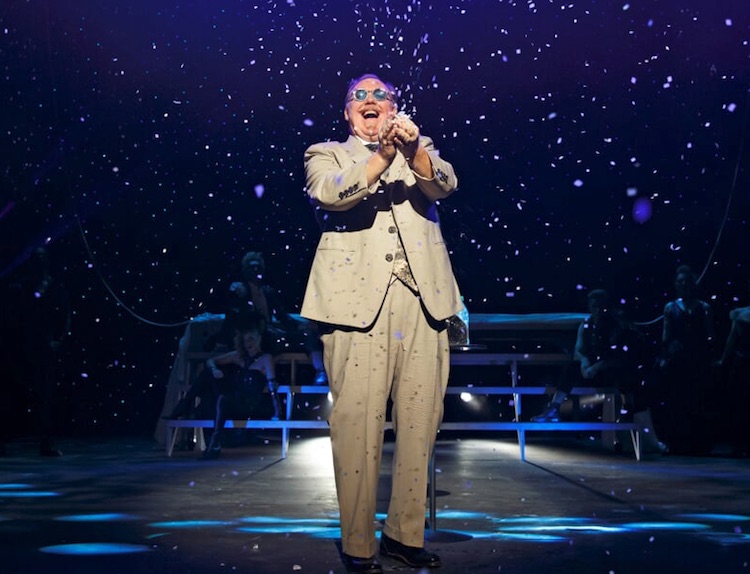 With his silent performance, slick suit and sly smile, Yu Ho-Jin as the Manipulator brought a distinct air of dignity and aplomb to the proceedings.  A master of making player cards, appear, disappear, change color, change face and fly through the air it is clear the concept of physics has never held much sway with him. The Bass Concert Hall featured a video screen that hung high above the stage allowing the audience to watch all the tricks up close. The screen also had the surprising benefit of allowing you to dart your eyes back and forth between the televised image and the actual performance in a personal game of “Am I seeing what I think I’m seeing?”

The final member of the cast Dan Sperry, the Anti-Conjuror, is definitely in an ilk of his own. His onstage persona was manic, aggressive, almost hostile even.  His illusion style is based on shock and gore as well as solid stage magic. His opening bit includes swallowing a Lifesaver candy and catching it in his throat. He then pierces his body with a strand of dental floss that he somehow manages to thread through the Lifesaver’s hole.  Finally, he pulls the Lifesaver straight out through the flesh of his neck. He interacts with the audience much more using a late-night style of comedy that may be border-line offensive to some but as a fan of the horror genre I enjoyed his stylings quite a bit. 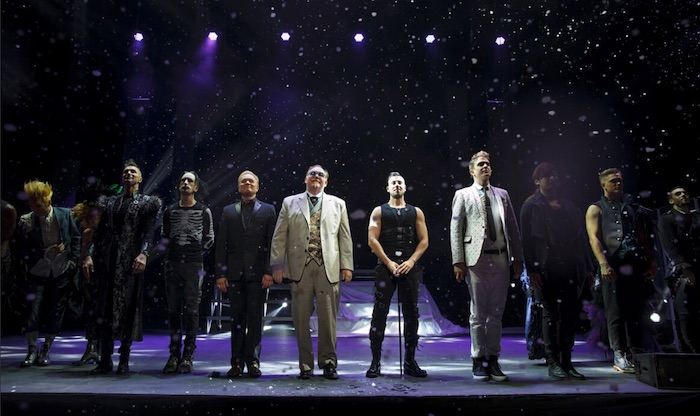 The Illusionists has a very short run here in Austin -- November 1-6 --so I encourage everyone to make ticket arrangements quickly.

The Illusionists - Live from Broadway
by ensemble
touring company

Click to go to ticketing page of Broadway in Austin 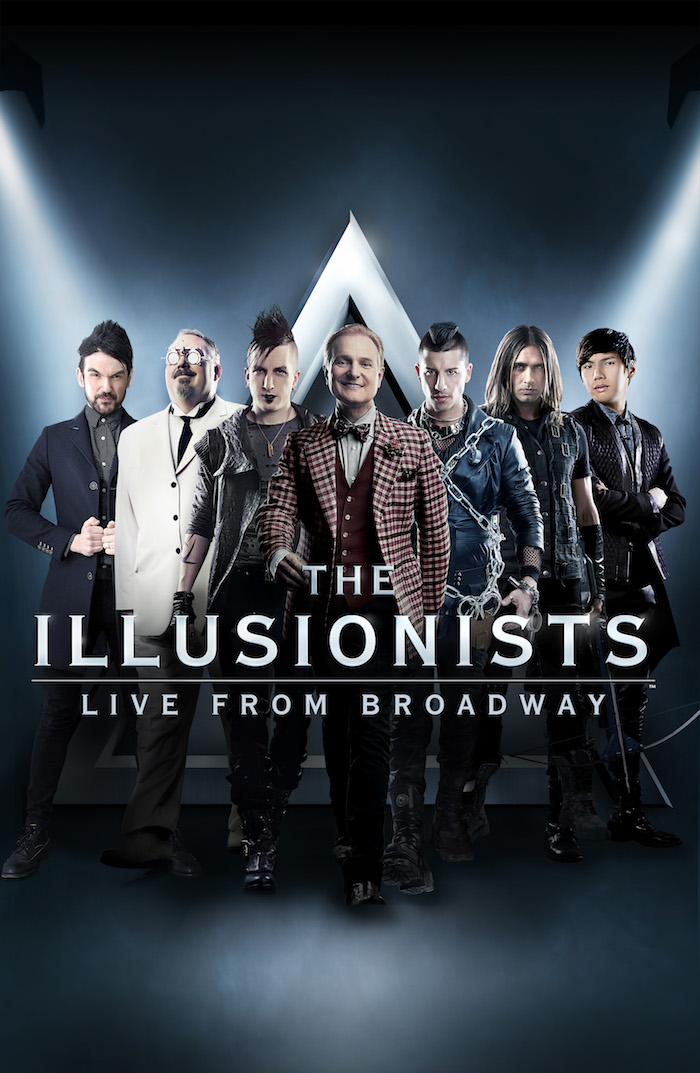