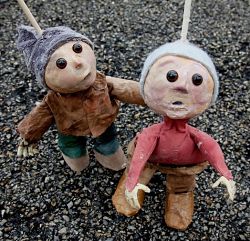 Trouble Puppet Theatre Company has stepped to the fore in current Austin theatre with its reprise of The Crapstall Street Boys. A shorter version of the concept played in 2012 in the Fronterafest Long Fringe festival. Lest anyone take a “been there, done that” attitude toward the new Crapstall, a reassurance: this fuller realization of the story is well worth a revisit.

The Crapstall Street Boys centers on the misfortunes of You Lad, who opens the story as he tries to go to school with his best friend Little Pig. They trail fearfully through garbage-mounded streets of a city beset by monsters. You Lad’s parents want an upgrade of their monster defense system, so they sell You Lad into factory work (slavery).

Much of the action from this point on concerns how the inherently clever You Lad gains survival tools at increasingly higher costs. A fairy tale scenario par excellence, it’s also Kafkaesque. The tale is dark and gets only darker, right to the end. It’s a modern allegory of corporate dominance, propagandistic mass marketing, and brutal labor relations. Cannibalism is featured, as is revenge.

In its inmost four-chambered heart, Connor Hopkins’ story asks the question: What is a monster? He offers several literal and metaphorical answers: brutal adults, playground bullies, killer factories, and steamrolling governments. The list may continue.

Hopkins’ sad and unhappy vision has a curiously seductive appeal. The puppets themselves are part of it. You Lad and other child puppets are round-headed with tiny, button-like eyes and costumes that can only be described as adorable. Some of the monster puppets are reminiscent of Maurice Sendak’s creations in Where the Wild Things Are.

The puppet show takes place on a large imaginative set, composed of tables on wheels with set pieces on them. Complete with puppet-scale streets, houses, and factories, the tables combine and recombine kaleidoscopically onstage, pushed into place by the crew of very capable black-robed puppeteers. The scale of this production is considerably greater than that of the earlier version. There’s much more story development in its middle industrial parts and in later, more monster-haunted sections.

The cast deserves applause for their split-second timing in motoring the table set pieces through scene changes; changes happened as though by magic, a quality difficult to achieve in this era of curtainless presentations. 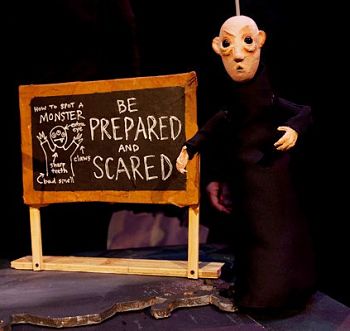 Puppeteers also gave full attention to the intricate details, delighting the audience with deft small touches: their wards shoveled coal into the furnace, ate from bowls, and threw a puppet brick through the air. Puppeteers animated tiny squeaking rats that become breakfast fodder.

Trouble Puppet fans know the company for its signature innovations in scale and frame-bending. The Crapstall Street Boys brims over with such things, and there are too many spoilers to discuss. See the show, list them, then post in the Comments below.

Trouble Puppet uses real-time video as a fully incorporated element of the story. Expanded from experimental use in the FronteraFest version, it’s vivid and effective: a Monster-cam gives the monster’s-eye-view during chases of the children around corners and through the labyrinthine streets of the city. Video news reports and ads appear periodically behind the action tables. This use of video gives the entire production a 3-D (perhaps 4-D or 5-D?) quality.

Rarely do designers of such strong multimedia work receive adequate credit. Trouble Puppet would like to have this feature noised abroad, and deservedly so. K. Eliot Haynes is credited in the program for media design, integration and sound design. Haynes’ impressive accomplishments were highly appreciated by all who saw the show.

Justin Sherburn’s music was also of exceptional quality. Sherburn composed it and was principal musician in the ensemble. Music and sound effects throughout the tale contributed strongly to its mood.

The fairy tale qualities of The Crapstall Street Boys are reminiscent of tales collected across the Teutonic world by early folklorists the brothers Grimm. The themes of many of the stories go back to medieval times, some probably even earlier. Many of the Grimm brothers’ transcribed grim stories dealt with mutilation, cannibalism and brutality. As often as not, family members were the wicked ones. Those dark themes were so predominant that the tales were not considered appropriate for children’s until the Grimms exercised much editorial judgment to gain wider audiences.

Not so here with The Crapstall Street Boys. Creator and master puppeteer Connor Hopkins gives his dark vision full, unrepentant play upon the SVT stage.

But why so, and why here?

Child psychologist Bruno Bettelheim, psychoanalyst of the Freudian school, wrote the classic study The Uses of Enchantment: The Meaning and Importance of Fairy Tales. Bettelheim proposed that old tales helped children release painful visions and imagery from nightmares and waking fantasies. To Bettelheim, allowing children to hear and read violent fairy tales assisted them in anticipating and dealing with their own adult futures.

Trouble Puppet’s adult fairy tale has the potential to rouse dark subterranean spiritual currents and misgivings in children and in adults alike. The story could be subtitled Back to the Fairy Tale Future.

The Crapstall Street Boys is not for everyone, but it’s still a spectacular artistic production. Discerning adults will appreciate it. And, what the hell, bring the kids if you want.

Trouble Puppet Theater Company is dedicated to the creation of exceptional works of puppet theater, to the promotion of the art of puppetry, and to the support of its practitioners ...