Review: The Clean House by Zach Theatre
by Michael Meigs

Everyone in the full house at the Whisenhunt Stage at the Zach Scott enjoyed this four-actor comedy by Sarah Ruhl, winner in 2006 of a MacArthur “genius” fellowship.

I was lucky to be able to see the show at all. As a newcomer to the Zach Scott, I had assumed that the reduced prices for Wednesday evening shows were intended to scrape up an audience – after all, almost none of the other companies in town function on Wednesdays.

When I showed up 35 minutes before the curtain, I found myself given a “standby pass” for my $15. I was number 14 in the line of hopefuls. We watched the mixed crowd file happily into the theatre ahead of us; at curtain time the house manager brought out ten tickets and passed them out. He spotted an additional seat during the wait; and then a single spot was left. The couple holding numbers 12 and 13 decided not to split their evening, so I arrived as the final bottom to fill a seat, still not knowing what to expect. 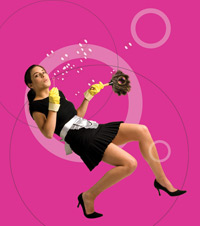 The show started with a lithe young Brazilian woman telling a joke – in Portuguese. A super-title helpfully explained, “A young woman tells a joke in Portuguese.” And in fact, it was funny – not for the text, which I followed only vaguely (“A doctor tells his patient to . . . “) but for the abandon, the hip motions, and the timing of the final “boom – boom – boom.”). Given the suggestive pose of the poster, I wasn’t at all certain what we were about to receive.

From there, Ruhl’s piece rapidly set up the farce: we begin in the living room of middle-aged but very well kept and attractive Lane, a physician (Lauren Lane, billed for her 6 years on the TV series The Nanny and now teaching at Texas State at San Marcos). She discovers that her newly-hired Brazilian maid (Smaranda Ciceu) has been sitting glumly in the house and not cleaning. Lane is discomfited, uneasily suggesting to Mathilde, the maid, that perhaps she might wish to do something about the bathroom. . . .

Uh, oh, I thought, we are in for an exploration of social class and exploited migrant labor. . . . but no, in a rapid set of developments Lane’s plain, socially stunted sister Virginia (Barbara Chisholm), a fanatic for cleaning, arranges to sneak into the house and do Mathilde’s job for her; Mathilde tells of her deceased parents, “the greatest jokesters in Brazil” (who obligingly appear as fantasies, incarnated by Tom Green and Alicia Kaplan); the women gradually realize that Lane’s surgeon husband Charles must be having an affair; and eventually Lane discovers both their conspiracy and that of Charles, who has run off with one of his aged patients immediately after performing her mastectomy.

Lots of commotion, lots of fast and zany dialogue, and suddenly Charles and his new paramour Ana are announced at the front door. Blackout, intermission.

In the second act, these characters collide with the agreeable energy of pinballs. Charles and Ana (played by Green and Kaplan) earnestly explain that they have found in one another their soul mates, and entreat the others to understand; Mathilde, briefly fired by Lane and then reinstated, is immediately at home with Ana, who is from Argentina. When Lane sends away the new couple, Mathilde winds up splitting her time between the two domiciles. But Ana’s cancer quickly recurs and she determinedly rejects medical care. . . prompting Charles to silly, desperate tactics and serving to realize a series of reconciliations.

There are many delights here. Smaranda Ciceu as Mathilde the maid is appealing - - for her earnest devotion to following up her parents’ love for jokes and her adroit portrayal of miscomprehensions both cultural and linguistic. Her concentration and big-eyed intensity in reacting to the other characters speak worlds of innocence – and in a crucial scene near the finale, her bewonderment and grief are heart-breaking.

Lauren Lane merits her star billing. She functions as the “straight man” for all the others’ eccentricities but her superb timing and subtle, visibly progressing reactions hold her at the center of the action. Here is a disadvantage of theatre in the round – inevitably she has her back to some part of the audience, who get a completely different “read” of the action, unable to follow it in her face. The tradeoff, of course, is proximity, so that the audience feel that they are sharing a living room with the characters. Director Dave Steakley has worked conscientiously with his blocking to minimize the disruption, but the fact is that if one were seated across the playing space, one would see a different play. 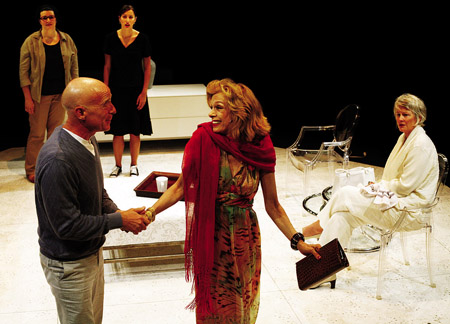 Each actor completely inhabits his or her character. . . and yet, and yet. . . .At the end I joined the good-hearted ovations for the actors, but later, upon reflection, I found myself profoundly uneasy with the play.

Not for the presentation, but for the text itself. And all the more because of the plaudits given to the author.

This is cruel comedy, as all comedy is, and it is administered with a stiletto touch.

These characters are as thin as paper dolls. For example, Charles, the successful surgeon, is presented as a genial idiot (no blame accrues to Green, who does wonders with a character written as impossibly simple-minded).

This is a play for and about women. Lane and Virginia, the sisters “who do not look alike” are differently obsessed with control and are unable to deal with men or with their own emotions. The melancholy Mathilde has no back story other than that of her joke-infatuated parents and her desire to become a comedian. (How did she get to the United States? How did she wind up as Lane’s employee?) Mathilde serves as the “Innocente,” foil to Ana, and observer of the madness of others. And the noble Ana. 30 years a widow - - when facing death, she becomes the voice of commitment to whim and of resistance to the medical establishment.

And what is the Great Joke, the best joke in the world, the one that Mathilde seeks without cease to articulate? This is the secret that she communicates to Ana as the end approaches. We are left to imagine it – and to suppose that the Great Joke may turn on the futility of passion, on the incomprehension between the sexes, or on the fact that whatever we do or seek, we are all doomed to die, leaving our ends unaccomplished.

“The Clean House” is a box of chocolates laced with belladonna. One might taste and enjoy it just once, without harm, but one is tempted to dip into that box again and again.

Currently celebrating our 82nd Season, ZACH Theatre is one of Austin’s most vibrant and innovative performing arts organizations, creating intimate theatre experiences that ignite the imagination, inspire the spirit, and ...