Review: The Book of Mormon by touring company
by Michael Meigs

The crowd at Bass Concert Hall at the University of Texas was bubbling with gleeful expectation for the opening performance in Austin of The Book of Mormon tour.  They responded enthusiastically throughout the evening and went away plainly satisfied with the spectacle and the storytelling.  Those South Park guys did it again, as confirmed by all those Tony awards, including the one for best musical, using their cheerful cynicism and satire to tap into the American consciousness.

Perhaps television and other media have shaped us this way, with their  relentless push of events abroad so violent that they seem like cartoons and their frequent debunking of the self-important and sanctimonious.

The Book of Mormon links those spheres, parodying the requirement of Mormon practice that each maturing Mormon male depart from home into the wider world on a mission to recruit for the faith. You’ve certainly seen them, two by two, young men designated as ‘elders,’ dutifully dressed in dark trousers and white shirts with ties, making their way from door to door with an appeal to consider the religion and the Book.  The exuberant opening number of this musicale is a multifold celebration of that doorbell-pushing, smiling, hopeful encounter. 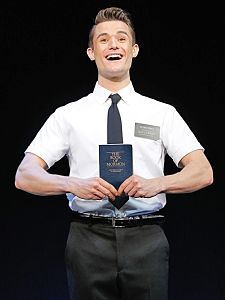 The program has no list of musical numbers, so if like me you haven’t already absorbed the cast album, you have no idea what’s about to hit you.

The show’s a lot of fun. It’s much less about the relatively hermetic but intriguing Mormon religion than it is about teenage angst and ambition, qualities common to all males on the brink of adulthood – individuals who are eager to receive recognition as grownups (elders) but who aren’t yet at ease in their skins. There are lots of opportunities for satire here – the earnest, egotistical golden boy Elder Price (Mark Evans), the goofy sloppy dreamer second banana Elder Cunningham (Christopher John O’Neill) and the eight or so other white-shirted innocents who first play the missionaries in training and then a similar band of the bewildered boys sent to test their religious certainties upon a village of miserable, violent, oppressed and depraved Ugandan natives.

Nothing’s funnier than seeing received certainties disproved by the real world.  In familiar South Park fashion the writers contrast the legends of the faith – especially those mysterious golden tablets delivered by an angel to Joseph Smith – with the brutalities of ‘real’ life: AIDS, violent  oppression, parasites, murder, rape, pedophilia and the humiliation of forced sodomy.  Hah!  Take that, you pure of heart! 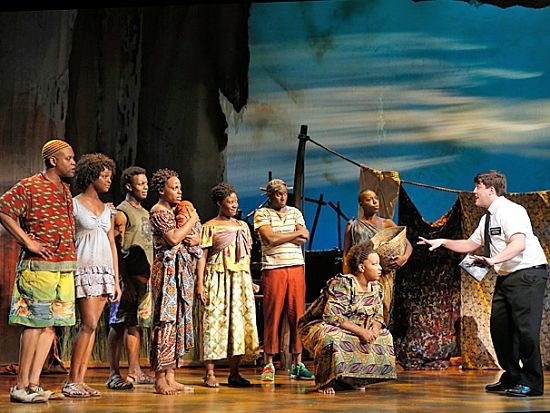 This sweetly enlightened community is doubly threatened by outside powers: the senior elders from “Salta Laka City” and the local warlord.

One of the show’s visual and conceptual delights is the lengthy ‘hell dream’ sequence midway through Act 2.

The outcome and the triumph of boy band of missionaries and their new African Mormons is contrived but it’s a fantasy world, after all. Elements of Mormon belief mix with Tolkien lore and Star Wars characters, initially in Cunningham’s imagination, subsequently in his precepts for the villagers, and finally in his vanquishing of evil.

Coarse language and merciless mocking of the sacred may be too much for some. The couple seated next to us disappeared at the intermission, perhaps pushed over the line by Elder Cunningham’s Man Up! Number comparing himself to Jesus facing impending crucifixion

Religious teachings and holy books are prime material for adaptation and satire, and we’ve seen such pieces often in contemporary theatre – from Jesus Christ Superstar to Paul Rudnick’s The Most Fabulous Story Ever Told to Corpus Christi by Terrence McNally.  The more familiar the story is, the quicker and often more visceral is our reaction. As a somewhat unusual and quintessentially American minority, the members of the Church of Jesus Christ of the Latter Day Saints offer an easy hook upon which to hang the comic coming-of-age story. Smart, unapologetic and unprovoked by all of this, the Church takes out three welcoming full-page color ads in the middle of the program.  How cool is that? 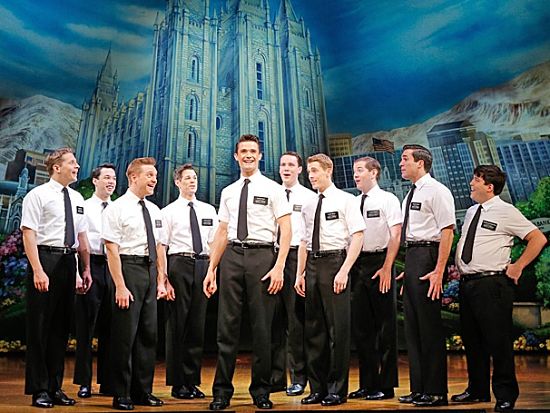 Mix in with those absurdly over-the-top contrasts all the combustible hormones of adolescence, rev it all up with high-energy clowning and Las-Vegas-style choreography, and you can just ride over the cognitive bumps in the road. You can laugh at the droll African man chanting in his mellifluous baritone, “I have maggots in my scrotum!”

Maybe not so much at the professed belief that fucking a baby will cure AIDS; and probably not at the enigmatic x-ray that appears to show the Book of Mormon inserted deeply where the sun don’t shine. 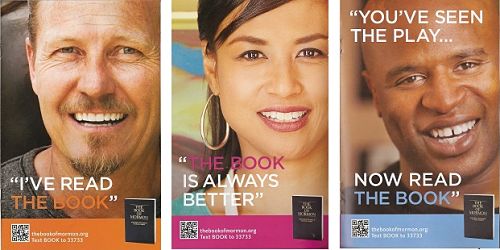 At a key confrontational moment an African woman villager pronounces, “It’s all a metaphor, anyway.” There wa san appreciative murmur from the audience. That sentiment that might be taken as the theme of The Book of Mormon.

The show pushes into our faces the quintessential problem of Good and Evil. It laughs at the absurdity of cultural differences but offers no solutions other than those of the TV remote control, magical thinking, or a lively curtain call by a large cast of mostly young, healthy and grinning actors.

As we made our way to the exit with the cheerful crowd my friend the ordained minister, who had laughed heartily through much of the show, commented with a somber headshake, “This show was dealing with some deep and serious issues.”

I had to agree; and having lived in Africa for 12 years and in the developing world for 19, I had the fleeting thought once again, that we in the United States still don’t understand how blessed we are, whatever our religion or origin or attitude toward the rest of the world.

Review by Robert Faires for the Austin Chronicle,  October 7 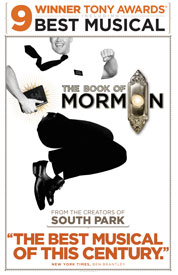