Bethany appeared first to the Austin public and to friends of Tutto Theatre in the warm and supporting setting of a private home in Westlake, last weekend. About twenty persons gathered in a living room comfortably furnished with artwork, masks and handicraft from across the world.  Bethany was pleased to see all these friends at her "mom's house." She hurried about, offered us cookies, disappeared momentarily and then came back, rubbing the arc of her belly from time to time and taking a moment to decorate it with a Post-It™ note:  "Alien on board."

There was no fourth wall in this staging and in fact there were no walls at all, unless you count those enclosing the house. Kathleen Fletcher as the massively pregnant Bethany was hyped, self-hypnotized, eager to talk and to please. She told us that she was fifteen months pregnant with her alien baby, ready to deliver and confidently expecting the arrival of her lover at any moment. She invited questions, and one or another of us in the gathering hazarded a carefully neutral inquiry. Eventually someone asked how she knew, exactly, that the being in her womb was an alien, and Bethany eagerly shared her impressions of that late night alone when she found herself in the presence of the unknown, telepathically and corporally uniting with a being articulating with incomprehensible but perfectly understandable speech.

I thought momentarily of asking our hostess if this was an "illegal alien" but I refrained. That would have been rude, almost disbelieving, and Bethany was so eager to please us and to share her transformation. Kathleen the actress behind those owlish spectacles and beneath all that additional volume would certainly have responded with grace and probably with wit.

Written by a man, The Alien Baby Play is not, strictly speaking, a play. It's a monologue in which a woman now abandoned by her family and out of touch with this world embraces something larger than herself. In an early throw-away line, Bethany dismisses the possibility of this being a hysterical pregnancy ("like they showed on Glee"). She tells us she withheld the news from her twin sister as long as she could, and when she eventually opened her heart and showed her belly, her twin rejected her as a wayward liar.

Bethany settled with great familiarity on the arm of a great leather chair where a young woman, visibly pregnant, was watching and listening with attentive concern. She responded hesitantly as Bethany sought to chat her up, and replied that no, she had not, in fact, worried whether her own offspring would be an alien.

Contractions, contortions and sudden ballooning gymnastics would interrupt Bethany's intensely confessional narrative, at times so abrupt and convincing that one wanted to seize that tormented body, comfort her and bring her to rest. The crises passed, one by one. She repeatedly peered at the living room windows and told us that her lover would materialize first as a reflection hovering over her own image there. She was adamant that the transformation was coming. And indeed, it did.

The setting reinforced the illusion enormously, and Fletcher acknowledged that afterward. "Next we go to the Salvage Vanguard," she commented after reappearing, having shed Bethany, Bethany's appendage and Bethany's scarcely contained hysteria. "Not at all the same setting. In comparison, Bethany will be homeless."

That comment made me muse for a while on the respective roles of Gary Jaffe as director and of Fletcher as the protagonist in the piece. One might imagine that the director's job would consist in large part of planning the physical movement on stage -- the blocking. But the venues differ greatly and the audiences at the SVT will presumably be less available for interaction, more able to take refuge within their ranked seating and their anonymity as spectators. The consistent factors in this collegial conspiracy between director and actor are, necessarily, the definition of this literally larger than life character and the pacing of her presentation -- pacing being both Bethany's excited striding and the maintenance of the emotional arc of the story. Their collaboration is a sure one.

Nicholas Walker Herbert's script provides some memorable word pictures, including especially Bethany's recollection from childhood of a family car trip through the desert that brought a brush against the otherworldly. Recollected in tranquility, the words provided for Bethany and the concept of her situation seem fundamentally masculine. Women are otherworldly -- aren't they from Venus, after all? -- and it's somehow easier to blame the mystery of gestation and birth on forces alien to masculine understanding.

Perhaps a woman writing about these subjects might have expressed a greater enthusiasm and stronger identification with the being taking shape within her body. She would probably have spoken with greater familiarity about the female body and the extraordinary physical changes involved in conception and procreation. That's no more than a footnote, however; in this production Kathleen Fletcher will make you believe in the impossible, no matter how the script was produced.

Comments by Elizabeth Cobbe at the Austin Chronicle, January 26 (177 words) 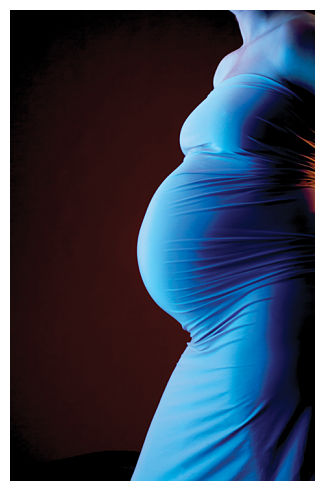