Nurtured together, produced in tandem and presented as a double bill at the Blue Theatre, Paper Moon's Phineas Hamm and Cambiare's Messenger No. 4 have surprisingly little in common.  They appear the same evening in another of Ia Instera's intricately imagined sets but otherwise they're different in style, in concept, costuming and cast.  Fraternal twins couldn't be more different.

What they do share, however, is a wistful belief in the power of the stage to alter the ordinary, normal predictable narratives of life.  Rachel McGinnis and Will Hollis Snider go about it in different ways but at heart they're dreamers, enchanted with transformations. 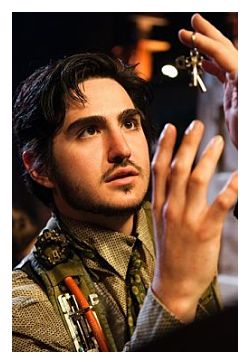 McGinnis and David Meissner, partners in life and in Paper Moon Repertory, invest a great deal of attention in the visual presentation of the story of Phineas Hamm.   The opening tableau is memorable, a painterly depiction of mystery and elegant squalor.  The simple story has elements of many a childhood fantasy, including the choice of that quaintly 19th century name.  In our tender years we probably all dreamed of achieving magic control over life, whether by stopping time or casting spells or discovering that we were really, truly someone completely different from the person we'd learned to be.

That magic thinking is embodied by Phineas's worried, overworked father the clockmaker (Jay Michael Fraley), who spends long hours in his shop tinkering with a mysterious invention.  He dies without completing his genius device, a mysterious mechanism worn about the neck.  Despite the efforts by his distraught mother (Brie Walker) to stop him, Phineas appropriates the apparatus and tries to make it work. Here as well is a theme common to us in life, either in childhood or later -- the desire for some way to bring us to a parent who has gone missing. 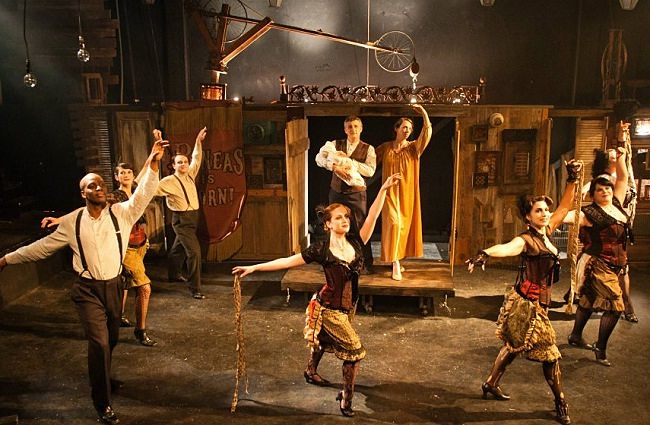 There's doubtless no direct relation between the stories, but I was unavoidably reminded of Martin Scorcese's film Hugo.  The film features an orphan lad in a mechanical world, intent on solving a mystery embodied by a mechanism his watchmaker father had been repairing. 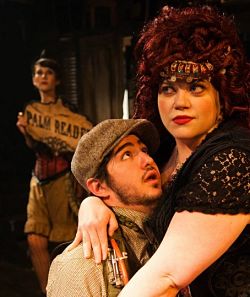 McGinnis and Meisner don't use Scorcese's 2-D/3-D cinema approach; they use the live 4-D of the stage.  Playwright/director McGinnis's concept is -- for lack of better shorthand -- Brechtian, in that the episodic stories of Phineas's transformations through different life possibilities are related by a troupe of players who could have been recruited straight off the stage of The Three Penny Opera.

The principal device of the plot is the principal device in the possession of the boy.  Phineas learns that by pulling a lever he can arbitrarily enter into a completely new reality, finding himself in new circumstances with new relationships.  The motley cast assume and shed roles smartly to match and portray successive realities.  There's a slinky grace in the dance and stage movement, choreographed and led by Kaitlyn Moise. 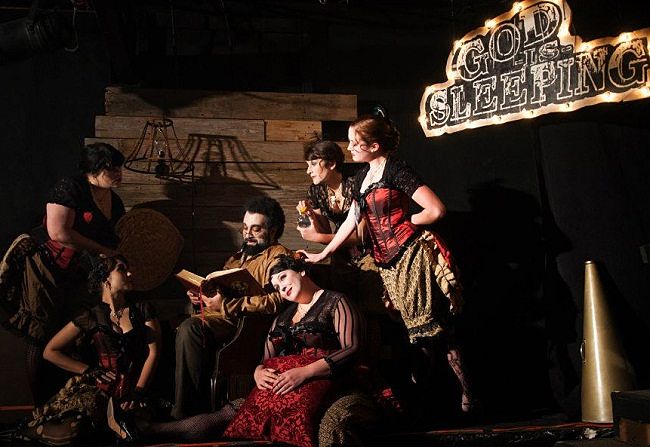 Toby Minor serves multiple duty as a ghastly, ghostly stranger with great circles under his eyes; big Omid Ghorashi is a looming figure of power.  In the opening tableau he's up on the second level browsing in the works of Shakespeare under the fancifully lettered signboard advising God Is Sleeping and later he's a factory foreman as mean as any in The Jungles both of Upton Sinclair and of Austin's Trouble Puppet Theatre Company.  Aaron Alexander is a multipurpose character, in one stint as a ferocious wrestler intent on giving Phineas a thrashing -- an encounter alternately frightening and massively comic.

Gabriel Peña is Phineas.  We wait and watch as he withholds himself in each succeeding reality, aware that he can escape with no more than a shift of a lever.  With a fairytale logic, the structure, themes and concept of McGinnis's creation oblige Phineas to overcome that temporizing, to choose and to invest himself eventually in someone and some place.  Peña is credible as a Phineas who's alert and sensitive, a protagonist although no hero, capable of learning the lessons that the playwright/director and all those circling cast members confidently performing around him are working to teach.

Review by Adam Roberts for the Austin Chronicle, March 2

Click to go to the Indie GoGo fundraiser for Phineas (goal: $1500) 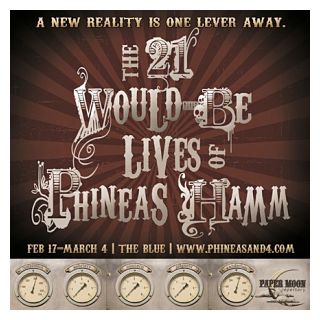