Austin has lots of 'seat-of-your-pants' theatre, the sort in which a group of friends or acquaintances or newly recruited players get together for a single project.  They band together for the satisfaction and the thrill of performance, and as often as not their audiences are constituted of friends and family.  Chris Fontanes and associates terming themselves the Bottle Alley Theatre Company showed courage and initiative in publicizing their four-night run of his script Stage, and they attracted the attention of Adam Roberts, theatre writer for the Austin Chronicle as well as me at AustinLiveTheatre.com.

Stage was staged at The Broken Neck, a completely anonymous performance space next to almost anonymous garages and workshops just south of the intersection of Cesar Chavez and Springdale in East Austin.  I'd been there before, for Gary Jaffe's Love in Pine last February, so I knew how to find it in the Austin gloaming; otherwise I might have driven around at random since there was no sign of any kind and not even any exterior illumination.  Fontanes was there at the entry, however, and he made me feel welcome for the third performance on a typically sparse Thursday evening.  One supposes that The Broken Neck wasn't available on Saturday, since it has a reputation as a 'punk rock' venue (does 'punk rock' still exist?  Perhaps it does!).

The concept for Fontanes' piece is straightforward.  The audience is witnessing rehearsals of an unnamed piece by a relatively tense cast.  In the course of the hour or so we spend with them, we learn that the script is only about thirty pages long; it revolves about a dream, essentially a nightmare, in which the woman protagonist seems to be haunted by the vision or the memory of a young woman acquaintance who may or may not have set herself on fire, igniting the contents of a gasoline canister with a Zippo lighter.

We don't really understand much more than that of the imaginary playwright's intention, even though she -- Lily, played by Ariel Gilman -- hangs around the rehearsal with us, commenting upon events.  In fact, we can't really perceive the characters of that piece, because they're obscured by the actor-characters who are working with edgy energy trying to define them.  Stage is a work about the process of staging.  Fontanes wants us to understand the effort and the tensions of those who gather to enact the story for us.

It's not an entirely new concept.  Theatre folk have regularly undertaken to pretend to show us what goes into the making of their uniquely collegial art.  The theatrical convention usually accepted by players and audience, that familiar suspension of disbelief, is that the story appearing before our eyes is new, spontaneous and bounded only by our imaginations; the audience happily forgets that the apparent spontanaiety springs in fact from long hours of writing, revision, rehearsal and collaboration.

The actors are already casually occupying the performance space when we filter into The Broken Neck.  Derek Vandi is doing push-ups and extended yoga moves at center stage, oblivious to the others.  Lexi Burrows and Jennifer Finley wander across the playing area, sharing confidences and chatting.  Tim Olivarez is hunched in a front row seat, near Danica Coffman, who's holding the playbook in her role as assistant director.

But once the work begins, what a conflicted company Fontanes and friends choose to show us!  Lily the playwright is scarcely engaged and is certainly not being consulted; director Stefan (Olivares) is caustic and rejecting, and as he snarls at actors' efforts, he offers very little in the way of guidance.  He apologizes aggressively to the audience for what they've been obliged to witness.

I had been fairly closely involved over the previous three weekends with another seat-of-the-pants production here in Austin, so I had some points of comparison.  The principal contrast for me was the absence of the story that actors were seeking to tell.  Add to that the feel that without that central focus, the collection of players were not functioning as a team, and they lacked guidance. Directors come in all flavors, of course, but in the collegial world of the theatre, Stefan would have had to be a real success somehow or sometime in the past in order to afford to be such an asshole.  But there's no indication of that; and in fact, there's very little by way of real back story for any of the characters.

Lexi Burrows as Sorel, the actor playing the haunted female character, is alert, intense and noticeably self-controlled under the abuse and denigration she's getting from her unhelpful director.  She permits herself to be testy with others, especially with Vandi, endowed by the script with a big smirking ego and not much brain.  Burrows' character as the focused actress contrasts with her character in the play, who is confused and literally recumbent.  She's particularly impressive as she responds to Stefan's insistence that she repeat a key monologue -- "but this time with hate in it!"   Jennifer Finley as Marin serves as an attractive foil to her in both roles.  Megan Simon plays Penny, a distracted actress arriving late to rehearsal to play the dreamy apparition who evidently set herself on fire.

The dynamics of the imagined rehearsal process seem too conflictive to convince, but the spirit of the piece lightens considerably when the 'work' onstage is interrupted.  The women actresses have an easy rapport and are quick to tease one another.  Olivarez doesn't descend from his director's pedestal -- in fact, he more or less stalks out of the playing space with it -- but Vandi as the inept Durant turns a bit more affable with a perhaps insincere praise of the work by Sorel, the lead (Burrows).  There's some cute courtship going on between the actor-characters, perhaps a reminder that one of the reasons that would-be artists gravitate to the stage is that it's a fine place to meet interesting people.

I was reminded, perhaps somewhat irrationally, of the 'lost wax' process of sculpting, which I once had the opportunity to watch in an African village.  The artist crafts in wax a figure or sculpture, then carefully encloses it in clay or another fire-resistant medium.  The whole package is heated, so that the wax melts and dribbles away, leaving a perfect mold into which heated metal can be poured.  The aim, of course, is to produce that finished figure or sculpture in unmistakeable bronze, a realization of the artist's concept.

In this metaphor, Stage doesn't give us the wax model or the finished sculpture; what we have is the exterior of an awkward and unformed mold.  We don't even really see the sculptor at work, since the script does not provide the back stories that would provide motivations or establish relationships for these actor-characters.  We respond to them viscerally as they appear before us in their appealing energy, but we don't have any sense of who the actor-characters reallly are.

Stefan the director halts the rehearsal and leaves.  We witness some additional exchanges among the actors.  The players gather, join hands and bow.  An earnest and concerned young man in the audience behind me asks, "Is that it?  Is it over now?"  And he's assured that it is.

Okay, I'm intrigued.  Bottle Alley promises to return to their makeshift stage.  Welcome to the seat-of-the-pants world in Austin; I'll be pleased to see them again, especially Lexi Burrows.

Review by Adam Roberts for the Austin Chronicle, September 13 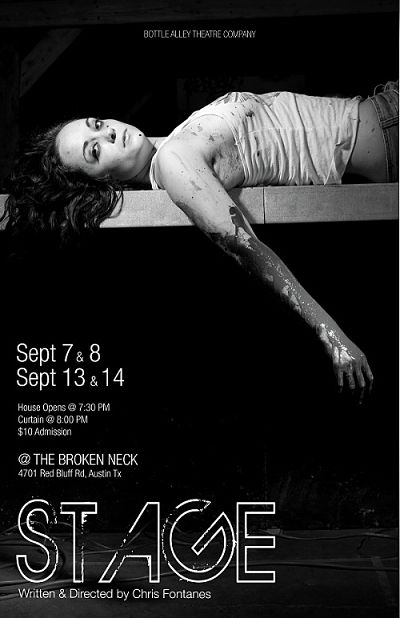