You don't see much of Agatha Christie in the United States any more, except perhaps in public libraries and the occasional revival of one of her many plays.  Airport newstands rarely offer murder as genteel puzzle any more, instead stacking up thick paperbacks with vibrant covers, done by Clive Custler or Sue Grafton or any of a number of other contemporary producers of blockbusters.

Different Stages does us a service by providing an accomplished and amusing production of her mid-twentieth-century curio, Spider's Web.  Most of Dame Agatha's familiar elements are there: an isolated old manse in the countryside, a collection of proper, well brought up English folk, a murder and some earnest police officers trying to clear it up.  There's a mystery to solve -- who assaulted the despicable Oliver Costello with a blunt object in the secret passage?  Christie is very sporting with her puzzle, scattering clues along the way like Hansel and Gretel dropping breadcrumbs in the woods. 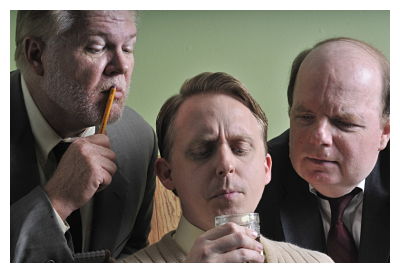 Spider's Web is a comedy rather than a thriller. Clarissa, the vivacious young wife of a much older British diplomat, happily plays country hostess as husband Henry, all atwitter, rushes off to deal with Foreign Office business.  She teases and charms the three men visiting from London -- her former guardian, who has been knighted; a half-deaf old country duffer; and a young man from London who courts her shamelessly. Christie mixes in a couple of eccentric servants, the wicked dope dealer who gets bashed, and the plods from the local constabulary.

Clarissa discovers the corpse tidily stretched out behind the sofa, and a turn of events convinces her that her 14-year-old stepdaughter did the deed.    Determined to protect the child and equally set on avoiding disruption of her husband's career, she decides that the body should be stuffed in the bad guy's car and left in a nearby woods.  Her problem: to convince her quite proper and honorable guests to help her move the body and set up a cover story.

I've left out the desk with the secret drawer, the back story about the former owner of the property, hubby's divorce from a wife who had become a drug addict, the discussion of visits from individuals looking for something mysterious and supposedly of great value, the stepdaughter's comic appetite, the port-tasting competition, and Lord knows what else.   But the events of the plot are like slalom poles in ski competitions -- we enjoy watching the characters taking them at full speed while still maintaining that comedy of manners. 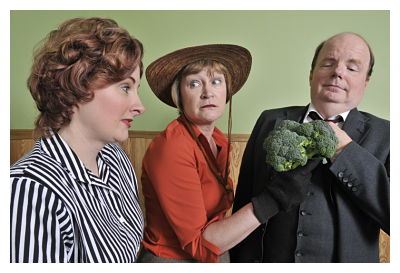 Christie wrote this 1954 piece as a commission to feature popular cinema actress Margaret Lockwood, remembered today chiefly for her leading role in Alfred Hitchcock's 1938 film The Lady Vanishes.  Nikki Zook as Clarissa shows us how Lockwood must have enjoyed the role, for she's bubbly, earnest, loyal and endlessly imaginative.   No matter that she flings herself into the frankly criminal enterprise of moving a corpse and obscuring the circumstances of a murder -- we know that her intentions are the best.

Since the playwright dismisses the husband (Larry Oliver) early in the play, Craig Kanne as her former guardian Sir Rowland Delahaye speaks consistently for common sense and decency and is quite outmanned.   We enjoy Clarissa's elaborate persuasion and pretending, as well as the cover story's eventual collapse under investigation.  The cat and mouse game is not between criminal and detective but rather between a spontaneous fantasizer and the minions of the law (Julie Winston-Thomas as the inspector and Trey Deason as the much-put-upon constable).

The mystery has to be solved, of course, and there's an obligatory dramatic revelation at the end.  I wasn't entirely convinced by the transformation of the malefactor, who failed to reek of the evil required for a would-be triple murderer.

Particularly vivid in this piece were Bobbie Oliver as the brisk gardener lady with the broccoli and Angela Loftus as the sweetly vulnerable and ever-hungry stepdaughter Pippa. David Young, most frequently seen onstage in Lockhart at the Gaslight Baker Theatre, does a fine job as the really bad guy who promptly winds up as an inconvenient corpse

Review by Elizabeth Cobbe for the Austin Chronicle, July 8

Click to view program for Spider's Web by Different Stages