Review: Somewhere in Utopia (A Travesty) by FronteraFest
by Michael Meigs

Face it: there's no use getting annoyed with the theatre of the absurd, no matter how confusing it may seen. Or even with the neo-theatre of the absurd such as this piece by Jared J. Stein, produced a good 50 years after the audacious thumbing-its-nose-at-the-bourgeois art style hit the European stages.

In Somewhere in Utopia Stein portrays a dystopia: two principal characters are fixed unthinkingly before a television screen as the audience files into the black box of the Salvage Vanguard Theatre. One slim, nervous androgynous white-skinned creature is wearing a black Harlequin-style mask; the other, a stolid, angry African-American glaring at the television, is wearing a white mask. There's a lengthy, subtle silent play between them as we wait for the action to begin. With almost no movement other than Bobby's apprehensive trembling and occasional changing of the channel and the sustained glare of Marcus, they are establishing a full story even before the house lights go down. I was fixed in my seat by the vibrating tension between them, made even more painful by the callow undergraduate talk in the seats behind me, a couple of rambling conversations about weekend activity and plans to study abroad. Couldn't those spectators see that there was a full-blown silent catastrophe occurring right in front of us?

Director Becca Plunkett leaves no character of Stein unturned. There are four in the piece and actors' sexes are transformed. Bobby and Marcus are certainly women but seem to be representing men locked in some sort of mutually destructive relationship; the narrator when s/he appears is a self-confident prancing and sneering actress carefully painted to have five o'clock shadow. The fourth, emerging from a heavy, mattress-sized vinyl bodybag, is Cassady, a fast-talking pseudo-American-Indian girl portrayed by a man with the lean figure of a runner,wearing a skirt and an impossible headdress.

The two initial characters Marcus and Bobby are locked in emptiness, perhaps best expressed by the stronger one's repeated, snarling declaration, "This is SHIT!" Marcus might be referring to the programs on the television, which is turned away from us; the reference might be to the misery of their shared world, which appears limited to the single room before us; Marcus might be referring simply to the script of the play, an angry condemnation of the artificiality of the theatre itself. The only incursion of the outside world is the daily delivery of the mail, an event awaited with great anticipation and trepidation. Kinsey Keck has the victim's self abasement, unable even to get away to go to the bathroom, and Jazz Thomas as Marcus is a furious immobile stormcloud.

Contrast those feelings to the smarmy self-satisfaction of the perpetually costume-changing "narrator," a character who might well stand for the playwright. That one pops up repeatedly, talking textual mumbo-jumbo. Alison Meagher-Manson is listed as "Tongue in Cheek (the narrator)." She tells us with seductive self-confidence that s/he is more attractive, more creative, better fucked than any of us.

After many exchanges and failures, the meek Bobby finally gathers the courage to leave the tormenting Marcus. Meagher-Manson appears in yet another dapper transformation of costume, this time with a mustache escaped from some turn-of-the-century barbershop quartet, and delivers the bag of Indian maid. Riley Webb's loquacity and fast moves completely cow Marcus the tormentor.

Don't worry if you don't catch every word of the patter in Webb's lengthy speech. You'll get to hear it started again, from inside the body bag, as someone in the back of the hall claps to indicate that this precarious and careering fantasy is declared to have ended.

It's a challenging script, and the history of its production in workshops and in full stagings over the past fifteen years suggests that Stein is deeply invested in it. His gift of it to  Plunkett, recently a student at Southwestern University, and to the ambitious young Out of Context Theatre Company is evidence of the confidence he has in them. Does the androgyny spring from Plunkett's imagination? It's not evident in the text, as heard, but it works impressively well. The  four actors show a discipline and grasp of the difficult material that makes it compelling.  They may inhabit an empty world but there's not a lagging moment in the performance. Minimalist designs for the set, costumes and props are by Leslie Turner, assisted by Chaz Sanders.

The company may well have expected some expressions of rejection from those confused by this script. At their website -- and perhaps on that program leaflet that I misplaced -- they provide a 2001 encomium from distinguished academic and playwright Leon Katz that evidently accompanied an earlier publication of Stein's script:

Readers make up their own minds, and are not particularly thrilled to get advance opinions meant to sway them. But in this case I have to sin, and  urge. Jared Stein's is so remarkable and original a voice that I'd hate to see its fantastic quality inadvertently overlooked.  He's written what Beckett and Arrabal have made into a genre:  a comedy of universal rage, so skillful and deceptively understated in its implications that most audiences could, sadly, miss the rage and settle for the unhinged comedy. Do yourself a favor, reader, and, beyond the unhinged comedy, take deep note of what makes it remarkable -- its summing up of political and cultural life now as surpassing de Sade, and doing it with a sense of image and language that, to my mind, puts it awfully close to the company of the great ones noted above.

Somewhere in Utopia plays twice more at the Salvage Vanguard Theatre, Friday, February 3 at 9:15 p.m. and Saturday, February 4 at 3 p.m.  Go ahead, get out of your comfort zone and stretch your mind.  Maybe getting annoyed will do you good.

Somewhere in Utopia (A Travesty)
by Jared J. Stein
FronteraFest 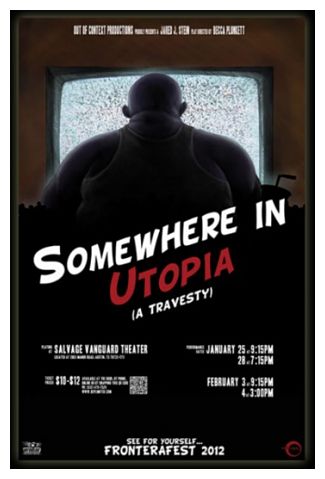