Review: Singin' in the Rain by Georgetown Palace Theatre
by Michael Meigs

Those could be the rallying cries for the Georgetown Palace Theatre. Under the years of Mary Ellen Butler's artistic direction, this community institution in the elegantly refurbished movie house off the courthouse square has seen very little down time, given its eight-show season and its classes for adults and for young people. The staff and the unpaid actors and tech folk send familiar musicals and plays down the chutes one after another to their loyal and enthusiastic weekend audiences.

Singing in the Rain, the 1952 musical film from MGM, has been an enduring success, a work that was one of the last and finest examples of the the American film studio tradition of musical cinema. That art form originated with Al Jolson's The Jazz Singer, the very first nationally distributed "talkie."  It flourished through the 1930's and 1940's with Arthur Freed, Vincente Minelli and others, and then died away in the mid-1950's. Just as the talkies had put an end to vaudeville, the new medium of television drained away much of the audience for studio musicals. The standardization of network broadcasting in full color was a factor in families' decisions to stay home in the living room almost every weekend rather than to attend movie houses such as the Georgetown Palace. Hollywood continued to produce musical films but they were expensive spectaculars such as West Side Story or adaptations of Broadway shows such as The Sound of Music. Almost none had the assembly line directness and simplicity of this Gene Kelly - Debbie Reynolds - Donald O'Connor vehicle.

In 1974 Tinseltown put together the nostalgic anthology film That's Entertainment, a low-cost assemblage from the MGM library directed by Jack Haley, Jr. and  featuring narration by recognizable aging stars including Astaire, Kelly and Bing Crosby. It was such a success that the studio got Kelly to direct and narrate That's Entertainment II just two years later. By that time a more truthful title might have been That Was Entertainment.

So it's a special pleasure to see this accomplished live theatre production of Singing in the Rain take place at the re-glorified palace where it surely must have played 60 years ago. And to be entertained within it by Rich Simms' full-screen video re-creation of a 1920's swashbuckling black-and-white silent film in the best wild old style.

Singing in the Rain is built on a buddy trio. It's a simple story. A couple of former vaudeville song-and-dance guys landed on their feet in Hollywood in the 1920's. Don Lockwood has been buckling those swashes D'Artagnan-style in a succession of hokey costume films while Cosmo Brown pals along with him. It's phony glamor but it's a fine living, so who cares? Even if Don has to pretend to the fan mags that he's infatuated with his elegant perpetual co-star Lena Lamont. Love snares Don, in the form of Kathy Selden, an aspiring actress who declines to be charmed by him. When she later pops out of a cake (fully clad, mind you) at a studio party, we just know that our boy is a goner.

But you've seen the film, haven't you? You know that the principal challenge to true love is finding a way for our modern-day three musketeers -- or, rather, our 1920's-modern musketeers -- to thwart the arbitrary demands and iron-clad contract of co-star Lina Lamont. Who just happens to have a voice that will never make it into the talkies . . . .

This show charms with the zing of its tap-dancing energy, the catchy tunes by Arthur Freed and Nacio Herb Brown, and the clever plot line from the screenplay of Betty Comden and Adolph Green. Most of the music was recycled from earlier MGM musicals by Freed. Director Ron Watson doesn't shy away from memorable scenes from the film -- Cosmo's "Make 'Em Laugh" spectacular, for example, the trio tapping and singing "Good Morning," and Don's memorable "Singing in the Rain" (done, yes, with an impressive and exhilarating rainfall right there on the stage of the Palace).

All those are good things. But the real charm of the film and of this production is the chemistry at work in the trio of leads. It's terrific in this show and terrific in a distinctively different way from that of the movie. Gene Kelly was the athletic all-American guy; Donald O'Connor was the antic quicksilver class clown; Debbie Reynolds was Miss Perfect. Watson's casting at the Palace has produced an exhilarating variation. Here the athlete is Kevin Oliver in the role of Cosmo  -- with a great big smile, the muscles of a basketball player and the mugging ability of O'Connor. Jim Lindsay as Don Lockwood is smaller of frame and light on his feet; he has happy charm and such a natural grace that one immediately sees right through his pretending to be a snob. Gene Kelly could have been a finely tuned baseball player; Lindsay could be a grown-up edition of one of those balletic Sharks from West Side Story. It's particularly satisfying to see this new side of him, for in the Palace's Evita he played a Juan Perón of strictly military bearing and correctness.

Slim, attractive Sara Burke returns to the Palace, her home venue, after doing the lead as doomed adolescent Wendla in Zach Theatre's Spring Awakening. She sings and dances as if born to it -- an Ariel of musical theatre, conjured up out of fondest imaginings.

Laura Galt does the villainess Lena Lamont with the trademark lower-class accent and a voice so screechy that it made me wonder if she might be obliged to live on inhalants and hot tea with honey in order to survive. And to top that, she has her own number "What's Wrong with Me?" that drew well deserved applause.

Watson and choreographer Jessie Smart fill up the stage with tap dance, fun and celebration to the music of the six-member band hidden behind a scrim high up on the set. Their overture on opening night was a bit haphazard with some notably harsh notes from Nicolas Balleza on the trumpet, but they got it together quickly in the first act.

There's a large supporting cast with several familiar faces, including Cici Barone, Pete Muñoz, Suzanne Orzech, Jennifer Tucker and Ismael Soto III, who is doing his third Palace show in a row, if I count right. The women's dance ensemble has flair, polish and (dare I say it?) pulchritude; it's a pleasure to be allowed to ogle. Matthew Burnett as the droll, vain Hollywood producer Roscoe Dexter steals several moments with his perfect timing. And don't miss fightmaster Toby Minor, who appears in the movie as the nefarious foil-wielding bad guy.

The Palace is packing 'em in.  Its on-line ticketing service provides a map of seats available for each staging and you can verify that this weekend's performances are essentially sold out. Singing in the Rain runs through March 25; for many of the remaining performances, including the 2 p.m. Saturday matinees on March 17 and 24, only scattered seats remain, usually either in the front row or up in the balcony.  Never mind the locations; go get 'em.  [UPDATE, March 11: The Palace has announced additional Thursday performances March 15 and 22.]

This is one that could run for another month or two, if the only consideration were audience demand. It's probably just as well, then, that this is community theatre, where players can't be coerced into an grueling extended schedule. It's a high energy show and they're singin' and dancin' their hearts out for you; get down there if you can, give them the applause they deserve, and wish them a well deserved rest after the last Sunday of the month.

Click to view ALT video interview of the leads with images from rehearsals, February 17 (7 min.)

Click to view excerpts from the program of Singing in the Rain at the Georgetown Palace Theatre. 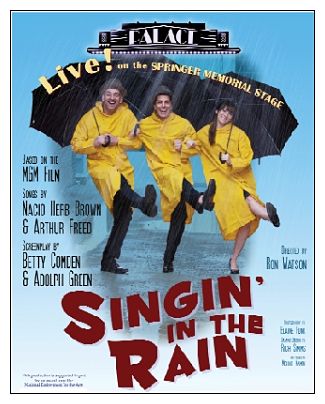