Rent is the sort of production the Zach theatre uses to pay the rent: the staging of a familiar rock and roll work with appeal for the young, for the young professionals, for the creatives and for the club goers. Seen as daring at its 1996 debut, Rent has become sufficiently mainstream that it can be staged in community theatres, summer theatres, and, this past February, even by the kidsActing studio here in Austin.

Director Dave Steakley gets a powerhouse performance from a cast consisting redundantly of "local Austin artists."

You just can't help being seduced by the spotlight numbers in this show: winsome Andrew Cannata and Kristen Bennett doing the wickedly funny Tango Maureen,  the irrepressibly strutting Joshua Denning as Angel the drag queen extraordinaire in the damn-your-eyes-love-me glitzy Today 4 U (Tomorrow 4 Me), and Ginger Leigh's leering, laughing physicality in the trippy story about the cow that jumped Over the Moon. 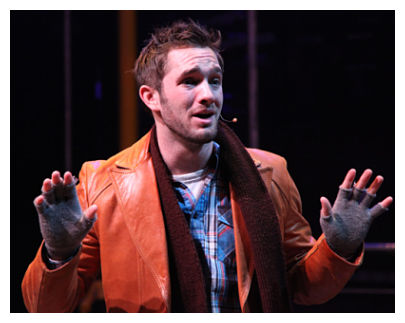 Multi-talented Jonathan Larson did book, music and lyrics for a story that he based loosely on Puccini's La Bohème, the elegantly sentimental 1896 opera portraying a bunch of down and art artists in Paris and the doomed romance between a writer and Mimi, the street waif who dies of tuberculosis in the last act.

Puccini's work has been called the most popular opera of all time, and Larson's use of it is a savagely ironic premise.  No doubt all those affluent parents in Scarsdale and similar well-trimmed suburbs (West Lake Hills, for example, or Lakeway) had the cash  and leisure to buy opera tickets, as their neglected children grew up unguided and then slipped off to the grime-smeared once-upon-a-time low-rent districts of the Bowery.

This reviewer was Rent-deprived, living outside the United States as the show and its concept thrived and spread.  Part of Rent's success was America's gradual positive response to the campaigns of gays, lesbians and transsexuals to find acceptance in American life. 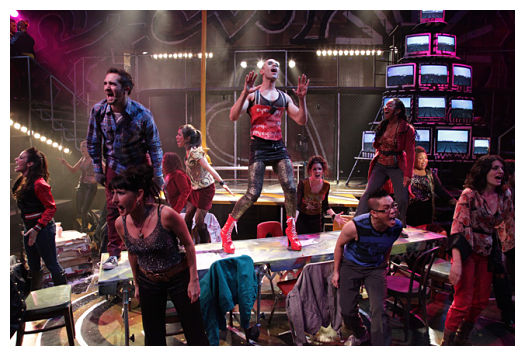 Without much exposure to that cultural background and none at all to the work itself, I bought the CD recording of the original cast.  In the days before the opening, I would listen to it as I drove about Austin.

The sound track alone is confusing, because Rent is a non-stop rock-and-roll cantata with lots of characters.  On opening night I had the satisfaction of seeing Larson's music and lyrics click into place in the story in Michael Raiford's cleverly designed multi-level set evoking the grimy squalor of New York bohemia.

This bravado creative job strongly recalled for me not Puccini but instead the flinging tribe of the Galt McDermott/Joseph Papp musical Hair of thirty years earlier.  In fact, Rent shares a fair amount with an even earlier piece, from 1904 by James Barry:  Peter Pan, or The Boy Who Wouldn't Grow Up. 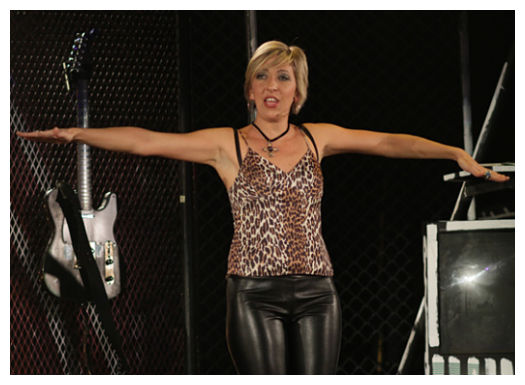 Few of us really want to grow up, after all. It's natural to reject the world  of our parents -- those successful self-satisfied idiots who just don't understand us but keep phoning us up, even so.  And reality isn't -- or shouldn't be -- the obligation to bend or shape ourselves to be useful, when the world is so full of heady possibilities and wonderful sensations.  The promise of Neverland is seductive.  We can make our own family, our own tribe, our own collection of Lost Boys (and Lost Girls and Lost Others).  And wouldn't it be nice to have a convenient Angel to catch us and send us back from our excesses for a second chance?

Never mind that. You can relax and go with Zach's flow.  Robin Lewis, that dance genius from Tex-Arts Lakeway, created some terrific choreography for this show and you'll be jumping in your seat as the company gyrates, synchronizes and surprises all around the stage.

The show roars -- literally.  The band dimly visible behind the chain link fence at center stage has got its amps turned all the way up under the direction of Allen Robertson.  Microphones on the singers are not sufficient to protect them or us.  If you want to catch the names and understand the witty philippic in the Act I finale La Vie bohème you had better have read the text or listened to the CD ahead of time.

All of these artists have the vocal abilities and the moves. 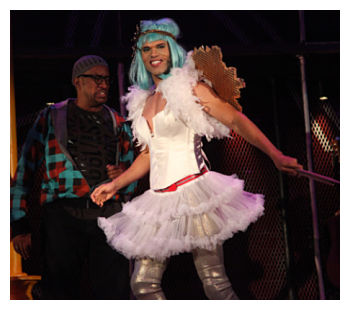 Standouts among them are the odd couple Joshua Denning as Angel -- slim, sassy and ultimately fragile -- and Roderick Sanford as his lover, Collins of the rich deep voice and sturdy, grounded physique.  In a hectic tragicomedy where affective confusion is the norm, these two credibly embody the only visible example of commitment.

Living, after all, means burning out and dying, eventually.

Even in la vie bohème.

UPDATE, October 10 from www.thefoodiegirls.com: Sensational news is that Foodie Girl Verity Branco has stepped up in the lead role - playing Mimi - in the hit musical, RENT!

Comments by sha219 at austinpost.com, September 25

Review by Sarah Pressley for the Daily Texan, September 30

Review by Barry Pineo for the Austin Chronicle, October 7

Review by Spike Gillespie at her blog "Spike Speaks," October 17

Dave Steakley's note in the program for Rent

Click to view excerpts from the Zach Theatre program of Rent 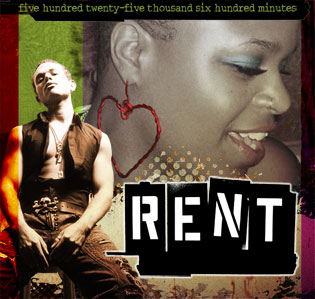