A slightly-built man dressed in T-shirt and slacks is led to a high black stone cube by law officers.  After gaining the top of the cube, the man is chained to it, arms and legs, by a high official in a suit.  The man says nothing as law enforcement officers and the suited man berate him as a traitor for releasing the files to, of all hideous groups, the American public. The officers curse him, spit at him, praise the government and promise him he’ll be confined there for eternity.

In this very clear scene in the new play Privacy Settings: A Promethean Tale playwright Heather Barfield makes an identity of Edward Snowden of the NSA and the Greek Titan god Prometheus (played by Trey Deason), chained to a crag by Zeus and visited by disemboweling eagles for eternity. That’s how much the highest authorities hate the free flow of information. 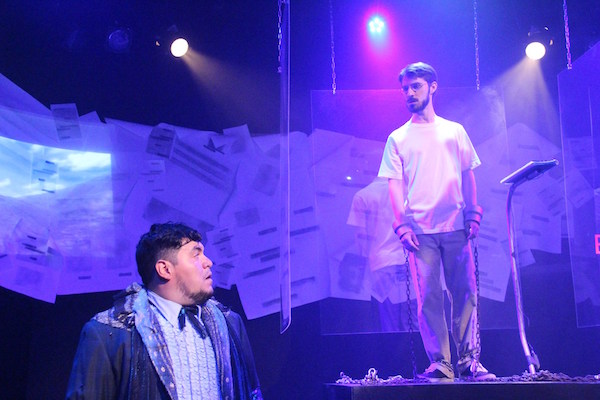 Zeus is so mighty that he is played by only two aspects of his power. Might is played by Karen Jambon, happily plucking a plum role as an acting project aside from her usual directorial efforts. Violence is played by Katie Moore, a relative newcomer to the scene.  These two are the law enforcement officers (and torturers) on scene. The well-dressed official is Hephaestus, Zeus brother at the forge (played by Nathan Porteshawver).

Privacy Settings: A Promethean Tale is a cautionary play based in Greek myth, about the immensity of power and how civil rights seem to dissolve in the wrestle and spin of geopolitics. The vehicle of the oppression is your very own computer and all your devices. In the fugue state that is the second act, audiences members are shown actual catalog pictures of devices, “boxes,” that steal, read, or encrypt data without permission. These are all commercially available. The first lesson of Privacy Settings: A Promethean Tale is that we’re all in the game, like it or not.

It is all very understandable. The citizenry needs data to function in this computerized world. We need to share data; we also need to protect it. The government at all levels needs to assist in the protection and also investigate the data of terrorists, criminals, and spies. When should the government open your protected data to investigate someone else? Can we get an apology? Should we encrypt our data against the government?  Can we actually succeed in that? Can verbal interrogation techniques be extended to data questions under current law? Can the law protect us anyway? Privacy Settings: A Promethean Tale brings up all these questions and more in the first act. The play focuses our attention on the several real world issues it illuminates, from drones to cyber sex trafficking. The feel of the first act is of a documentary program rather than of a dramatic play.

The strength of Privacy Settings: A Promethean Tale is its sourcing in Greek mythology. Playwright Barfield identifies Edward Snowden with Prometheus, and all other comparative elements fall instantly into place around it. Zeus, who condemned Prometheus to his crag, is the oppressive government that, regardless of nationality, inevitably finds free expression a threat to the free exercise of its power. The other gods sort out naturally. Hermes, the messenger of the gods and sustainer of education, is loyal to Zeus, of course, and represents the FBI, far-rearching and swift. He is played by Blake Robins on automated skates. Hephaestus, hard-working and very technical, forged the shackles that hold Prometheus eternally, and in the play he heads the NSA; Hephaestus is played by Nathan Porteshawver. The several structural parallels here speak clearly to Greek mythology’s illustration of human mental structures, a quality observed by Carl G. Jung and said by him to be archetypes that represent human universals. 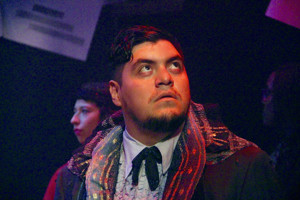 And so it goes. Oceanus, god of the seas and brother but not friend of Zeus, visits Prometheus on the crag, streaming naiads and seaweed. He appoints himself Prometheus’ attorney and says he can get Prometheus off—but the price is Prometheus’ silence. Stop all activism and above all don’t rock the boat of the gods. Their punishments are for eternity. Jesus I. Valles-Morales plays Oceanus as a worldly-wise public defender grown cynical on the profits gained by defending the guilty and the poverty-stricken. He engages the space and audience with his flashing eyes, booming voice, and excellent timing; anyone dragged into court would want him in their corner.

Io is played by the stunning Leah Vineland, and Pandora is played by the similarly well-favored Susan Bennett. The two goddesses in tandem hold the key to Prometheus’ release, but the solution will take generations.The rescue of Edward Snowden is not likewise prefigured in Privacy Settings: A Promethean Tale or in reality.

The other gods and goddesses are Delanté G. Keys as Argos, Olivia Jimenez as Hera, Ingabirano Nintunze as Athena, and Heidi Penix as Atlas.

The second act was entirely audience-interactive, an engaging activity that began in the guise of an intermission. The audience was divided into small groups and led out to the lobby and outside environs of the Vortex theatre complex, there to be berated and pushed around, given a taste of oppression, as it were. Then many of us received direct text messages with personal information about us. How did….? Exactly. The point here is that few of us know how much private information about ourselves is floating around out there, freely available. The act two interactive was very similar and easily as clever as Katie Green’s Twin Alchemy Collective and its crafting of magic-tinged audience journeys. These two companies are willing to roll the dice on outcomes, allowing them to be different for each audience member. 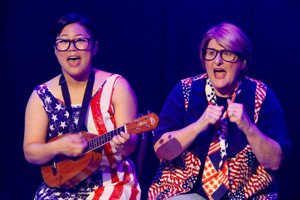 It seemed that everyone on this clever treasure hunt had to find a box and give it to a trusted god. The story had morphed imperceptibly into the tale of Pandora’s Box. This reviewer attended the show on June 3, 2016. That night was intensely rainy and lightning-strewn, the Vortex yard muddy and flowing.Nobody knew whom to trust. Some felt they were being sucked bodily into a digital game, one with a completely unknown outcome and a high risk of eternal punishment. Eventually all the groups were rounded up and taken in turn to a small room at the lower end of the yard to be interrogated about the boxes by. . . Karen Jambon and Katie Moore, Might and Violence, respectively. The duo pushed on the audience with glee. Without touching any audience member, the two torturers created feelings of uncertainty and fear in their subjects, at least as this reviewer experienced it.  Somehow, soaked and muddied but with a great sense of relief, all the groups found their way back to the theatre.  Altogether and in retrospect, the experience was a huge amount of fun.

The audience had gained numerous object lessons on how governments can spy on and intimidate their citizens. Not all the questions raised by the play were answered; perhaps they cannot be answered. There was a timed ten-minute question and answer session at the end of the play.  After that, when everyone left the theatre Prometheus/Snowden/Deason remained chained to the block. Eternity means eternity.

Privacy Settings: A Promethean Tale runs May 25-June 18, 2016 at the Vortex, on Manor Road in east Austin.

2-for-1 admission Thursdays and Sundays with donation of 2 cans for SafePlace. 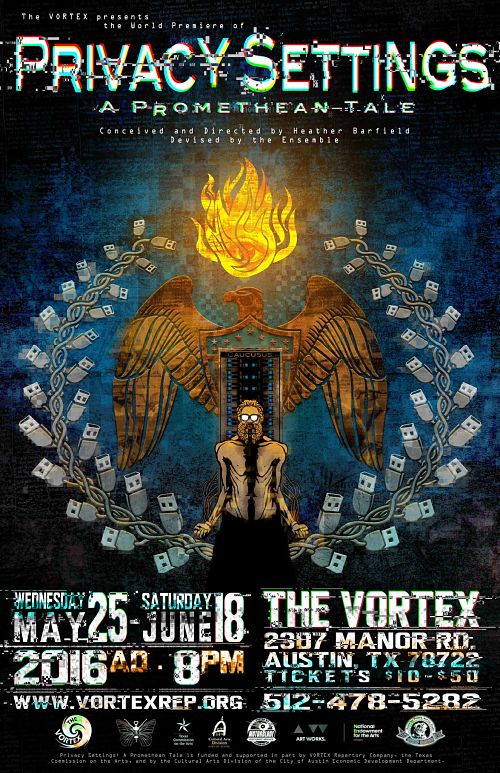