Review: Priscilla, Queen of the Desert by touring company
by Catherine Dribb

Priscilla Queen of the Desert is a rambunctious montage of 80s chart-toppers and truly magnificent costuming.  The national tour which pulled into Austin last week is no exception.  Unlike our trailer eateries, Priscilla (a fabulously renovated old bus) supports no hipsters, cowboys or college students typical to the Austin scene, but rather a trio of performers. Two drag queens and a transvestite are traveling through the outback to perform at one of their member's, Tick's, ex-wife's resort (are you confused yet?), and, unbeknownst to the other two lip-syncing divas, to meet his son.

Along the way, of course, Priscilla the bus breaks down, the trio meet an array of Australian people, and everyone encounters more than their fair share of hate-crimes.  But, they make it to the far away city of Alice in time, and give a dazzling performance to an enthusiastic audience which includes Tick's own young son.  True to the child-like nature that we, the audience, wish for all fathers and mothers and Americans and Aussies, Tick's son embraces his father, and asks, could he please read him a bedtime story.  It's really great. 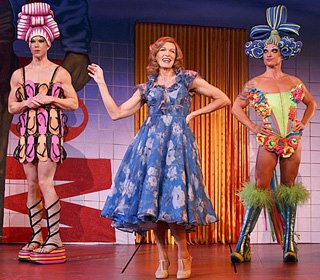 This is a musical about "alternative lifestyles," acceptance, and prejudice.  But, as it touted its own caricatures of the human race (did you see the scene featuring the overweight, mullet-sporting, she-man in the Outback bar?), sometimes I found it hard to laugh, even when the direction obviously called for it.  Seeing Priscilla so soon on the heels (pun intended) of America's fascination with the McDonald's eating, Africa- American story-teller who rescued three women in Cleveland last week, I wondered, how much are we just welcoming an opportunity to watch two drag queens and a transvestite go at it?  Have we missed the hero for all the humor?

'Cause it's campy; even apart from the bus and the outback.  There are a lot of cork-popping, Madonna-singing, martini-drinking characters.  And be prepared for a lot of stereotypical drag jokes and bawdy humor too. But be prepared for something more.  Underneath the glitter and glamour and costumes rivaling a Dr. Seuss book, is a story about what it means to be human... to want love, to find love, to lose love, and to receive love.

And besides that, its fun.  Who doesn't love the 80s and a couple of (female) divas floating in from the sky to sing "Its Raining Men?"  Plus, Scott Willis' performance as Bernadette, the has-been icon, was awesome.  Very tender, very funny, and very real.

So if you're looking for an out of town act to transport you from Austin's own adventurous theatre scene into the bling of Broadway and the orneriness of the Outback, this is the show for you.  The singing is great (dang, those ladies suspended in mid-air can seriously sing), the storyline is sweet (grandma loves a kid who can project onstage), and the outfits are out of this world (you guys, five hundred Tony award winning costumes).

Priscilla Queen of the Deser, runs now through May 12 at the Bass Concert Hall on UT Campus. Tickets are available through Texas Performing Arts.

In Dallas, John Garcia of The Column theatre arts e-mail enthuses over Priscilla in a 6100-word review, May 14

Priscilla, Queen of the Desert
by Stephan Elliott and Allan Scott
touring company 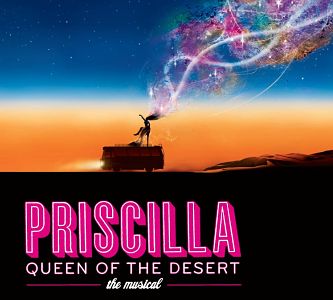