First of all, though Rupert Reyes and his Teatro Vivo assure you that this is a “bilingual comedy,” their generous-hearted Petra’s Sueño is in fact written more than 90% in English. The meaning of virtually every syllable of the Spanish dialogue is made clear by restatement in English, in context or in mime. You could speak not a word of Spanish and yet still capture everything; and if you do understand Spanish, this confection is more delicious still.

Matter-of-fact, optimistic, and industrious without complaint, the apparently childless middle-aged Petra (Irene González, center) operates a tortilla factory and shop in a small town somewhere in south Texas. The framed show posters displayed in the modest lobby of the Long Center’s Rollins Theatre show that over the past 8 years Petra has featured in the often-produced elements of a Teatro Vivo trilogy – Petra’s Pecado (Petra’s Sin), Petra’s Cuento (Petra’s Tale), and this dream play, Petra’s Sueño. Reyes, who plays Petra’s equally amiable and hard-working husband Rafa (Rafael, in light blue shirt) writes in the program, “. . . it’s time now to say farewell to the Petra plays. Well, maybe not farewell forever, but we do not have plans to produce these plays again in the near future. Now, Teatro Vivo is poised to take our wonderful audiences to another level.”

Assuming that other Teatro Vivo productions have followed the approach of artistic director/playwright Reyes, this declaration suggests that the group may have decided on a paradigm shift – and the announced 2008-2009 season (detailed below) reinforces such an interpretation.

Though perhaps half of the audience that filled the 400-seat Rollins theatre on Sunday afternoon was of Latino origin, this Petra play is a valentine to Anglos and to second-generation Mexican Americans, inviting them to appreciate and enjoy the friendship, family ties, honesty and humor of the thoroughly cross-cultural inhabitants of a small town. These characters are no complainers and no ideologues. They discuss briefly the inadequate compensation initially offered by a manufacturing firm planning to relocate to the town; and Rafa is detained by the border authorities (“la Migra”) because he forgets to take his citizenship papers when he goes to buy a tortilla machine in Mexico. But the townspeople are fully capable of dealing with these problems. They agree on a counterproposal to the factory and Rafa is quickly set free by his distant cousin, who happens to be running the border crossing office. The problems and follies of Petra’s Sueño arise from misunderstandings, an occasional excess of pride, and from the literally diabolical machinations of the black-caped Devil (Michael Mendoza, right) who engages Petra’s guardian angel (Natalia Marlena Goodnow, left) in a contest for that good woman’s soul. (This is a dream, remember.)

The plot is light and builds a narrative with comic, illogical developments, in which the bad guys are caricatures of wickedness, as in the best vaudeville (in good groundling fashion, I was tempted at times to boo or hiss but I contained myself). Mendoza made a flamboyant Devil, seated in his throne of darkness above the sets, and he certainly enjoyed himself – though sometimes in his imprecations he deformed his deep and mellifluous voice with a fricative rasp not really needed for the characterization. Playing Mendoza’s obsequious devilish assistant Grano, Rudy Sandoval was a delight, a slender sinewy strutting clown with attitude. And Petra’s nemesis, the nefarious rival tortilla shop operator Tina Tamayo (Yvonne Flores), was a wonderful cartoon villain full of mendacity, so ambitious to defeat Rafa (Reyes) in the mayor’s race that she contracted devil’s assistant Grano as her political consultant without bothering to check the price: her eternal soul. Even non-Spanish-speakers got it when the wicked Tina offered arch campaign remarks in an impossibly Gringo accent.

Also appearing as a cartoonish character is Petra’s guardian angel (Natalie Marlena Goodnow, robed in white and sporting wings touched with tinsel). Wounded in her contest with the Devil, the Angel is obliged to stay with Petra for four weeks, until her wings can grow back. She is innocent and earnest as Petra shields her and creates a legend for her, but in her temporary mortal condition she progressively adopts human vices and passions. Goodnow incarnates these changes and becomes the bad daughter we all want never to have, at least until the resolution in the second act. This slim, focused young actress has great presence throughout, moving from cartoon to fully realized character.

But the actors giving us Petra, her husband and her employees – the merely human characters -- are the prizes of the piece. Even though the plot is by turns silly, wistful and illogical, with their warmth, vulnerability and sympathy, the actors make both their daily lives and their fantastical transports very real. As Petra throughout the 8 years of the trilogy, González is certainly well known and liked by Teatro Vivo’s audiences. Anyone there would have been happy to shop at Petra’s Tortillas and to vote for Rafa for mayor. A special applause goes to JoJanie Segura as the tortilla shop’s principal employee Tacha. She first appears in curlers and a billowing nightgown to answer a late-night telephone call from Petra. Alternately tough and tender, ebullient Tacha is the center of the play. Her voyage beyond death in Petra’s dream is dramatic and touching, as is her quiet deathbed reconciliation with fellow employee Chano (Tomás Contreras).

Mary Alice Carnes’ direction keeps the action lively, and she makes the most of the comic shifts of character and scene in Reyes’ script. This cast must have been a pleasure to work with. The set was functional and convincing; putting the Devil up above the action might not be theologically correct, but it certainly helped fill up the barren space of the Rollins Theatre, a cavern big enough to serve as a garage for three tractor trailers. Music was lively and appropriate, although I could have used a bit more volume on the “radio station” interludes. One quibble on the lighting, which was otherwise appropriate – the decision to use a “window frame” projection on stage right was unfortunate, since it cast unnecessary and distracting shadows on faces.

[Click here for Pati Hadad's July 2005 review in the Austin chronicle of
the earlier Petra's Pecado.]

[Click here for a profile of Michael and Celeste Mendoza, by Jeanne Claire van Ryzin] 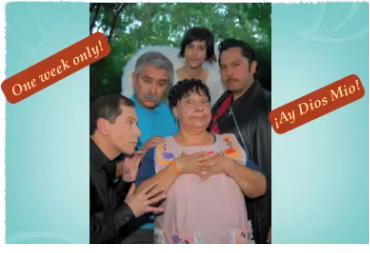