Parade by Robert Uhry and Jason Robert Brown is the story of the mob murder of Leo Frank, whose story ignited a powerful movement for justice in the early 20th centuryUnited States and led directly to the founding of the Anti-Defamation League. The musical is up for a very short run now at Ground Floor Theatre, 979 Springdale Road in east Austin.  It's an impressive work of art and a compelling up-to-the-minute statement on our own perilous times.

It's a statement piece, of course, but also a singularly strong work of performing art in its music, lyrics, and book.  All pay honor to the story of Leo Frank, and Ground Floor Theatre’s production does justice to all its elements.  Director Lisa Scheps and Musical Director Adam Roberts have created a concert version of the large work. Without elaborated stageplay, the music and storytelling seem condensed and enriched, adding to the story’s power.

The stage design made it all work.  The playing space was divided into thirds from up to down. The upstage third, an elevated platform, held the choral ensemble in front of a large screen on which images and lighting sets were projected. The middle third held the eight-piece orchestra, stage left to stage right, with conductor Adam Roberts. The lowest third held the featured singers who entered in period costumes, holding a few props, and sang their songs. The design was relatively straightforward and highly effective. The acoustics of the theatre space, which oddly have taken a number of critical jabs in the theatre’s short life, were above reproach.  This reviewer changed his seat to widely dispersed points three times in order to assess the aural facts carefully. 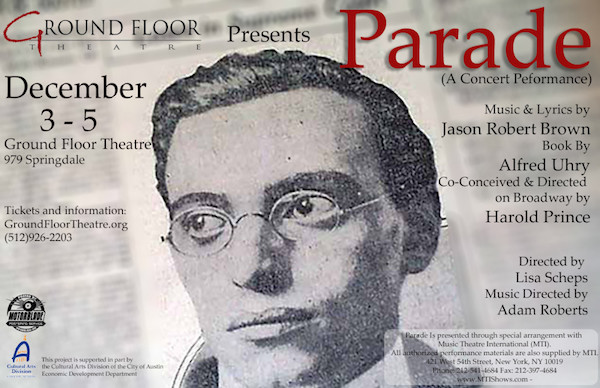 A talented cast hurled their songs into this receptive sonic environment. Scott Ferguson played the lead, Leo Frank, and Sarah Danko played his wife Lucille .Parade explores numerous themes with its large cast of characters; employing her impeccable acting skills, Danko embodies the theme of love in the ruins, proclaiming the power and tenacity of love. Danko’s Lucille shines forth from the darkness that surrounds her.  Lucille may be Danko’s breakout role in the Austin theatre community.

As with any large cast of generally talented actors and singers, some talents stood out from the crowd. Vincent Hooper used his powerful singing to create high points in the story; Austin is just one performance stop in his national touring career.  Chelsea Manasseri played the sometimes-dishonest maid Minnie McKnight with subtlety and unleashed her strong voice in her songs. Kristin Hall is fresh from rescuing Stalking John Barrowman from the debilitating clutches of the Dougherty Arts Center; she sings spectacularly with her peers.  Kyle Coughlin, seemingly all over the Austin musical map, stands out as the hang-dog alcoholic reporter Britt Craig, taking him a little over the top on the way to providing comic relief in the first act.

UT grad Matrex Kilgore is relatively new on the Austin performance scene, devoting most of his career time to theatrical education for social awareness and Spectrum Theatre, one of Austin's newest companies.  He performs Newt Lee, a Jim Crow victim, with subtlety and great heart, creating a gem of a role, and he sings  with a rich but understated voice. Audiences want to see and hear more of Kilgore on the Ground Floor Theatre stage.

Adam Roberts credits the updated, jazz-inflected music to a great score, but he and his ensemble deserve full credit for the energetic and uplifting performance. The music brings this show and its cry from the heart insistently alive.

Nothing’s perfect. The music and stage design cry out for choreography, dance, movement—but there was essentially none. That shortcoming is especially pronounced in the song at the reception at the governor’s mansion with several lines of lyrics about dance; absolutely nobody in the scene busted a move. Perhaps the choreographic element could not be fit into the concert presentation format. Its absence certainly does not detract from this gem of a musical production.

Everyone should come to this show. Its beauty in no way conceals the ugly face of prejudice against those of different race, ethnicity, religion, and historical heritage. Be forewarned: Some of the images are very strong. The public is urged to attend Parade during its one-weekend run, December 3-5, 2015, at Ground Floor Theatre.

AUSTIN'S THEATRE FOR EVERYONE Ground Floor Theatre began as play! Theatre Group, a jewel box theatre on Cedar Avenue and 12th Street.  In 2014 we changed our name to Ground Floor ...