Review: Oceana by The Vortex Repertory Theatre
by Michael Meigs

There is, indeed, an oceanic feel to the staging of this production. Arriving spectators are welcomed by undulatingt costumed young persons bathed in shifting blue and green lights designed by Jason Amato. The actors are welcoming, slithery, playful and exotically costumed. Director/author Bonnie Cullum extends the compact playing space of the Vortex vertically, transforming it at times into the visual equivalent of an aquarium. She stations her three singing sirens on a high shelf across the back, with the band mostly out of sight in the grotto below them.

Steel gym rings hang just out of reach of the front rows on either side of that V-thrust stage, and the sleekly muscular merpeople regularly hoist themselves fluidly up and around those swaying fixtures. Anyone with scuba diving experience recognizes at once the promise of liquid flight and freedom from gravity that they evoke. As well as the surprise and satisfaction of coming face to face with schools of  unexpectedly colorful fishy creatures -- the cast numbers 14, and most of them are somewhere on that compact stage throughout the presentation. 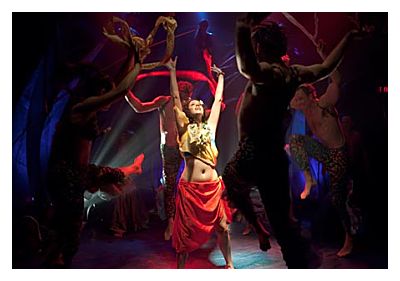 Cheerful mischief marks these goings-on. For example, I had placed myself in the front row; one of those swinging mer-guys reached down, and with a flick, untied my shoelace. While the characters spoke with mythic seriousness, they often moved in poses, prances, and postures, emphasizing their otherworldliness.

Betsy McCann plays the Gulf Girl, a naive young woman in a 19th century bathing costume styled like a sailor suit. Over the course of the evening she is whirled away by ocean creatures, moving to the trippy music of Content Love Knowles, from the Gulf of Mexico, up around the chilly British Isles, down around Africa, to the Indian Ocean, to the polar wastes and out to undersea volcanoes in the Pacific.

This is a concatenation of sea myths and, frankly, not much of a story. Except for the requirements for gymnastics and a very brief moment of nudity in the closing scene, Oceana could be offered as a school pageant with its agreeable, unremarkable melodies, percussion, and a sea-green message.

Betsy McCann is quite grown-up-girl serious in her exploration of the exoticism of the sea. She's appealing and comic, particularly when Gulf Girl is perplexed by the events. 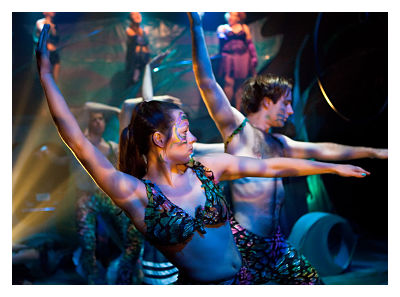 You can take your pick among the seven mythic sea beings, differentiated with proper attention to a politically correct diversity. Katherine Craft as Aoife the Celtic selkie is earnest and has the most fully formulated story to portray, while Kimberley Mead as the tempest and volcano maiden Chalchiutlicue shows a cheerfully grinning delight at the chaos she causes.

The place was packed when I attended last Saturday, and quite a few of the spectators, perhaps family of cast members, had paid the upper "bay scallop" rate for the show, which has a sliding scale for tickets. And yes, there is a downpour toward the end, which is neatly targeted to the stage and not to the audience.

Everyone had a good time and went away feeling that we in Austin are fortune to have Bonnie Cullum and the Vortex for such frolicking.

Review by Robert Faires in the Austin Chronicle, May 21

Click to view the program for Oceana at the Vortex Repertory 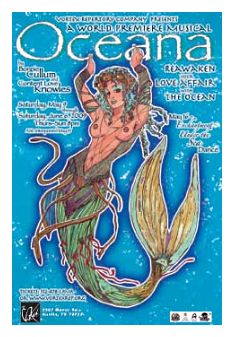