Review: Nunsense by The Georgetown Palace Theatre
by Michael Meigs

How do you make holy water?”

“You boil the hell out of it!”

Cornball, right? But funny, especially when the dialogue is between a couple of wisecracking nuns on either side of the audience.

Nunsense, a (very) musical (very goofy) comedy at the Georgetown Palace Theatre in Georgetown, Texas is playing to packed houses of very amused Georgetownians. And Austinites will have a helluva a good time if they join them.

I lived mostly outside the United States over the past 30 years, so when we relocated to Austin last year I had no idea either of Georgetown (Texas) or of the Nunsense phenomenon. I spotted an ad for the Palace’s Lend Me A Tenor, a play our son had done in high school. After studying some maps we took him and a buddy to see it. For a while, I thought we were going to be driving up I-35 all the way to Killeen (wherever that might be). But we found it, and we were impressed both by the play and by the restored movie palace just off courthouse square in Georgetown. Plus the restaurants and shops around the square.

By the way, arriving from Austin on I-35, take exit 259, 260 (Leander Road) or 261, go east for up to half a mile, then turn left (north) on Austin Avenue. The Palace will be on your left, half a block short of the Georgetown courthouse dome.

And be advised: out there near Sun City retirement community, the Palace raises its curtain at 7:30 p.m., getting them in early and home at a reasonable hour.

As for Nunsense, turns out that it debuted in New York City in 1985 and ran 3,672 performances. Translated to date into 26 languages, the show has been produced by 6,000 companies over that time. The original show -- this text -- gave rise to six more nun-themed musical comedies. An idea that originated as a series of funny greeting cards must have earned its creator Dan Goggin a pile of royalties.

Nuns as hoofers? Nuns as jokesters? Nuns as raucous story tellers? This company of five wonderfully cast actresses does it all, backed by keyboardist Kevin Oliver and friends thinly disguised as nuns, themselves (ever seen a nun with a beard?).

Playwright/composer Goggin has recreated vaudeville for us, that art form in which the multi-talented artists are happily complicit with the audience.

The over-the-top premise: a mistake by the cook for the Little Sisters of Hoboken (NJ) resulted in a poisoned vichyssoise that did away with 52 of the sisters, leaving only five, tonight’s crew of habit-wearing hoofers. The cook, by the way, had as her convent name Julia, Child of God (nudge, nudge – Julia Child, get it?).

So our doughty nuns are putting on a show to raise enough funds to plant the last of their sisters and to finance a big-screen TV.

You’d have to be very stuffy indeed not to be charmed by this extremely well chosen cast of performers (clockwise, from top left): 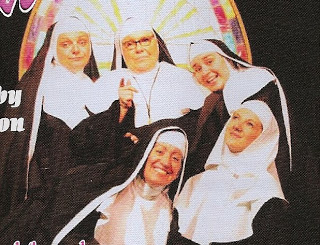 Cathie Sheridan as Sister Mary Hubert, gently scandalized by the goings-on but having the time of her life;

Melita McAtee as Mother Superior Sister Mary Regina, as friendly and brassy as you can be when dressed in black and white -- with a hilarious slapstick turn after curiosity prompts her to sniff (and sniff again) some curious powder found in the ladies’ room;

Samantha Ricker Watson as Sister Mary Amnesia, of simple mind and baby voice, who goes from giggles to a rip-roaring Loretta Lynn delivery when needed;

Sara Burke as Sister Mary Leo the aspiring ballerina, quivering with sweet ambition (in the Palace’s production of Cats last year she and her partner tore up the stage when she danced as Rumpleteazer); and

Arden Baxter as Sister Robert Anne, pugnacious funny Bronx girl longing to be a star, who does a side-splitting set of imitations simply by manipulating her wimple.

Imagine the sight of these sober-clad ladies grinning, wearing bright-colored tap shoes and stomping up a storm, and you’ll get an idea of the absurdly wonderful entertainment they provide.

The Georgetown Palace specializes in musicals and popular entertainment, and they shovel out this high quality stuff at a tremendous rate. For 2008-2009 they’ll be offering another 8 shows: The Producers; The Gifts of the Magi; Love, Sex and the IRS; God’s Man in Texas; Grease; The Little Shop of Horrors; The Odd Couple, and Big River.

The Palace is a serious rival to the Zach Scott Theatre in Austin in quality and variety, without Zach’s advantages or location.

Unlike the Zach, it is a real “community theatre,” depending on contributions of many volunteers, business support, and non-equity artists. They apparently don’t place commercial ads in either the Austin Statesman or the Austin Chronicle. Their glossy program carries no fewer than 54 ads from local businesses, 12 of these full-page.

Management of the ticketing function has progressed so much that next season, at no extra charge, you will be able to use an on-line seating chart to claim a specific seat when you purchase tickets by Internet. (I wish that they’d complete the website by loading it with the promised photo albums of recent productions.)

The Palace is a non-profit 503(c)(3) corporation, always eager to receive contributions. With grant funds and donated labor the group renovated the theatre in 1999-2001 and in 2007 acquired the “Tin Barn,” adjacent to it, to serve when fully renovated as shops, rehearsal spaces and dressing rooms. This year the City of Georgetown officially renamed the space between the two “Tin Barn Alley.”

And I didn't mention -- for what you get, the tickets are really, really inexpensive! Twenty bucks a seat general admission season ticket, but only eighteen for those over 55 years of age. Those are the per-ticket prices for this year’s Nunsense, and a student can get in for only $8. For a $5 premium this year you can pick your designated seat.

"So why did Moses wander around in the Sinai Desert for 40 years?"

"I don’t know, why DID Moses wander around in the Sinai Desert for 40 years?"

"It’s obvious! He was a man, and men don’t like to ask for directions! "

Click for an on-line review, August 10, from Ronni's Rants