Murder Ballad Murder Mystery is imagined and delivered as a clown show balanced precariously on deep and true traditional ballads.

Those ballads are deep, because stories of passion, violence and murder are rooted somewhere pretty close to our shared DNA. True, because they contain archetypes of our culture: the restless husband; the innocent and defenseless girl-child; the rapscallion, the rapist, and the rowdy. Including, of course, musicians and theatre folk. 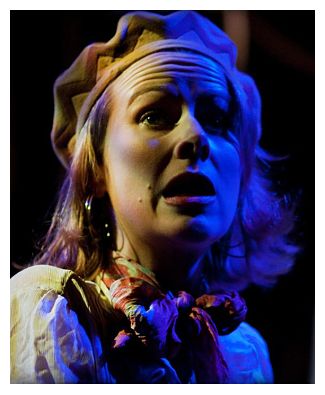 Playwright Elizabeth Doss, who appears here as the female half of a Bonnie-and-Clyde type duo, began this script while living in Spain, perhaps spurred to re-examine her own cultural traditions.

It's an odd, uneven piece. Much of the time it comes springing at the audience like an unsuspected jack-in-the-box. The best and purest moments are the quietest, when a scene or an action or a simple song is allowed to work the deep and true incantation of the underlying ballad. 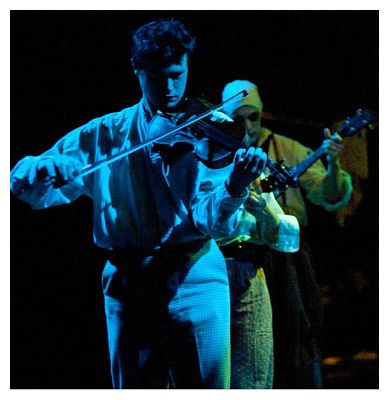 The Vortex seating plan has been reconfigured for this one, with a new rank of seating, a shallow splash pond occupying much of the playing area, and an array of platforms, ropes and climbing places. As the audience arrives, three musicians are slanging away on fiddle, guitar and banjo with all the precision and elegance of drunken circus clowns. A mandolin player with an equally Halloweenish aspect taunts them across the audience space and eventually joins them.

The first act will introduce us to the Bonnie-and-Clyde pair, to farmer Tom and his disgruntled wife, to a pair of sisters in overalls, and to a chunky, foul-mouthed mustacio'd bar owner nicknamed "Staggerlee." Catcalls, cackles and unamplified strolling music are frequent. In the second act, after most of those characters meet their deaths, Doss and Tutto Theatre have cute Kelli Bland act the somewhat rattled investigating detective for these events, assisted by handsome Phillip Emanuel as a good-karma'd forensic psychic. Their work is somewhat hampered by the fact that the dead just won't stay dead.

I like director Dustin Wills' inventiveness and his kinetic, balletic displacement of these characters. But he made one major directoral choice that raised my hackles: that rearranged seating plan. If you choose to take your place in that new section, which contains roughly one-third of the seats in the house, you are going to discover that lengthy and important sequences of the piece are taking place behind you.

Dialogue, music, drama, and movement roam freely around beind that central section. That's certainly exhilarating for the players. Not so for some of the rest of us. In aviator parlance, considering the playing space straight ahead to constitute the 12 on your personal clock, you are going to be finding bogeys "on your six" -- directly behind you -- or moving in the arc between three o'clock and nine o'clock so often that you give up trying to follow them.

As a front-row guy, I had the impression that I was being robbed of some part of the spectacle most of the time.

The solution, for those duly advised, is to avoid that apparently prime real estate in the center.  Look for a place in the Vortex's usual ranks, to your left as you walk into the theatre. 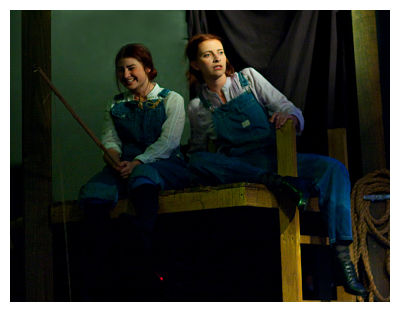 The clowning was lots of Keystone Kops sort of stuff and some decadent red-neck carrying on. Most of the time the obviously talented musicians were mangling the tunes just the way that the whooping and hollering actors were mangling the stories.

Some of the moments of depth and truth: 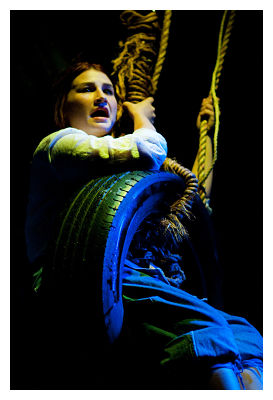 Emily Tindall and Hilah Johnson are simple, lonely bored sisters. Agnes sits fishing with no expectation of a catch; her sister Agatha poses a series of choices to her. The last is, approximately: "Which would you rather? To live forever or to die right now?" Agnes chooses, and Agatha obliges her. Agnes becomes Harp, a lonely silent little ghost high over our heads for the rest of the production. 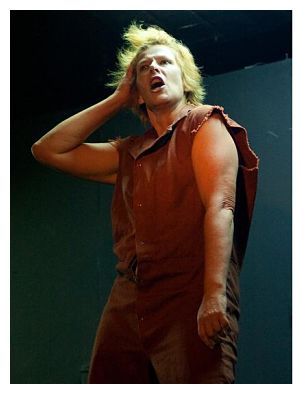 Content Love Knowles climbs a platform, shrugs out of her garments and into a jumpsuit, and delivers a rocking ferocious hot-mama ballad, "You Got What You Deserved!"

Author Elizabeth Doss in her Bonnie-and-Clyde incarnation as "B" has escaped with her man "J" (Mark Stewart) and then inexplicably begins speaking to him only in Spanish, which he does not understand. As he strums contentedly away, she sings a melodious ballad in Spanish -- cracking up those of us who can follow the language, because she is complaining about the stupidity and misery of her life with him. They then get into a fine laundry-and-water-slinging battle in the splash pond. 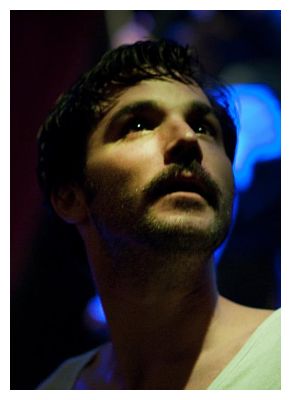 Mark Stewart later perches on a railing and accompanies himself on the guitar for a simple solo pseudo-ballad by Aaron Doss, "The Night I Didn't Kill You."

Murder Ballad Murder Mystery offers a gaudy manic mounting for those moments. Its extravagance and volume are contrived, as if to convince us that we are, really, really, having a good time making fun of the Big Bad Wickeds. 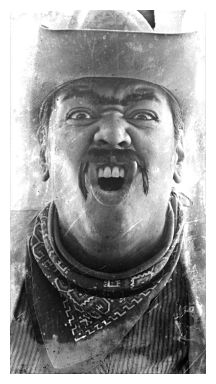 If you go, take the time either before the show or at the intermission to visit the ramshackle structure in the yard that houses cast portraits made by Daniel Brock. Ignore the intrusive sound track looped in the background. Brock's photos in stark black and white, like prints from 19th century wet plates, capture with concision the faded allure of those ballad stories.

Review by Barry Pineo in the Austin Chronicle, October 29: "I can't recall seeing many Austin theatre productions in the last 20 or so years so seamlessly perfect as this one."

Review by Bastion Carboni at austinist.com, October 30:  ". . .with audience engagement so clearly the focus, and no real reward offered at the end, the entire piece almost feels like a self-serving, flashy ruse."

Link to snippet of song "Everybody's Got to Die" and audio comments by Susan French, included in the October 26 program "Off Stage and OnThe Air"conducted by Lisa Scheps at KOOP-FM (2 min) ("great," "awesome," "fantastic," "absolutely perfect")

Lisa Scheps on KOOP-FM on the website for Offstage and On The Air: "Today my guests were all from Tutto Theatre Company's production, Murder Ballad Murder Mystery playing October 23 - November 7 at The Vortex. We had Tutto Artistic Director and director of the show, Dustin Wills; playwright, lyricist, and performer Elizabeth Doss; Composer and performer Mark Stewart and performer Kelly Bland. It was a fun show and most of the music was played live in the studio."  Click here to listen.  (30 mins)

Click to read playwright/actor Elizabeth Doss's reactions to the opening performances of Murder Ballad Murder Mystery at the Vortex, October 23-25, posted at the blog of NowPlayingAustin 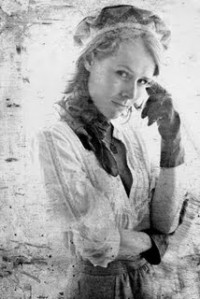 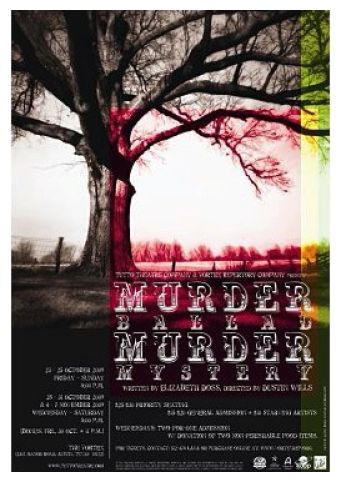