Jennifer Underwood is larger than life. Like famous stage personalities, she captures our attention utterly with her remarkable appearance, conviction and an acting talent that amounts almost to shape-changing.

In Miss Witherspoon, directed by Karen M. Jambon for Different Stages and now playing at the City Theatre, Underwood is a deeply disappointed soul in the afterlife, determined not to give in to the requirement that she be reincarnated. Sometimes, with her stubborn will, she prevails; but when the whizzbang of celestial machinery overcomes her, Jennifer Underwood becomes a cranky newborn child (twice), a distrustful abused teenager (twice), a pet, and the potential savior of the messed-up world. 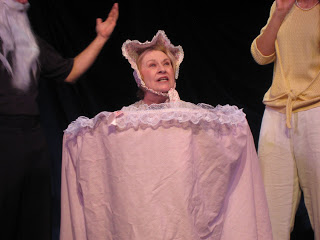 In each newborn incarnation she is a comic mixture of goo-goo baby and sharp-tongued old soul. As a pet she is blissfully wiped clean of apprehension and reluctance. As the teenager Virginia she radiates resentment and distrust but fixes her harried counselor with an attention that betrays her complete vulnerability.

Underwood herself is worth well more than the price of admission, and at times the piece becomes a one-woman show. Hovering in that unexpected afterlife, she longs for release, rest and forgetfulness. She speaks directly to the audience about her past and her disappointments (was she really Mrs. Rex Harrison?). There are stretches that resemble solo stand-up comedy here, and some of those in the full house on Saturday night took her bleak observations just that way -- a woman sitting just behind us regularly went off like a braying donkey and there was a guy in the back, less obtrusive, who had the same reactions. But Miss Witherspoon's story and musings were not Henny Youngman one-liners -- they were coherent comments on the real Dark Side of the world. 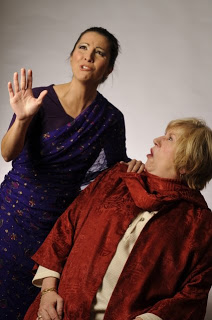 Foil to Miss Witherspoon's relentless pessimism is an eternally optimistic spirit in the Hindu persona of Maryama. Suzanne Balling had the perky personality and lilting accent of a Bollywood version of a temple goddess. As Miss Witherspoon's guide to the afterlife, she has to explain why neither Mahatma Ghandi nor Thornton Wilder happens to be available for counseling sessions. She does dutifully take on board her client's insistence on seeing St. Peter. 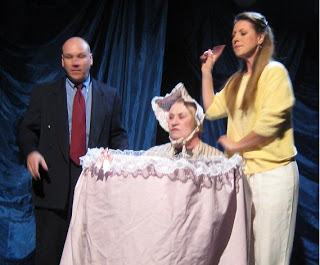 Other highly capable actors shimmer through multiple roles and realities. Derek Jones and Camille Latour become parents to our heroine three times, playing the variations from enchanted to abusive to neurotically protective. Among their other incarnations are The Giant Chicken and Gandalf the Wizard.

Patricia Robinson is the overwhelmed school counselor who tries to reach out to the death-obsessed teenager Virginia and she appears again in the afterlife follies as the extravagantly self-confident Woman in the Red Hat. 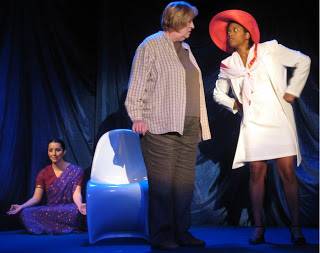 But for all the pleasure of watching these actors at work, I found myself eventually disappointed with the poverty of Durang's plotting. He gives his principal character good reason to comment on the horrors and misery of our world -- and he even sets off nuclear war in South Asia -- but he structures his talky quasi-comedy with the second-hoariest of plot devices -- action in an imaginary afterlife. (The first-hoariest of plot devices is, of course, a story that is eventually revealed to have been a dream, thereby giving the transformed character new opportunity.)

So in this fantasy there's something going on about karma. Maryama explains that every soul has to reincarnate until it gets things right -- Miss Witherspoon, for example, failed to speak up when her sister was condemned as a witch in the Salem Witch Trials. Miss Witherspoon does learn, progressively, through her incarnations. There's a wickedly funny version of the heaven for the Jews. There's also a comic treatment of Christian faith -- Saint Peter never makes it, Gandalf does, and Higher Authority also arrives. At the end Miss Witherspoon is again a newborn, with political babble that somehow promises World Peace.

And what are we to make of all that? Other than, of course, the fact that Durang can make acerbic fun of just about anyone?

As my spouse commented, "It's as if he got stuck with his plot and couldn't figure out how to end it gracefully."

Excerpts from program of Miss Witherspoon 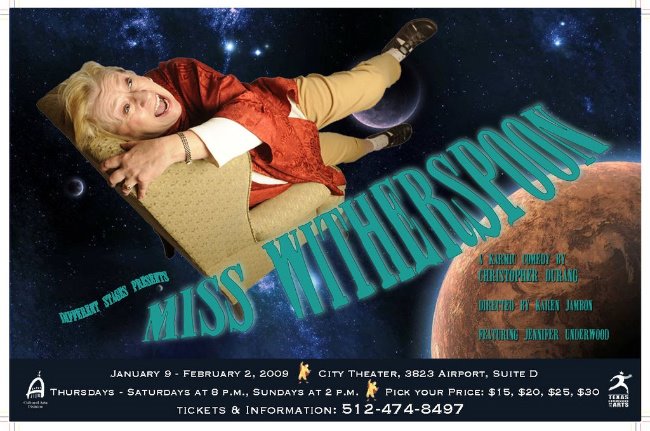