Measure for Measure is one of Shakespeare's darkest plays, an intimate and claustrophobic study of misrule.  There are no great battles here, no dazzling displays of fancy; this mythical Vienna has a stifling ambiance, a combination of bureaucratic neglect, fetid bordello and sterile cloister.   One can seek to read it as a comedy, which to some extent director Michelle Polgar has done, but one can also see it as a meditation on zealotry.

Vincentio, Duke of Vienna, is an introspective, bookish fellow who has long neglected public affairs.  In the opening of the play he abruptly announces his departure to points unknown and confides to the ascetic nobleman Angelo and to ducal counselor Escalus letters granting Angelo full power to administer the dukedom.  We quickly learn that Vienna is a stew of moral corruption, thick with brothels and generally immoral behavior.  Our jaunty guide to that underworld is Lucio, a "fantastic" well acquainted with it, and we make the acquaintance of the tapster-pimp Pompey and the brothel keeper Mistress Overdone. 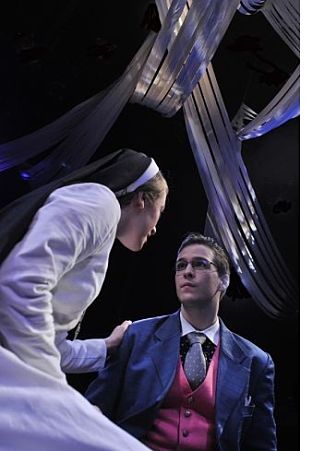 Empowered by the absent duke, Angelo becomes the swift and merciless instrument of justice.  He orders brothels in the city limits pulled down, despite -- in fact, because of -- their thriving business.  Lighthearted Lucio is appalled to find that Claudio, a young gentleman, is under arrest and on his way to jail for having gotten Julietta his beloved with child without sanction of marriage.  Angelo is unyielding: the law specifies death for the offense, regardless of any excuses or extenuating circumstances.  Lucio turns to Claudio's sister Isabella, a novice in the convent, and persuades her to beg Angelo to spare Claudio's life.

No one else could be as appealing as the virginal Isabella.  She does move the Duke's harsh deputy -- but to her dismay, it's not toward an act of public mercy but toward the dark side of his initially tenative but then increasingly insistent offer of a trade: her virginity, in secret, in exchange for her brother's life.

Shakespeare dwells upon human fallibility in Measure for Measure.  In law, in religion, in dealings with one another in society generally, we are urged and constrained to ethical behavior even though our weaknesses are legion.  Angelo the zealous executor of the laws falls immediately prey to temptation; worse still, he resorts to prevarication, making promises that he has no intention of keeping.  Isabella is trapped between the corporal purity imposed by her order and the pressure to seek to spare her brother's life with the forbidden sin of yielding her body.  Claudio, the acknowledged and to some degree repentant condemned sinner, is equally torn and tormented; he pleads, apparently in vain, for his sister Isabella to yield to the abuser of power.

And central to all this is Duke Vincentio himself, whose long neglect of the law and flight from responsibility have brought about these conflicts.  One central question in staging Measure for Measureis how to portray Vincentio as he disguises himself as a holy friar and dabbles around the edges of this developing catastrophe.  Is he the most reprehensible of them all?  Or is he instead a thoughtful ruler who's engineering all of this to teach everyone a lesson about law and mercy, guilt and responsibility, temptation and absolution? 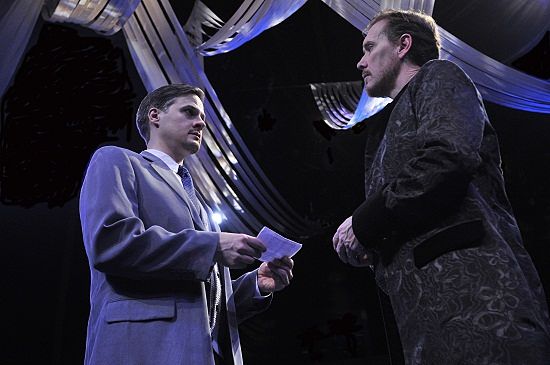 Polgar's answer in conjunction with Equity guest artist Greg Holt in the role of Vincentio appears to be that the well-meaning Duke had absolutely no clue about life outside the palace.  Holt makes Vicentio tenative, shambling, grimacing and perpetually astonished.  This Measure for Measure is more than anything else an education for the ruler.  At first Vincentio seems to be on something of a lark, disguising himself as a friar to get a taste of real life beyond the palace and his study.  He becomes father confessor both to Claudio and to Isabella, visibly groping for the appropriate behavior and ecclesiastical advice for these afflicted souls.  Eventually he does take action, perhaps for the first time in his rule, setting a deception and a trap for his twisted deputy.

Jeremy Lee Cudd, UT instructor and also an invited Equity cast member, gives deputy Angelo an appropriate rigid and cerebral approach.  He constrains his emotions; more difficult still, he signals to us that he is constraining them, even as his lust is destroying his principles, his self-regard, and, when all is said and done, his soul.

David Stahl's Escalus is a bearded, concerned old duffer unable or unwilling to stand up to the gleaming edge of Angelo's decisiveness.

Those three are fine and capable professionals, but I was left with the feeling that there was entirely too little room for St. Ed's undergraduate talent in the production.  Tyler Mount was welcome as Pompey Bum the tapster, but his Pompey was diffident instead of arrogant, even though Pompey's objections to Angelo's absolutism carry some of the moral message of the play. Curtis Allmon was a credible "fantastic" as Lucio, but the odd costuming choices for him suggested a second banana in a 1930s vaudeville routine; Lucio's lies to the disguised Duke were rendered more as a comic routine than the moral failings that they might have been.  Jon Richardson as the malapropistic Constable Elbow delivered a fine fury of self-righteous expostulation, but once again, the early twentieth-century policeman's uniform evoked the comic stage.  Costumes by Buffy Manners mixed the contemporary and the ancient. Several of these intermediate interview scenes before Angelo and Escalus were played with relatively static blocking, so that audience members in the western seats with me in this 'theatre in a square' had to wait a long time to see the faces of those before the examiners.

Matt Buzonas as the condemned Claudio seems not quite to understand the enormity of the pronounced judgment.  Hannah Marie Fonder has the comely face and astonished eyes of innocence, entirely appropriate for novice Isabella.  Her performance was tempered and careful; one sensed her adamant rejection of the moral dilemmas but her emotions were often distant.  In the final scene, Vincentio springs upon her an unexpected proposal of marriage, so gauche as to be almost cruel.  Shakespeare gives Isabella no considered reply to this, and every Measure for Measure must decide how to deal with this temporal ruler's abrupt infringement of devotions sworn to the church.  Fonder's response, a sweet bewilderment, is in keeping with the overall quietly comic interpretation of the piece -- is this Vincentio aware, even after all that has occurred, of the enormity of the effect of his actions now that he at last has grasped the levers of power?

This production provokes and amuses, mixing more than a spoonful of sugar with the gall.  It offers no easy answers, nor should it, for who among us might not potentially be found wanting?

A necessary post script:  Lisa Laratta's design for this open acting space was striking in its simplicity, as is evident in the production pictures by Bret Brookshire.  High above the central space arches of crepe paper defined vaults and arches suggestive of church and cloister spaces.  Unfortunately, the tensile strength of the material appeared insufficient on opening night.  A lengthy scrap of paper fluttered down early on and lay in the playing space, studiously ignored by the actors.  As the evening progressed, other scraps floated down and various of the paper sweeps detached themselves.  For a time, the space reminded one more of the men's room at a bus station than a palace, prison or cloister in Vienna.

Review by Jillian Owens in the Austin Chronicle, February 21 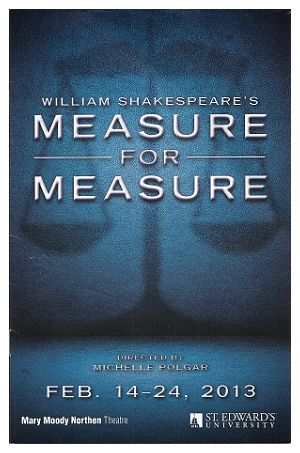