Different Stages' production of Mauritius is a crackerjack film noir, up close, live and in color. Although there are three playing areas cursorily defined by Ann Marie Gordon's set on the City Theatre stage and the director chooses at times to leave two of them inhabited, the impression created by the clash of competing interests is that it's all taking place in one room.

Perhaps in the claustrophobic room of the mind, for these characters are trapped deep within themselves. The imagined escape for each of them lies through Mauritius.  Not the tranquil island in the Indian Ocean caressed by sea breezes and sought out by European tourists, but a couple of postage stamps from early in its colonial history so rare as to be worth millions of dollars.

The stamps are the MacGuffin, in Hitchcockian terminology, the coveted object that sparks the action. In themselves they're just a couple of pretty scraps of paper.

History doesn't much matter in Rebeck's urgent plot.  Her characters with their insistent dialogue keep you very much in the present. Despite a couple of half promises, we never do hear much about the events that broke up this family and left the younger sister Jackie (Melissa Vogt) to care for her impoverished mother, who has just died.  We don't really know what alienated her significantly older sister Mary (Jean Budney), who at sixteen decided never to come back.  Jackie is desperate, an impression reinforced by the stacks of unpaid bills that in the course of the action will eventually litter the living room floor.  Mary is despicably self-satisfied, taking her revenge by deliberately arriving too late for a deathbed reconciliation.  The slim album of postage stamps that moves from hand to hand and back again was put together by their rich grandfather, and it's not clear which sister has a better claim on it.

Jackie's effort to determine the value of the stamps and to market them puts her into contact with a couple of shady characters, one an irascible stamp expert named Philip (Craig Kanne) and the other the smooth-talking con man Dennis (Matthew Patterson) hanging out in Philip's shop.  Again, the playwright doesn't explain this pair, why they're together at just that moment or ever.  Their respective reactions to Jackie, clutching her album of stamps, buffet her with the confusing immediacy of rebounds across the table of a pinball machine.

Desperation and covetise make the negotiation of a sale of those colorful bits of paper a lengthy, thrilling process.  Especially once we see the prospective client with Dennis in a coffee shop.  Barry Pineo is Sterling the entirely shady 'businessman.' He has an air of barely contained hysterical menace and an unreasoning infatuation for the grail represented by those stamps.  Dennis's courting and convincing of Sterling has all the incipient violence of a Spanish bullfight. The deal itself, set up with the precautions and paranoia of a huge drug deal, is a virtuoso piece of acting and staging. Pineo gives us a bad guy who's rigidly contained and visibly mad, and he subtly makes the most of Sterling's articulate presentation to Jackie of his offer.  This is a seduction, on both sides, and director D'Arcy allows Vogt and Pineo to take their time with it; the stage fairly thrums with tension during the long minute that Vogt meticulously counts the bills in a bundle of cash  and Sterling paces the stage, a hungry tiger scenting prey.

Rebeck's plot is neatly engineered with satisfying surprises and reverses worthy of any classic film noir. If there's a shortcoming, it arises from the necessarily tentative nature of trust between and among these characters.  All are living in the present, offering not much place for anchoring. Jackie does eventually elect to trust someone, but we as an audience don't see her make that choice.

We just have to put our own trust in that last impressive moment of prestidigitation.

Click to view the Different Stages program for Mauritius 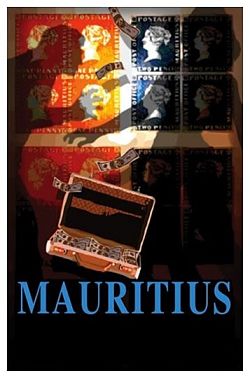