A Commentative Search for Truths
I ended up parking two blocks away by accident and only once had to stop and ask for directions to the Grayduck Gallery [click for map]. I was really excited to watch the premiere of Make-Believe, a new work by Chris Fontanes of Bottle Alley Theatre Company. I'd received an early version of the full length play from Chris a couple of months earlier, so I'd gotten an actresses's inside view of the work early on.
Described as 'an experiential theatrical piece' and 'an abstract narrative of... all the things you wish you remembered,' the new work was everything I expected: a frank depiction of abstract ideas, using theatrical staging conventions and interesting choices in characterization.
The dreamlike hospital setting was close before us in a contemporary art gallery. The white walls and simple set consisting of two beds and nightstand cleared the air so an audience member could  interact thoughtfully with the action and dialogue. We were allowed to form opinions about the piece as we watched it and to respond to the play in a direct and unforced fashion. The gallery and the setting were suited to the experience of new theatre work.
Experiencing Make-Believe was like watching a painter fresco a wall in lime plaster. Tension mounted as the plot was slowly revealed. Neither the protagonist nor the audience benefited from the omniscient viewpoint of realism or natualistic theatre.  The playwright revealed information simultaneously to the central character and to the audience, filling in the characters and the events surrounding them. Only at the end of the play were all the loose threads woven back into the plot to produce a neat, concise, engaging pattern.
Questions arose throughout the play and kept both the audience and the nameless central character guessing. We were asked repeatedly what to think about love, friendship, morality, and societal roles. Subplots and minor themes emerged from the interplay of these four embracing ideas. We experienced all the other characters through the eyes of Nameless.
We wanted to know a great deal.  How did all the characters end up in a hospital?  Why did certain things happen to particular characters? What roles did each of them have in the life of Nameless? Who was  - or is - responsible?  Near the end of the play, I roused myself for a moment and noticed everyone in the room completely dedicated to the events on stage, mesmerised in the hypnotic 'Make-Believe' world of Nameless, eventually explained in the closing scenes.

I have two technical notes for the production. One takes exception to a spider character who eats human food (flies do this, not spiders). Second, and possibly more controversial, is the playwright's choice not to address the issue of involuntary manslaughter. If an accident involves fatalities, chances are the authorities will be obliged at least to attempt to identify the person at fault. But I understand this new work was abstract, with focus was placed elsewhere in the play.

Moving, at times humorous, and intriguing, Make-Believe by Chris Fontanes dealt with important questions about reality, life, and extreme circumstances. It was  nice closing to Bottle Alley's first season of plays. 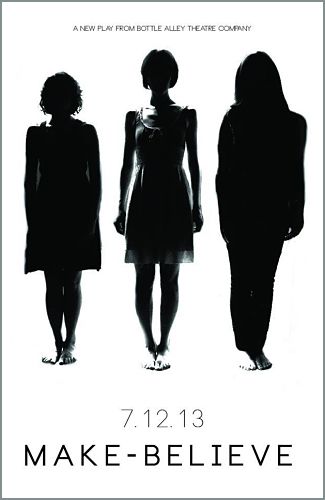