Information is not knowledge.  Even less is it wisdom.  And in our popular consciousness, increasingly fragmented by the synapse-candy of sound bites, blurbs, ads, Tweets and Facebook postings, random information thrown at us typically constitutes an accumulation of meaningless trivia.

I went looking for an author's statement or a thoughtful analysis of Caryl Churchill's 2012 play Love and Information, staged in the United States for the first time in February of this year, but I found only theatre reviews. But I don't read others' reviews before seeking to articulate my own reactions. David Long, director of this piece at the Mary Moody Northen Theatre at St. Ed's, had not a thought to share in the program.  Long has a history of impish choices for the MMNT season, and Churchill's piece fits right in.

The gathering audience is subjected to a relentless succession of 'Jeopardy' style Qs&As on screens mounted high in the corners of the theatre.  You might scorn such trivial pursuit, but as you wait for the piece to begin, you can't help searching for the answers, even though no buzzer is at hand.  The video challenges accelerate and appear to implode.  The young masked cast appears and prances through a strange, intentionally odd circle dance with luminescent hula hoops and streamers, choreographed by Danny Herman and Rocker Verastique.  What does it mean?  Intentionally, nothing. 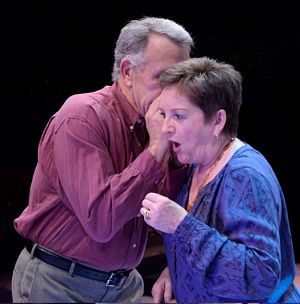 Guest artists from Actors Equity Rick Roemer and Janelle Buchanan play the first of the more than 50 super-short scenes, a tug of wills.  The man refuses to share a secret; the woman cajoles, pouts, persuades.  He gives in.  We never learn the secret.

And so it goes, completely unpredictably, scenes dealt down and played in rapid succession, so many and so fast that one is hard pressed to recall them.  Jesus asking Joan of Arc just what she heard when God was talking to her; two men in suits robbing a homeless man of his pet rock and then stoning him; a middle-aged couple apparently winding up a one-night stand years after their first meeting; a couple in a coffee shop wondering whether they're about to become more involved; courting, rejection, rejoicing; the pathetic spectacle of a wheelchair-bound man mourning his wife, who's standing right in front of him.

With a theme of sorts but no story line, Churchill's work defies us.  She's suggesting the multiplicity of experience, the variety of human emotion, our persistent failures to understand one another, the trivial nature both of our lives and of the moments that seem so important to us.  Love and Information masquerades as a playful diversion, but it seems deeply pessimistic to me.  Was this dizzying succession of scenes the fruit of a workshop experience, the way Cloud 9 was?  Or does this aggressive mortaring of the audience come exclusively from the author?  There's a doomed banquet of food for thought in this piece, but it begs for repeated viewing.  Attending a single performance sends one out the theatre door with stomach growling, figuratively clutching a couple of canapés and dabbing at a smear of mayonnaise on the upper lip. 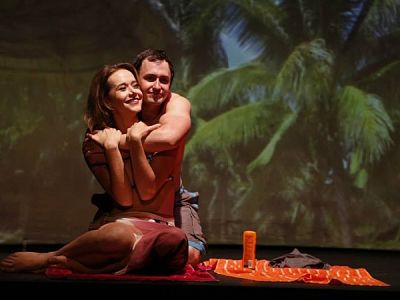 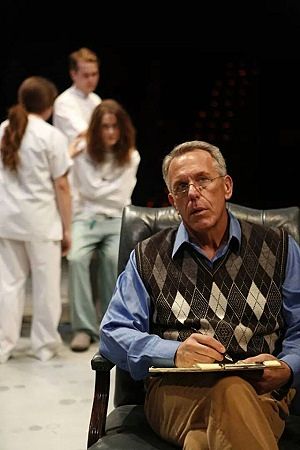 Churchill, a pre-baby-boomer born in 1938, has long been provocative and a rebel against conventional narration.  In this piece she abandons entirely the narrative consciousness so comforting to those of us shaped before the advent of the Internet and the flood of information.  In the process, she tosses overboard our quaint notions of story-telling, emotional attachment, compassion and fidelity. This is a bleak world, lit with strobe flashes.

Those who stood to benefit most from the very intellectual content of this piece were the twelve St. Ed's undergraduates in the piece.  They'd lived with these glimpses, seen and heard them dozens of times in rehearsal and performance.  Without a story to guide us, we in the audience wanted to reach out and identify with the actors -- but we couldn't link faces with the dozen names listed in alphabetical order beneath Buchanan and Roemer, the invited Equity artists.  So who was the blonde in the swing?  The thoughtful young woman in the coffee shop, the slim young man accompanying her?  The taller, somewhat bewildered looking young man?  The guys in suits who chased off the homeless man?  The woman in the straitjacket? Jesus, Joan of Arc?  The others?

In an artificial world brimming with information, those were pieces of data we didn't have.  And for those of us with the habit of following the faces though the successive theatre seasons at St. Ed's, engaging emotionally with the fictitious characters and those who inhabit them, that fact was a sharp and unforgiving reminder of how different their millenial perceptions must be. 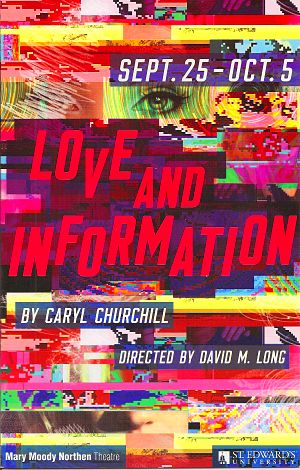 St. Edward's University is home to one of the finest Theater Arts programs in the region and one of the nation's few undergraduate-only programs incorporating a full season under the …