Gemma Wilcox is a lively and inventive woman with a serious case of multiple comic personalities. Her two-act show Leela's Wheel runs about an hour and you never know who (or what) she's going to be next.

This piece is dialogue-based, almost never in monologue style. One accepts fairly quickly her theatre convention of transferring instantly from one character to another by shift of position, body English, voice and accent. The impression is a bit like quick-cutting in film. Gemma is so good at this that she can give us a middle-aged woman seducing her crofter husband and make us believe in both partners at the same time. And laugh uneasily at the intense eroticism of it.

The most powerful comedy teeters precariously on the edge of desperation. She does a metaphorical dance on that edge, and sometimes a literal one as well. Gemma embodies both sides of at least four pairs: a young couple living together in the first part and then as young marrieds in the second; the rural aunt and uncle of the girl; the young wife unexpectedly spending an evening of drinking with a boyfriend who dumped her ten years earlier; and the sleek, urbane, mendacious cat with the aristocratic name and the industriously churning little hamster Leela.

Gemma's got a gift for unexpected animations, as well -- illustrated by her metamorphosis into a peacock (a fabulous bit of mime, with exceptional control and timing) and into the flame leaping in the fireplace.

Hers is a precisely written, timed and choreographed comic piece, strongly supported by the unseen tech partner running the lights. I had the impression that she'd worked a long time to mine this story and to get it just right. And she did. 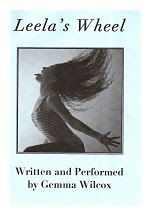