Review: It's A Wonderful Life, a Live Radio Play by Penfold Theatre Company
by Michael Meigs

This is a warm, simple entertainment for the chill of the holiday season -- and it was so chilly in the Old Settler's Park in Round Rock last week that park employees had turned off the water at Rice's Crossing Store to prevent damage to the pipes.  Penfold folk, using that recreation of a village gathering place for their third annual staging of Joe Landry's adaptation of the 1946 Frank Capra film with Jimmy Stewart, had the right phone numbers to get the bathrooms working again by the intermission in this ninety-minute staging.

Hot cider and cookies are available to help against the chill, but the real warmth is provided by the evident enjoyment of the five-person cast as they bring to life the story that helped affirm hometown values and American identity after the dark years of World War II.  Grovers Corners is really Anytown, U.S.A.; George Bailey is the hometown boy who yearned for broader horizons but found himself bound by family and community obligations.  Clarence Oddbody, Angel Second Class, who has been trying to qualify for his wings for the past two hundred years, is a sort of George Bailey of the heavenly spheres.  The Powers Above set Clarence the task of bringing George through his darkest hour when the wily Mr. Potter, Scrooge-like as they come, is intent on driving our hero and his family savings and loan out of business and, perhaps, entirely out of existence. 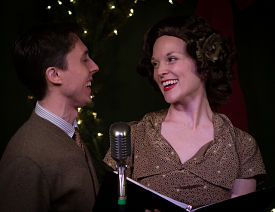 Capra didn't imagine that the film would be linked to the holidays.  It lost in all its Oscar nominations to the post-war story The Best Years of Our Lives, except that for Technical Achievement (for making non-crunchy snow).  In the 1970s CBS began showing it at the Christmas season, and the tradition was established.  This radio play version by Joe Landry is one of the most popular scripts in American community theatre.  Like Penfold, the Classic Theatre of San Antonio is making it an annual presentation.  The Bastrop Opera House, Austin Playhouse and Gaslight Baker Theatre in Lockhart have all done it in recent years.

Surely you've seen the motion picture.  If not, you can borrow the DVD from Netflix or purchase a streaming version from Amazon.com, or just watch it in HD for free on YouTube.  Or maybe visit the Zach Theatre this month to appreciate the one-man version being enacted by Martin Burke, one of Austin's favorites. 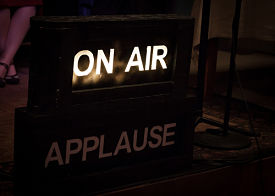 What you won't get from any of those versions, however, is the opportunity to time travel.  Landry's reworking of the familiar story puts you into the audience for a radio theatre version in the 1940's.  You're cordially invited to respond to the APPLAUSE sign, you'll watch the creation of those ingenious radio sound effects, and -- most of all -- you'll be engaged by the deft ballet before the big old microphones established by director Emily Rankin for these very capable actors   Each carries a bulky binder with the script.  That's largely to complete the illusion, for they all certainly know their lines by heart.

In the familiar theatrical suspension of disbelief we in the audience have a contract with the actors: we will pretend that they are, indeed, the characters they are presenting.  There's one additional wrinkle in a live radio play: we are pretending that the actors before us are the actors in the studio who are creating the characters only with their voices. 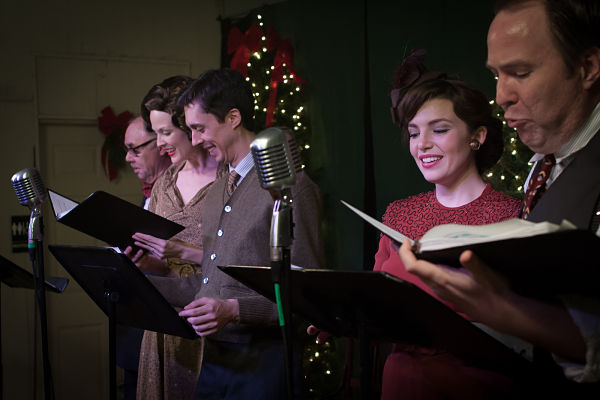 Landry's script and Penfold's staging of it don't stress that extra touch of complexity -- unlike, for example, the 1940s Radio Hour of Walton Jones, done in recent years by the Wimberley Players and by the Austin Community College chorus.  Jones sets up a musical-comedy story throughline that gives the radio actors back stories, encounters and resolutions.  That doesn't happen here.  But you can, if you like, pretend that Ryan Crowder is Jimmy Stewart delivering his lines in the 1947 Lux Radio Hour and Erin Barlow is Donna Reed reprising the role of his sweetheart and wife. 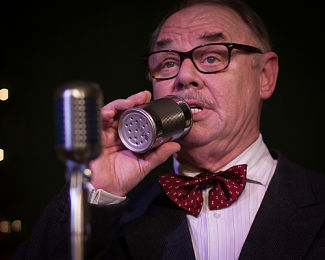 David R. Jarrott, that mellow-voiced and mustachioed actor and announcer, doesn't much resemble Lionel Barrymore, but then perhaps by 1947  Mr. B had been called away to some other major engagement.

Costumes by Glenda Barnes are thoroughly late 1940's; some touches are exquisite, such as Julia Lorenz Olsen's red ensemble with the feathered hat and Jarrott's jaunty bowtie.  Crowder wears a sweater vest, of course.

The radio ads, complete with jingles, are almost as entertaining as the story.  Austin Steam Train and Oneok the Texas gas service get glowing and memorable presentations.

Crowder, Penfold's producing artistic director, portrays George Bailey this year for the second time.  He has an appealing presence, all the more because he's endowing the character with more Crowder and less Jimmy Stewart.  He is relaxed, concerned and vulnerable -- an all around Good Guy, just as George Bailey is, without realizing it.

Jarrott, anchoring this fable for the third time, is the very picture and presence of a benevolent small town Rotarian when he's not stiffening face and voice to channel the wicked Mr. Potter. 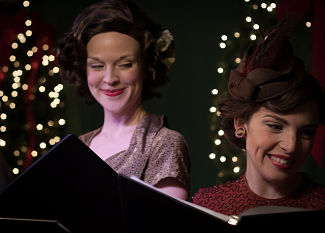 Both of the actresses have the requisite amount of twinkle -- Erin Barlow as Mary and Julia Lorenz Olsen as a gallery of female characters ranging from the heedless Violet to sweet stuffy-nosed daughter Zuzu to the suspicious and none too honest bank examiner.  Some of the most amusing moments are the crowd scenes where everyone behind the microphones is exclaiming and expostulating (doing Bailey's four children, the three multi-role actors in the cast are kept extremely busy).

Robert Berry is just as versatile as his predecessors in the role of hopeful, befuddled angel Clarence Oddbody and an assortment of others.  He and Jarrott populate Grovers' Corners with the stock characters of this all American commedia, establishing the basis for the eventual spontaneous outpouring of support and contents of piggybanks that confound the plots of the avaricious Potter.

Not everyone appreciated the film when it first came out.  Some dismissed it as overly sentimental and simplistic (but, then, what fable isn't?).  Others objected to the villainizing of Potter the businessman/capitalist (Wikipedia transcribes comments to the FBI from some long-ago name-redacted source who saw the hand of communism at work).  One writer shuddered at the dark and hopeless world depicted when Clarence suggests to George Bailey what might have been if George had never existed.

Leave that all to the intellectualizers.  Penfold's It's A Wonderful Life amply justifies its title.  This production is an entertaining, reassuring and lively enactment, set in a simpler time.  It's just the right tonic for the overdramatized complexities of our present day.

I'll be going back to see again, and I'll bring my extended family with me -- from the venerable, quietly witty family patriarch who's an exact contemporary of George Bailey to our offspring who are approximately the ages of the leading actor and actress in this company.  Won't you join us? 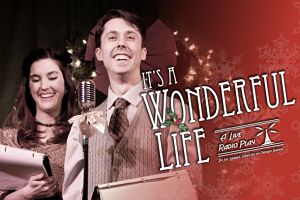