Billed as “a dark comedy about the dark ages,” Incorruptible seemed sure to be some amalgam of Mel Brooks’ History of the World Part I and Umberto Eco’s The Name of the Rose. But the latest production at the Gaslight-Baker Theater in Lockhart is neither nonsensical nor ominous. This nimble prodution is delightful. And improbable, set far from our modern reality yet landing right where we live.

Incorruptible by Michael Hollinger is a bawdy satire exploring the disconnect between spiritual purity and survival. It’s the second of Hollinger’s plays produced at the Gaslight-Baker, following last season’s An Empty Plate in the Café du Grand Boeuf, both directed with dexterity by Robyn Gammill. The play irreverently explores the skill with which humans can twist their ethical systems to accommodate the pressing needs of the moment. In this case, the need is to fill the empty coffers of the Monastery of Priseaux in 1250 A.D. France.  Faced with a brisk trade in real and counterfeit bones of the saints and the temptation of easy money from pilgrims willing to pay for a chance to pray to a sacred femur or collarbone, the brothers of Priseaux must confront the ultimate spiritual challenge.

Director Gammill doesn’t get bogged down in any rigid commitment to the literal setting, instead letting the actors bring their own modern authenticity to the faux-formal language. The action takes place in the beautifully rendered stone chamber of the monastery. All technical aspects -- lighting, sound design and costumes -- are equally effective in telling their parts of the story. 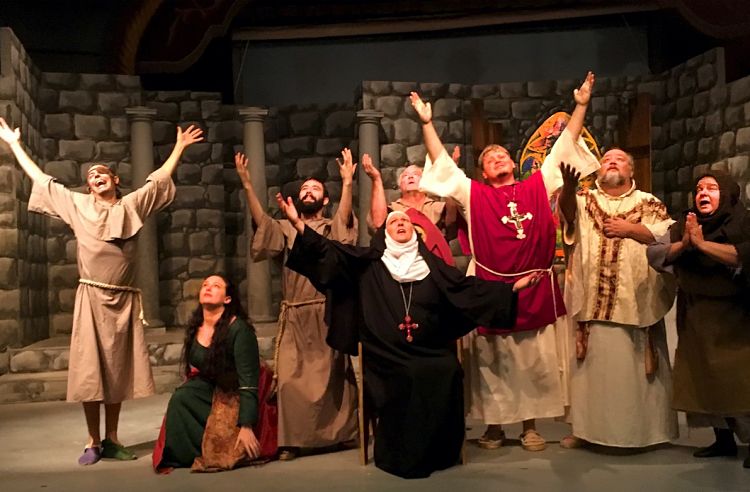 The ensemble cast rollicks through a varied landscape of humor, from sharp social satire to flatulence. Gammill and the cast ensure that each character is distinct, clear in hopes and needs. James Springer crackles with acid wit as Brother Martin, an over-stressed middle-manager and the voice of pragmatism in the face of the brothers’ woes. As the Abbot, A. Jason Jones is the moral compass who loses true north –- or maybe finds it –- and makes high-flown spiritual crisis entirely human and humble. Where’s the sin in creating good works out of bad? What does it really mean to find favor in God’s eyes? The brothers of the order are a rich foil to the grasping peasant woman played with gleeful bawdiness by Lori Z. Cordova.

Michael Dalmon’s Jack the One-Eyed Minstrel bursts onto the stage in a circus of tightly-wound mania, and the charged sparring with his “wife of sorts,” the sparkling Rory Roberts, is one of the sweeter pleasures of the play. The role of Jack could easily be interpreted as witty Bugs Bunny slapstick, but Dalmon allows Jack’s clown mask to slip. We glimpse his disillusioned heart looking for a reason to believe in miracles.

I’m hoping the cast will continue to deepen their commitment to the final epiphany, which demands that they –- and we –- let go of modern cynicism. Equal parts satire and soul, Incorruptible will renew your faith in the transformative power of theater. And belly laughs.

This review is also scheduled for publication in this week's Lockhart Post-Register.

Incorruptible runs through October 22 at the Gaslight-Baker Theater, 216 S. Main St, in Lockhart, Texas. Performances are Fridays and Saturdays at 8 p.m., with 2 p.m. matinee performances on Sunday the 9th and Saturday the 15th.  Seating is general admission, $15, $12 for seniors, and $7 for students. More information can be found at www.mygbt.org.

Fridays and Saturdays at 8 p.m. 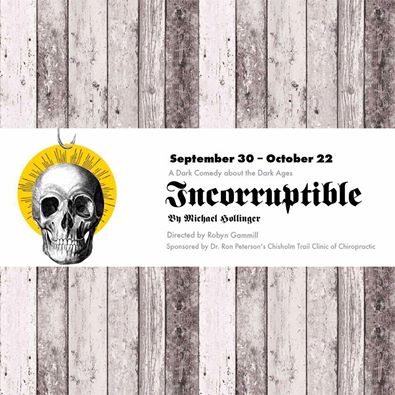