Review: Iced Tea in Texas by FronteraFest
by Michael Meigs

I'm no exception. Checking the files, I find that I positively gushed when I reviewed installment no. 2, Dinner in Dubai in 2012.  I missed the opener Tea in Tripoli in July 2011, but I have some vague hope that one of these days she'll provide us all a four-pack, perhaps on successive evenings serving tea in Tripoli, dinner in Dubai, iced tea in Texas and Real Ale in Austin.

Autobiography can be risky business.  Many a stand-up comedian takes the smartass route of telling the audience in scornful detail of all that's stood in his way up to now, implying that if he were King of the Forest, things would have been plenty different.  The focus is on I, me, my and mine, and it's rare that the portrait drawn in brash lines is anything but crass.

The sketch of the artist that emerges from Bernadette Naon's whimsical stories is delicately shaded.  She's wide-eyed, definitely with her head tilted to one side and an inquisitive expression on her face. Often as not, she teases herself.

The shape of the narrative to date is that of a Bildungsroman:  a young Englishwoman with a naive sense of adventure accepts job offers from Brit firms overseas, first in Gadaffi's Tripoli and  later in the sheikhs' playground Dubai in the United Arab Emirates, just about the time of the war in the Persian Gulf.  After all that she went back home to England, packed up or sold her possessions and set out for Hollywood to become an actress.

She stopped over in Austin for a week in 1992 and hasn't really departed since then.

The world's a wide and wonderful place in Bernie's eyes and in her writing.  With her Middle East experience, she thought herself thoroughly immune to culture shock.  In this account she mirrors to us stereotypes and images of Texas and the surprises that awaited her. Guns; cowboy hats; the warmth of her host family and the unnerving surprises of Texas cuisine; American Thanksgiving and Christmas; Texan fascination with her English accent; a brief career of dog-sitting; a 'blue norther' cold front that coincided with a severe bout of influenza; and the discovery of informal classes available at the University of Texas.

Nason took acting classes under an tactfully unnamed 'guru' and measured herself uncertainly against other participants.  One message: self-confidence is all!  Look into that mirror and tell yourself, "I am an actress!"

This installment leaves Bernie with another good twenty years of tales yet to tell, including her adventures in acting, her association with Austin Playhouse since 2002, and a realm of personal history that I suspect will be glossed over.

Bernie's admirers don't need to know too much, because they're regularly charmed by the characters she inhabits on the stage and in her storytelling (including her one-woman Christmas Carol in 2012 and 2013).  Her light touch, her twinkle and those mobile, expressive features will keep us coming back for as long as she lingers here in Austin before setting out for Hollywood. 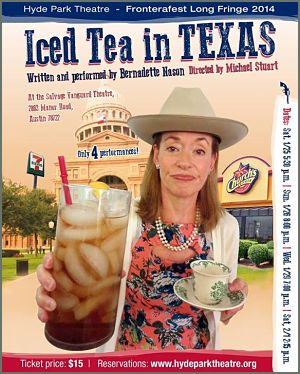