I rarely stand to applaud at curtain calls, but even a theatre reviewer's scrupulous neutrality can be overwhelmed. Last Saturday when Nina Bryant who plays the protagonist of Good People stepped out to cap the actors' acknowledgements, I surged to my feet. Her creation of Margie the scrappy little Southie mutt of an abandoned wife was sharp edges and soft center, a woman hiding psychological bruises behind dogged let's-get-through-this-one-day optimism.

You are sitting in the structure on Old Kyle Road for the evening, but with the art of this piece, both acting and tech,Texas evaporates within minutes. Of course, David Lindsay-Abaire's script is terrifically atsmospheric, text with subtext that presents pictures and whole histories inside your head. The language is authentic, leavened with coarse comments and quick put-downs. Director Laura Haygood found the right good people for these roles and has orchestrated them deftly.

The striking turn in this play is that you embrace that gritty world in Act I, and in Act II the playwright sends Margie into the 'lace curtain Irish' world of the man who long ago was her teenage boyfriend, a tough who escaped from Southie and made something of himself. That 'something' is now rigid and uneasy, yes, and he is accomplished, but perhaps he's not that much better off.  Except for the fact that he and his family are now insulated with money. 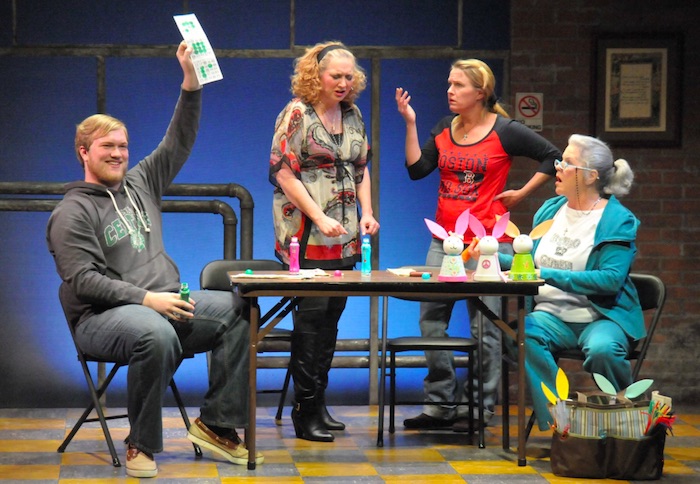 In the opening scene Margie fights to keep her job as cashier at the Dollar Store but manages only to make her supervisor Steve (Nate Nelson) uncomfortable. He can no longer make excuses to cover up the fact that Margie can't be relied upon, because of her need to care for her grown but severely handicapped daughter. Friend Jean (Whitney Marlett) and landlady Dottie (Carla Daws) hang out in Margie's kitchen offering useless advice and meaningless encouragement. They push her to approach Mikey, whom she hasn't seen for years. Her intrusion into the office where he's a pediatric endocrinologist is the sort of uncomfortable reunion you wouldn't wish on anyone. Mikey (David Young) is carefully neutral and non-commital. Almost every trace of his Southie origins has disappeared. Poking, prying, ball-bustng but then backing off, Margie discovers there's going to be a party at the doctor's house and brazens herself into an invitation.

Margie learns an enormous amount about Mikey and his wife Kate (Edwina Soto) when she turns up disinvited to a party that was cancelled. Kate is all hospitality and generosity until some grim memories and hard truths get forced out ito the open. Bryant is full of Margie's contradictory emotions, raw and tearing. Her grappling with the past and its collapsed possibilities is devastating.

Yet again the set design at the Wimberley Playhouse merits appreciative applause. I was a bit apprehensive at first sight of the two cell-like apartments separated by a wide and intrusive brick wall. In fact, the setback is sufficient so both spaces are clearly visible from anywhere in the house, and it turns out that the brick-like construction is even mobile. Those Southie spaces of Act I are smoothly whisked away behihd scrims and cleverly designed panels that transform the stage apron first into the stark physician's office and in Act II into a spacious and well-appointed suburban house. The bricks slip forward and become part of an imposing central fireplace.

Lindsay-Abaire spins this story of courage and pathos to remind us of the enormous role of chance in human lives. Classmates of Margie and Mikey have wound up dispersed, some in prison, some dead. Chance -- that is, the unpredictable -- is not the same as luck, as in the Bingo games in the church basement. Margie is held in Southie by the dutifully accepted chance burden of her daughter's incapacity. Mikey's good fortune may be attributable to the chance that his father happened to catch sight of him in time to prevent a crime, while the good luck of his prosperous career and his talented wife is brought into question by the taint of dissatisfaction and discord. Did Margie really sacrifice herself, knowingly or no, in order to give Mikey the freedom to esape Southie? If so, did it make any difference?

'Good people' is Boston dialect: 'He's good people.' These good people embody the courage and resilience of the hard-pressed little people of the American underclass. There but for the grace of God -- or perhaps, in this context, there but for the arbitrary distribution of talent, opportunity and resources -- go we all.

Please "Like" our main Facebook page at: www.facebook.com/wimberleyplayerswww.WimberleyPlayers.org for tickets and other info$19 adult, $12 students with ID 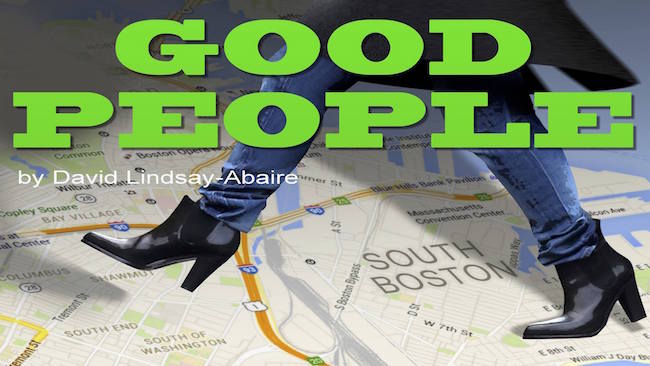