Medieval guilds and church clergy organized the mystery plays performed before cathedrals or in town pageants. The aim was devotional and pedagogical. Church services were conducted in impenetrable Latin, but festive costumes and drama of Bible stories vividly conveyed stories of the Old and New Testaments to populations that were devout but illiterate.

Of the three 'tribal' musicals of late mid-twentieth-century American theatre, the 1970 Godspell by John-Michael Tebelak and Stephen Schwartz is closest to that tradition. Hair in 1968 featured a shaggy bunch of lost idealists and a martyr self-sacrificed to his concept of duty, and the vigorously entertaining Jesus Christ Superstar was half opera(etta), half rock concert expanded from a concept LP. But Godspell arose from the people, in a manner of speaking, and it has flourished among the people in schools and community theatres over the past 45 years. 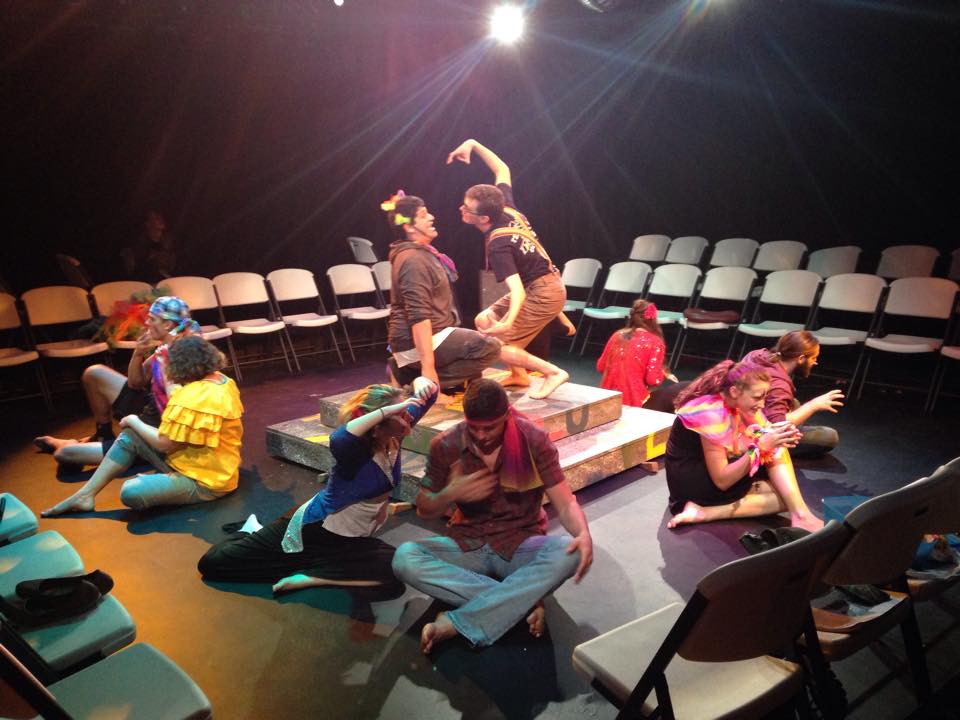 Godspell was Tebelak's  master's thesis project at Carnegie-Mellon University. Under the influence of theologian Harvey Cox (Feast of Fools) and in reaction to the joylessness of an Easter celebration, he sought to infuse more celebration into the telling of the Gospels. Tebelak drew principally upon the parables of Jesus, and the original stagings used music with lyrics adapted from the Episcopal Hymnal. The cast of the university production was drawn from the CMU Music Department. Tebelak secured a two-week engagement at the off-off-Broadway Cafe La Mama in New York that brought the work to the attention of producers who secured the rights and hired Schwartz to write new music.

In effect, Godspell was partly devised theatre at its origins, just as were the medieval mystery plays. It draws upon Scripture, as they did, and the original ensemble shaped characterizations. Most of those in the La Mama cast, non-professionals to that point, transferred to the off-Broadway Cherry Lane Theatre. 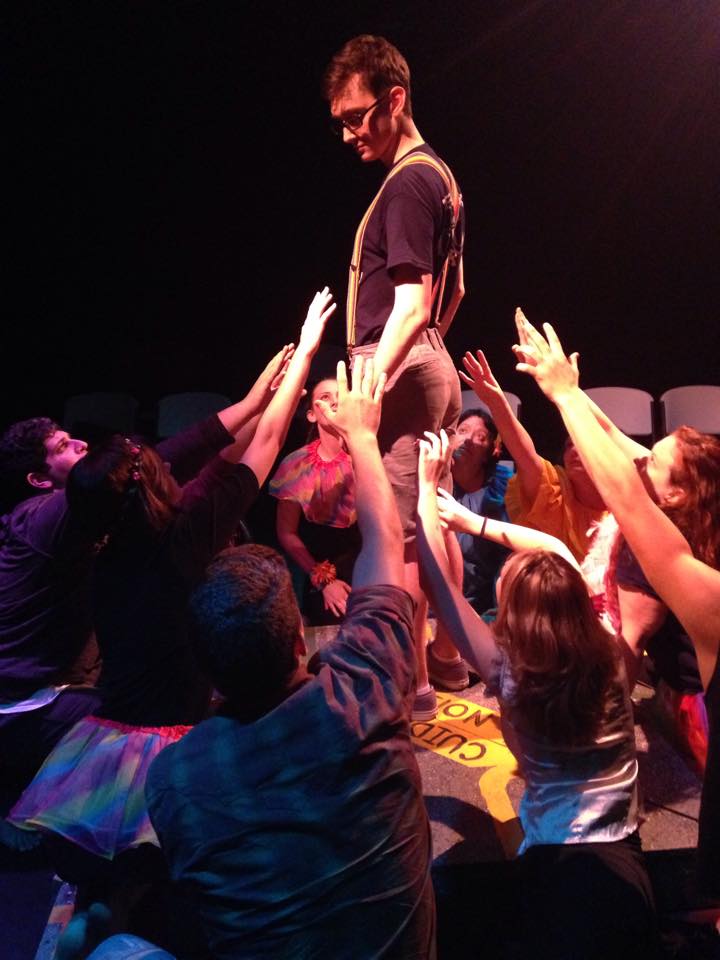 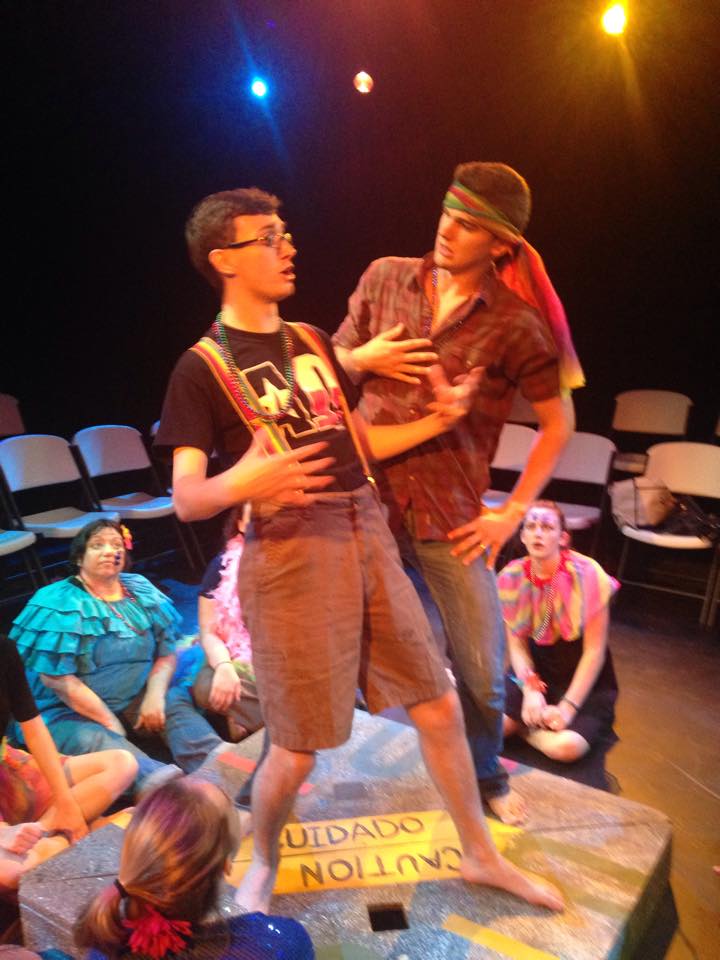 The cast of the Emily-Ann Theatre production of Godspell is similar in many ways. In a play that's more about community than theology, they're vigorous young persons drawn from the Wimberley area community. Bridget Farias Gates's staging in the Burdine Johnson black box theatre puts them into a 75-seat close enclosure of community as well. The vigorous movement charted by Gates and the energetic choreography by Melissa May Moncus surges across the square playing space. If you're in the first row you shouldn't be surprised to find your knees brushed in passing or, in the second act, your lap loaned by Rory Roberts in her hot-mama rendition of Turn Back, O Man.

If you're not a member of the Wimberley community, you'll feel like one by the end of the second act. As in most high-energy small-cast musicals, you may not know individual cast members at the start, but you'll feel that you do by the finale. Only two  are identified by assigned character roles: cheery bespectacled Jack Rogers as Jesus the parable-teller and Jensen Collie in the dual roles of John the Baptist in Act I and Judas in Act II. Rogers has a nerdy eloquence; Collie's physicality, agility and intensity project both leadership and charisma. The playing space for Godspell is defined by a set of low triangular stackable units, so there's no floor covering. if there had been a rug, the two would have torn it up with their wild duo-within-an-ensemble celebration of All for the Best, choreographed by Moncus.

The collected Gospels determine the shape of Godspell. The title's from old Anglo-Saxon 'god-spel' meaning 'good story' or 'good news', with perhaps a wink at German/Scandinavian 'Spiel'/'Spel' meaning 'game' or 'play.' If you went to Sunday school, you'll recognize most of what's recounted and enacted here. Rogers as Jesus appears, accepts baptism, and recruits the members of the cast, marking each as his own with a dab of face paint. He entertains them with parables taken pretty much straight from the Bible, and the cast acts out those stories. There's great joyfulness to the proceeding.

A couple of Biblical accounts are oddly presented. Jesus emphasizes in the Garden of Gethsemane that 'all' of them will deny him three times, and the Devil's temptation of Jesus comes near the finale instead of at the start of his ministry. Still, the bounding energy of the cast rises throughout and carries the audience along. The culmination of Jesus's earthly story, the crucifixion, occurs in the last moments, but the lifeless body carried out one corner entrance high overhead returns within seconds for a vibrantly responsive curtain call by Rogers and all of the cast. 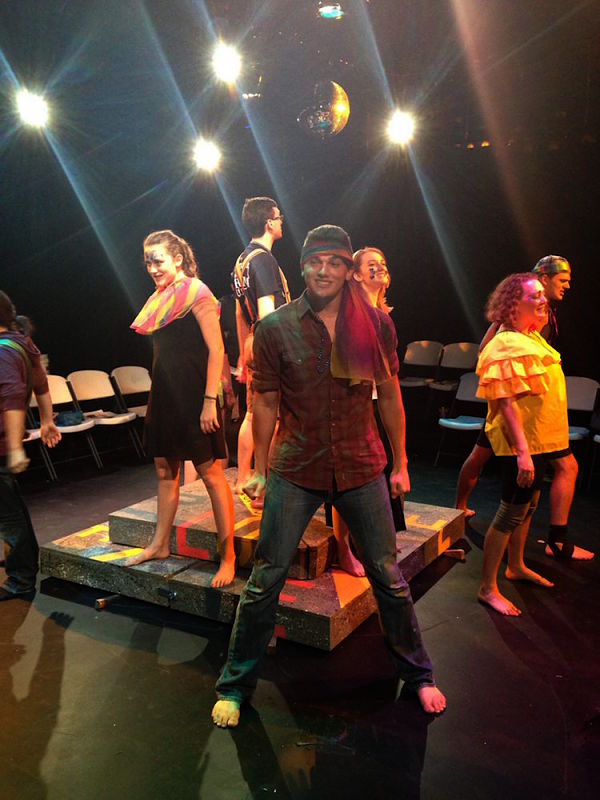 These are lusty young voices with no need of amplification. In some of the songs and repartee certain members of the ensemble weren't quite distinct or precise in their articulation.  I found the level of recorded music a bit too high, especially for those of us unfamiliar with most of the music and seated closest to the tech booth.

Schwartz's music I found mostly unimpressive, except for the familiar Day by Day, a simple number that went high on the pop charts back in its day. Melissa May Moncus delivers it with impressive power and feeling. Other than that number I didn't go away humming any of the melodies. Perhaps a closer listening to a cast recording might raise my estimate of the music.

Godspell is a playfully optimistic presentation of the story of the communities inspired by the teachings of Jesus. In our contemporary, secularizing and increasingly unchurched age, it delivers the sweetness of the moral message without unpalatable preachiness. Director Gates and choreographer Moncus empower an attractive and capable cast who are happy to do just that.