Inevitably, Manuel Zarate's one-act play Four Squarereminds one of Edward Albee's The Zoo Story.  There's a chance encounter in a public place with no one else around.  A chat between two strangers starts with simple exchanges, courtesies, really, then progresses until we eventually see that one of them is a psychotic and the other is a victim.  There's something of the bull ring to the concept, except that instead of the ceremonial squads to do the tormenting, there's only the psycho.  And the shape is different: the playing space is defined by a chalk square scrupulously marked into quadrants.  The two are chained together by circumstances -- metaphorically at first and then in an unexpected development, literally.

Albee's story is simple, a searing descending arc; Zarate's is considerably more complex.  The victim in this story is a woman, Beverly -- hesitant, with a slight speech impediment and a mild physical handicap.  Ann Catherine Pittman in that role initially seems to resemble a bird with a broken wing but as the story develops she proves capable of anger, stubbornness  and effective resistance.  J. Ben Wolfe is David, who says that he's waiting for a bus so he can visit his wife and daughter.  It never comes and he was probably not waiting for it in the first place.  Late in the action in a flash of insight unexplained to the audience, Beverly realizes that David probably has no family because he has driven them away or perhaps even killed them. 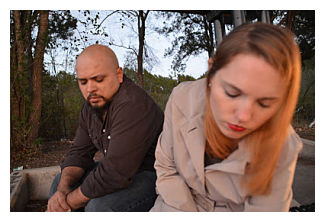 The playwright interrupts the early building tension of that confrontation at the bus stop, leaving Beverly and David in stop motion in one quadrant as another character, Bill, steps forward.  Douglas Taylor is tall and gregarious, spieling to us like a comedy club entertainer.   Which, in fact, he is . . . except that after his previous life fell apart he became a bartender at the comedy club, with the humble privilege of doing the last comedy monologue of the night, at 1:30 a.m.

Zarate, who's both playwright and director, works the stories alternately, balancing Bill's revelation of background and his desire to connect against the clash and torment at the roadside.  Beverly becomes the link between them.  With a change of focus and position, suddenly Pittman is speaking shyly to bartender Bill in the lounge of the comedy club.  He seems to be a regular guy; she's noncommittal.  The shift in emotional content is immediate, sharp and disorienting -- the difference between drinking a martini in a safe place and being seized by the throat in the dark.  In his own good time the playwright reveals the connection between these stories and establishes a timeline for us, but not before he has made us extremely apprehensive about the possibilities.

Some of the narrative was confusing, particularly the changing story of the tormentor at the bus stop. Zarate's choice of an extremely strong and experienced cast helps the audience past those blurs. This piece is rationally irrational, one that keeps you guessing and wraps you up emotionally.

Perhaps the weakest moment is the opening pantomime.  The lights come up and three actors are in that divided square defining the playing space.  They silently engage in a children's game similar to that known as "foursquare."  Each is in a quadrant; whenever one steps across into the space of another, the incumbent retreats, spurring additional shifts and bounds to adjust position.  The movement was enigmatic at best and not helpful in informing or orienting the audience.   Of course, once the story had been told, you could see that it was intended as a prefiguring of the structure of the play.  And that the title Four Square was ironic, for the structure was anything but forthright or squarely evident.

All proceeds from the FronteraFest performances will go to the Creative Fund, the newly founded mechanism to subsidise venue costs for locally produced theatre. Zarate has secured a place for Four Square at this year's Edinburgh Festival in August, with Pittman and Taylor in the cast. He and his HBMG Foundation are inviting actors interested in Wolfe's part -- the unbalanced tormentor -- to contact him for February auditions. 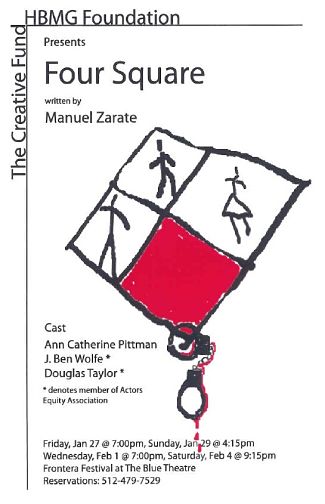