It took a while, but I finally found the word that describes Will Eno's Flu Season, produced February 27- March 8 by Austin Community College.

That word is "aggravating."

Maybe y'all don't use it here in Texas, but I heard it regularly from my mother, who came from a small town in Georgia. "Aggravating" describes behavior that is egotistical, rudely mischievous and intentionally provocative. Since she raised six sons, my Mom had occasion to use that word fairly often.

Flu Season is set in an unidentified psychiatric institute somewhere with cold weather. We witness the initial interviews of two new patients, who appear to be involuntarily committed inmates. A white-coated doctor receives a bewildered young man; then on the opposite side of the stage a nurse brings on board a quiet young woman.

We don't know or really learn the histories of the young people. We quickly see that each of the members of the helping profession is perfunctory in filling out the forms. Each is far more interested in talking about his or her own feelings. For no good reason, the doctor relates impressions of a visit to Amsterdam. The nurse babbles along cheerfully about a girlhood experience in the countryside, centering around the sight of a horse.

Playwright Eno brings on "Prologue," a dapper fairy of a man who confidently and optimistically comments upon the action but does not successfully elucidate it. Shortly thereafter we meet "Epilogue," a discontented, cynical commentator consistently countering the chirpy "Prologue." Grumpy "Epilogue" demonstrates that "Prologue" is unable to see him, and one is pushed to assume that the sour, nearly angry words of "Epilogue" are in fact those of the author. He appears to despise what he has written, the effort of writing, and the attempt to explain any human reality in words.

Yes, there is a story of sorts, as the young woman and the young man become aware of one another in group therapy and in the television lounge. Inevitably, woman needs man and man must have his mate, but intimacy does not thrive or last in the madhouse. In parallel, the doctor and the nurse gradually develop a cordial mutual accommodation that appears less fatal. And throughout this, chipper "Prologue" gradually loses his cool and "Epilogue" as the author's voice makes it clear that he wishes he had never been involved in any of this garbage.

There's much of the Theatre of the Absurd in this concoction -- for example, one puzzles to understand the terms prologue and epilogue -- which, in customary parlance, would indicate, respectively, a speaker at the opening of the piece and a speaker following the conclusion of the action. Perhaps Eno used his prologue in an early draft of the opening scenes and just couldn't get shut of him? The notional author's mouthpiece might be dubbed epilogue because the character was grafted onto a nearly finished script that the author found appalling?

These quibbles and this bare description of the plot do not do justice to the theatrical experience. There's a strong and important message here: that each individual struggles to find meaning in existence through words, describing and defining feelings and experience, an effort that seldom succeeds. Eno further implies that for the most part we are sealed up in our individuality, fated either to isolation or to facile social accommodation that is trivial or essentially meaningless.

But he wraps that bleakness in language that flashes like diamonds in the darkness. These characters are dolts or disturbed or wrapped up in themselves, but they use images and describe experiences that are profound.

Only we, the audience, are listening to them, however, and for this play to succeed, each of the actors must convey that language and those underlying emotions with great clarity.

Bobbie Oliver as the nurse is a small marvel, connecting all those dots and turning them into a tightrope stretched across the void. Every word counts. She builds a subtext and a life view for her appealing-but-not-so-smart character. Larry Oliver as the doctor comes across as a bit wooden at first, but as he opens his random thoughts and his history to us, we can accept that as a valid portrayal of this man: not a great doctor, not even certain of his capabilities, but fundamentally decent in a distracted sort of way. David Yeakle as Prologue is ingratiating in his cluelessness and he aptly, slowly falls apart as his role in the play loses meaning. Curiously, there are two actors named in the program as Epilogue, the voice of the author, even though only one appeared on stage at the Saturday performance -- a tall, squared-off young man in glasses, with an appropriately abrupt manner and impatience both with characters and with the audience.

Avery Ferguson as the young woman and James Leach as the young man fit their roles. She blooms from stolid frustration to happy warmth as their relationship develops; he is staccatto, wild-haired and blinking in phobic desperation throughout. Neither entirely masters the language with which Eno has gifted them. Although they appear to hit every syllable of the text, meaning and emotion usually fly past them. One might see that as a valid interpretation, since they have, after all, been committed to this institute because they're psychologically incompetent. But Eno's greater message about language as our last refuge for meaning is diminished thereby.

Thanks to the ACC Drama Department and director Jodi Jinks for challenging the audience with this intense and -- yes -- aggravating play. Jinks takes on the Big Question, after all, which is The Meaning of Life. That's a task a lot bigger than providing casual amusement for the college students. It was too much of a stretch for some. The blond poppet seated next to me in the front row disappeared at the intermission.

And special appreciation, again, to Peter Sukovaty for superb set design and lighting. His use of glass brick and stark white wall sections was modern and attractive while still retaining the icy institutional feel of a psychiatric institution. 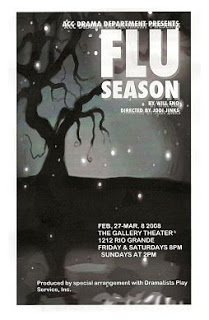