Raul Garza’s Fantasmaville won last year’s Latin Playwrights award even before it had been produced.

I’ve been anticipating the show for months, because I read the play last August. In fact, I auditioned for the “cranky old man” role of Akers, which seemed to be the best fit for my age, if not for my temperament.

"Fantasmaville" ("Haunted City") is here. Garza sets it in east Austin, complete with references to César Chavez Avenue, local schools, Capital Metro, Wheatsville Co-op, and even to a recent project to establish a dog park.

As I read the script I was charmed by the magical realism of the piece, in which an enigmatic spirit in the shape of a gigantic raccoon has been watching over the middle-aged party lady Flor, frequenter of beer halls who hasn’t lost a single dice game in the past 18 years.

And by the humor -- Flor’s daughter Celeste is an ambitious, underemployed idealist who, without informing her husband, jumps at the chance to offer foster care – only to discover that their new ward is in fact the cheeky local paperboy, Joaquín.

The chorus for this confusion is a pair of muddle-brained beer drinking buddies, Gustavo (Donato Rodríguez III) and Freddy (Rupert Reyes), operating on the principle in Tecate veritas.

Teatro Vivo has given the piece a beautiful production in the Rollins Theatre at the Long Center. The scene looks bleak when you arrive – a couple of couches and a bed, no more – but the panels behind each of these furnishings transform into video screens. With a click of the back projectors the scene switches from a bus in motion across an animé landscape to a living room to the interior of a tavern. Actors still have to tote a bit of furniture between scenes from time to time, and the faint glow of the screens silhouettes such moves – in fact, after one beloved character collapses and dies under a magical hex, that actor then has to scuttle backstage across that dimly glowing background. But such minor visual giveaways can certainly be forgiven. 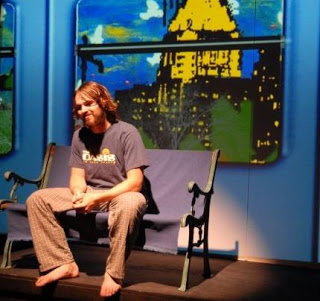 Patricia Arredondo as the prancing, partying Flor has great gusto and a pack of juicy put-downs for some of the other dubious ladies of the neighborhood. Arredondo may just be herself, for her blurb in the program could accurately be applied to the character: “Patricia Arredondo is a versatile and energetic actor, delivering performances that teem with physicality, comedy and sheer reckless abandon. . . She is every bit as crazy as she looks.” 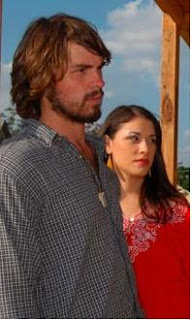 As I watched the action unwind, I realized that this is not, in fact, a happy story at all. The real protagonists of this play, Flor’s daughter Celeste (Karinna Pérez) and her Anglo husband Martin (Chase Wooldridge) are in serious conflict both with one another and within themselves.

In the opening scene on the bus Martin tells us a rambling story about middle school, twenty-two years ago, when he turned his back on his Tejano friends because they weren't “cool.” He is still looking for one of them, to re-establish that contact.

Celeste is angry at her irresponsible mother, frustrated with the lack of political engagement of her Latino neighbors, and unsuccessful in her search for full time work. Celeste tells the phlegmatic, pragmatic social worker Sonia that since she can’t get a real job, she is thinking of starting a family. 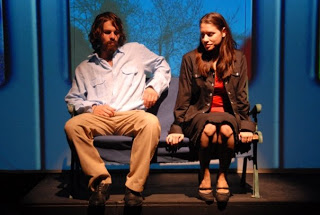 But Celeste never voices that desire to her husband Martin. Never. She speaks harshly to him, rejects his bumbling efforts to reason with her or console her, and insists on being left alone. Not even in a final, maybe hopeful scene on the bus do we hear a word of reconciliation between them -- earlier, Sonia coached Martin to put his arm around the despairing Celeste, but the gap between them persists.

Akers, the scrawny, resentful white man on the block is so spiteful and dismissive of "mojados and the rest of those people," including specifically Celeste, that he goads Martin into punching him out. David Blackwell in this role has a reptilian stillness and flat Texas accent that makes him scarily real -- all the more so when we learn of the cross-cultural scarring that made him that way.

Garza works to balance the two visions of Latino experience -- the magical, imaginative celebration of pleasures on one hand, and the tight-lipped lower-middle-class dealing with daily difficulties, on the other. But the melding of those two traditions is a brittle and not entirely successful one. Garza gives Celeste insight and information, but he has to resort to the "deus ex machina" of the raccoon spirit accompanied by a visitor from the afterworld to do so. The scene is entertaining, but we are not convinced that it provides any lasting spiritual solace to Celeste. 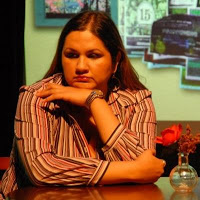 Erica Saenz as Sonia the friend and social worker is a solid, sympathetic presence, and Mario Ramírez as the newspaper boy Joaquín gives us a portrait of a Tejano who is disadvantaged but confident about his own abilities and future. They are the middle ground, really, representing Latinos who have faced economic and social realities and applied themselves to capture the possibilities. 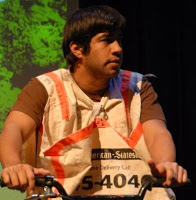 In the end, Fantasmaville is a gentle, insistent admonition to the audience that real people populate east Austin. This is no brownface comic show; it is a reminder that while cultural differences persist, Tejanos face the same dilemmas as the rest of us.

Click for review on Decider.com and interview with playwright Raul Garza

KUT audio feature "A Funny Take on Gentrification," including dialogue from Fantasmaville, commented by Julie Moody, with interviews (4 minutes)