Lights go down, then up again on two buddies, Doug and Peter. They're brainstorming ideas for a play, or at least a script. Pirates? Space? Space pirates? The one-liners zip back and forth, the actors strike attitudes appropriate for close-ups, and that damned canned laughter sets the rhythm. As the guys rapidly unfold the plot elements (chuckle), the semi-crazed handyman Roy wanders across the back of the house waving tools, plugged into his Walkman  (anticipatory exclamations)and trips over a toolbox (laughter).

Rotund Peter (Matthew Butterfield) avoids answering insistent phone calls from his recent bride, Allison; lanky Peter (Philip Kreyche), proprietor of the house, recently broke up with a gorgeous girlfriend and is trying to forget by immersing himself in the writing project and in house repairs. He has found this handyman Roy (Mick D'Arcy) who's a bit weird but is really inexpensive. . . . 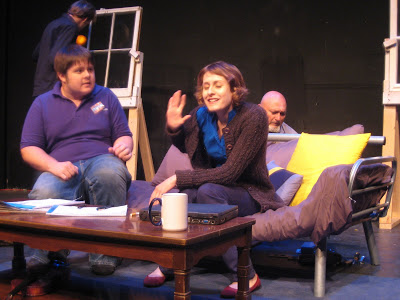 TV sit-com writing is the emptiest writing I can imagine. Generally, the writing team aims for lowest common-denominator laughter, building quirky characters and bouncing them off one another with quips and posturing. The plots are episodic and no one learns anything but the most obvious lessons: life is consumer-friendly, eternal and holds no problems greater than a misplaced credit card, a misplaced leer or a loony delusion.

This kind of TV is a constant diet of Hostess Twinkies.

That's where Drywall digs in, with sharp fangs.

This one-acter, in development for a longer version, conditions the audience with that all-too-familiar script approach, complete with canned laughter and the broad, broad acting style. Kreyche holds that arch grimace, eyebrow raised high, while Butterfield rattles along like a happy idiot; they trade fine Hollywood stichomythia, ping-ponging insults, suggestions, and dismissals. We even get the ancient old comic sequence I'm hungry! What/where do you want to eat? [10 Austin-specific suggestions are made and dismissed, with commentary, punctuated with canned laughter]

As this happy idiocy unfolds, the audience begins to get a view of a dark story beneath the surface. There's a moment, marked with a sudden shift of lighting, when handyman Roy speaks with real pain to an acutely uncomfortable Peter. How much of this acted TV script is under control? What is going on within this theatre script, which is suggesting to us that we're an audience in a television studio? Are these fictional TV characters going to break down into their identities as fictional TV actors? Are we headed for something that will not, repeat NOT, be acceptable on network TV or even on cable TV?

Given their paucity of imagination, we're not at all surprised when Doug and Peter finally hit upon the idea of writing a play about Roy the deranged handyman.

After all, in this TV script Roy is really, really funny. He's cheap labor but he's only half competent. He thinks he was married to Joanie Mitchell. He raves. He talks about his deceased wife and deceased son. He screws up a repair and gets a tremendous electric shock. He discovers that the boys have been recording him. 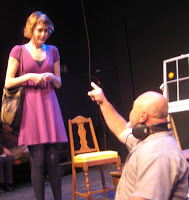 When Doug's bride Allison (Delaney Jo Liming) encounters him in the deserted house, Roy gets really earnest with her. She flees.

David Meyers' direction captures the TV style precisely, and he's got some good actors to work with. Kreyche and Buttefield make a visually comic buddy pair but they play it with the droll control of a young John Cleese and a young Dudley Moore. Mick D'Arcy says in his program blurb that he has done 78 shows and is leaving for New York. If so, Austin is losing a character actor with a manic gleam and enormous stage presence. Delaney Jo Liming as Allison does not have a lot to do in this one-act version but she does it well.

Let's encourage writers (playwrights) David Meyers and Patrick Kniseley to get the full-length script written, polished and produced. I am much more interested in seeing the multilayered Brechtian theatre version than in seeing Drywall on the tube. 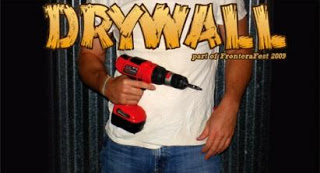